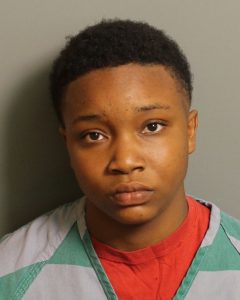 CENTER POINT — On April 27, Center Point Elementary School was placed on lockdown as deputies searched for a suspect in a robbery that occurred in the parking lot of a nearby apartment complex.

Detectives arrived on scene and reviewed surveillance camera footage from the apartment complex, upon which photos of the suspect were captured. These photos were distributed to Patrol and School Resource Deputies in the area, and over the following days a suspect was developed from the photographs.

On May 13, detectives went to the home of 17-year-old Takedra Vernay Booth and spoke with her and her mother. Booth initially denied any involvement in the robbery then admitted it once confronted with the video evidence.

Takedra Vernay Booth of Center Point was charged as an adult with five counts of Robbery 1st Degree. She remains in custody with bond set at $110,000.