Collin LaFon ditched his wheelchair to walk across the stage and accept his diploma. Photo by Ron Burkett/The Trussville Tribune

TRUSSVILLE –Collin LaFon is well known to his classmates the Trussville community as a state champion in track. He holds state records in shot put, discus, javelin, and the 100.  He’s well recognized among his fellow students as he maneuvers  his wheelchair through the hallways of Hewitt-Trussville High School. But during Tuesday night’s graduation ceremony, attendees saw another side of LaFon as he stood up from his wheelchair and walked across the stage to accept his diploma.

The decision had come early enough for LaFon to make a practice walk during the rehearsal on Monday. He made it across the stage without crutches, but decided to use the crutches during the actual ceremony, his mother said.

“He was a little nervous to do it without his crutches in front of such a large crowd,” Michele LaFon said. “He uses his crutches around the house, but it’s just not practical at school.”

When Collin LaFon rose from his wheelchair on the stage, he was greeted be a thunderous applause from his classmates and the crowd. Everyone on the stage joined the crowd in standing to cheer the Hewitt-Trussville senior.

This fall, Collin LaFon will be playing wheelchair basketball in college at the University of Illinois in Champaign, Ill.

Watch the video below to see Collin LaFon make his walk to accept his high school diploma 1:05:31 mark. 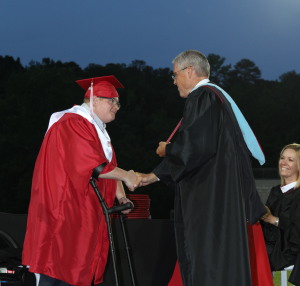 Collin LaFon ditched his wheelchair to walk across the stage and accept his diploma.
Photo by Ron Burkett/The Trussville Tribune