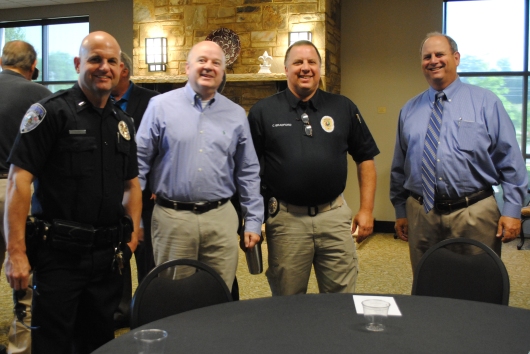 More than 100 turn out to 2nd annual First Responders Breakfast 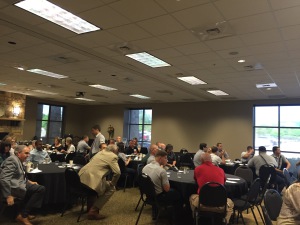 Breakfast began with a message of welcome from Melissa Jones, past Chamber President, followed by the pledge of allegiance and the blessing of the food, before Friends of the Trussville Library served breakfast to those in attendance.

Pete Blank with the Personnel Board of Jefferson County was the featured speaker. Blank has worked for CBS42 as a sports reporter, and also served in a variety of roles in the Walt Disney Company, with the most recent role being Learning Manager with Disney University.

After Blank and his family survived an F3 tornado in January of 2012, he is able to relate first hand to the importance of first responders and their sense of urgency.

Blank’s home was leveled in the tornado and subsequently he and his family were trapped below the rubble, relying on first responders to get them out. Blank said even after everyone was rescued, the police and fire departments hung around the neighborhood for months, keeping a watchful eye out.

Although we are trained from a young age about the importance of being first through practices like follow the leader, Blank made the point that for first responders, they haven’t chosen a career where they need to fight to be first. 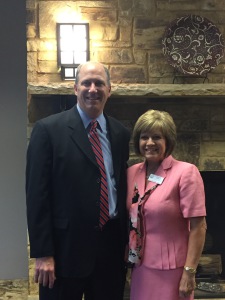 With Blank’s background in news, he said for media, it’s all about being first, because there’s money being made when someone is first, but for first responders, they’re always first, even though the tasks they complete on a day to day basis aren’t always reported in the news.

“Being a first responder isn’t about you, it’s about everybody else,” said Blank. “You go into danger and deal with the risk head on.”

Overall Blank said he’s thankful to live in a community where first responders make Trussville a great place to live, work and play.

“Being first in your mind is about giving to others, taking care of others and giving your best each and every day to this fantastic city,” said Blank.