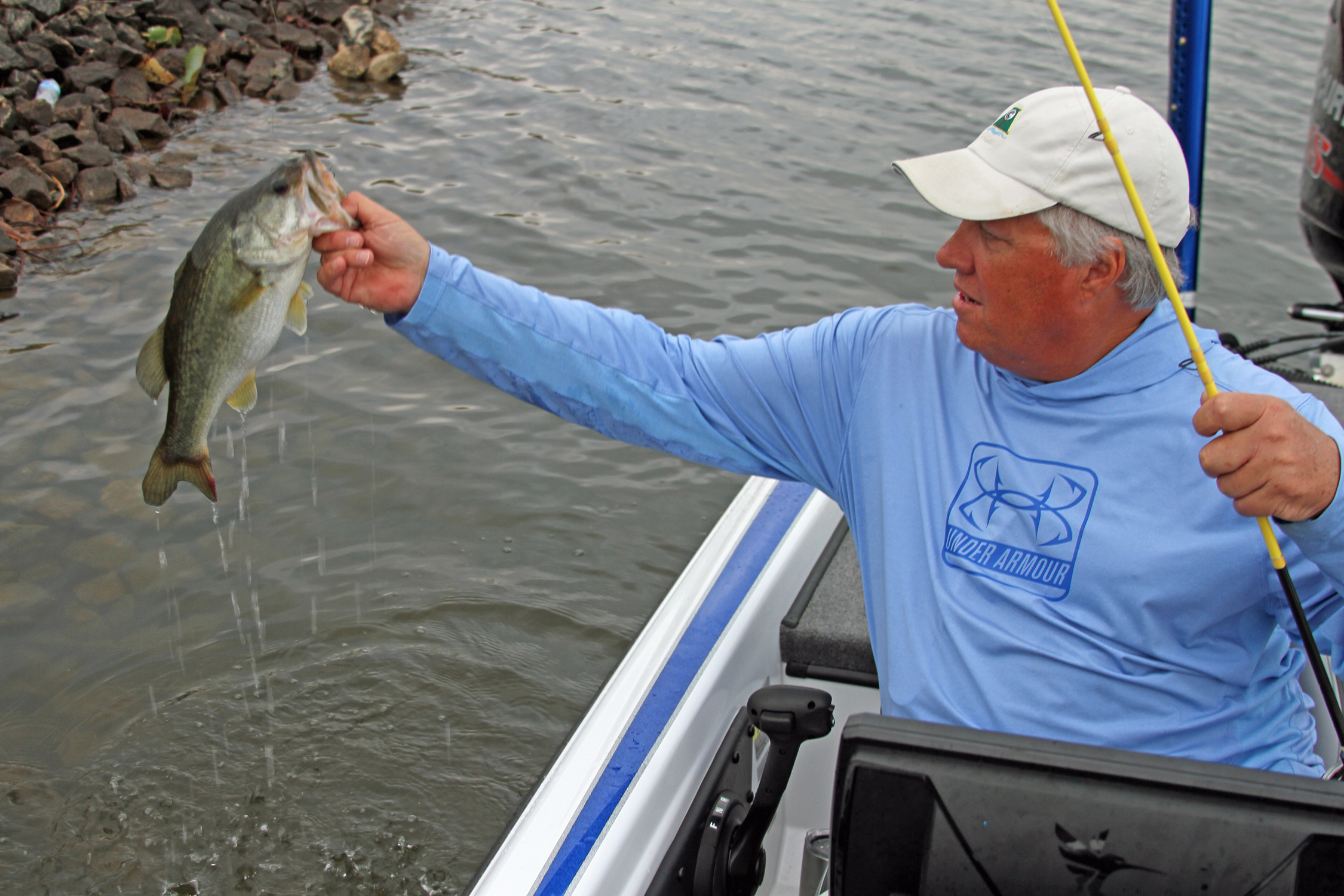 Jack Tibbs, a lifelong bass fisherman and Mayor of the City of Eufaula, enjoys the lake's return to prominence among the nation's top bass lakes. Tibbs says Eufaula has something to offer for every style of bass fishing from shallow vegetation to deep-water ledge fishing.

Posted By: Online Editoron: May 29, 2016In: Opinion, Outdoors
Print Email

Any angler who fished Lake Eufaula during a down cycle in late 2010 and early 2011 will be glad to know the 46,000-acre impoundment on the Chattahoochee River in southeast Alabama has rebounded to its former glory.

During that down cycle, Jack Tibbs, who has fished Eufaula for about 40 years, said bass were being caught with “5-pound heads and 2-pound bodies.”

In 2009 the lake had a sizeable acreage of hydrilla. Then came a cold spring in 2010 with a lot of high, muddy water. Also, the Army Corps of Engineers released a large number of grass carp in the lake. That combination severely impacted the hydrilla.

Tibbs said during the six-year span of extensive hydrilla habitat, the bass became accustomed to thriving in that environment. When the grass was suddenly gone, the fish struggled to adapt.

“Just like Lake Guntersville and Santee Cooper (South Carolina), any lake with a lot of vegetation, when the vegetation is sprayed or something happens naturally to knock it back, the fishing takes a big hit,” Tibbs said. “It takes a little while to come back.

“That’s what happened at Eufaula. In 2009, it was taking 25-pound (five-fish limit) bags to win a tournament. All of a sudden, we were struggling to catch fish here.”

Since that down cycle, the hydrilla and other habitat-friendly vegetation have returned to Eufaula, and the lake has responded accordingly.

“We started seeing improvement in late 2011,” Tibbs said. “By 2012, the lake was almost back. It’s been getting better every year since then.”

Bassmaster Magazine ranked Eufaula the 21st best bass lake in the nation in 2015.

“In that article, it mentioned that at one of the Alabama Bass Trail tournaments on Eufaula last year it took a 29-pound bag to win,” Tibbs said. “That’s a big bag just about anywhere you go. The year before, I actually fished that Alabama Bass Trail tournament. It took 25 pounds to win that year. We had 17 pounds and finished in 33rd place. That tells you there were a lot of good bags of fish weighed in.

“This year, the lake has really showed out. There have been numerous mid-20-pound stringers this year. At one tournament, a guy caught an 8 1/2-pounder and thought he had big fish. But a guy came in with a 9 1/2-pounder. The lake has really showed out the last two years, and we’re really excited about the direction the lake is going in right now.” 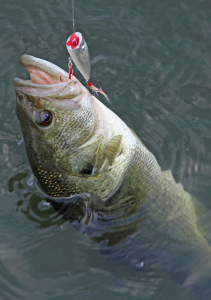 Jack Tibbs, a lifelong bass fisherman and Mayor of the City of Eufaula, enjoys the lake’s return to prominence among the nation’s top bass lakes. Tibbs says Eufaula has something to offer for every style of bass fishing from shallow vegetation to deep-water ledge fishing.

As a fishing lure manufacturer, Tibbs acknowledges he’s not a fisheries biologist, just a fisherman.

“In my knowledge as a fisherman, the hydrilla seems to be the driver in the food chain,” he said. “Everything seems to get in that hydrilla. When they’re living there, they seem to do very well. All the things the bass eat – bream, crawfish and other critters – do well in the hydrilla. It just becomes a food factory.

“We also have acres and acres of lily pads. And we have water willow, which is fun to fish. It’s easy to get a bait through it, and the bass seem to relate to it really well. The vegetation is probably the No. 1 driver. When you look at lakes, like West Point, that don’t have as much vegetation, the fishing is not quite as good. You’ve got to have places for the fry to hide to keep the fish population up.”

Tibbs said Lake Eufaula has something for just about every type of bass fisherman, from deep-water ledge fishing with deep-diving crankbaits and Carolina-rigged plastic baits to explosive shallow-water fishing around the lily pads and water willow.

He also said Eufaula fits his favorite type of fishing to a tee.

“I’m primarily a shallow-water fisherman,” Tibbs said. “I like the shallow grass and the shallow cover. It used to be that a spinnerbait is what you used around that type of shallow cover, but now there are several techniques that will work. Now you can throw swimming jigs, chatterbaits, frogs and swimbaits. All those techniques work, depending on the situation with the lake.”

What Tibbs and I took advantage of recently was another feature that holds fish on Eufaula – abundant riprap, the large rocks that prevent shoreline erosion but also provide cover for a variety of bass forage.

When the shad are spawning along the riprap, small topwater plugs like the Pop R and Tiny Torpedo will mimic a flipping shad and the bass can’t resist.

After the shad spawn and weather starts to turn warmer, Tibbs said the focus then turns to bream.

“I also throw a frog a lot that time of year in the pads and grass cover. The cover closer to deeper water is better when it gets hot. As long as the water stays up in the lily pads and cover, there is always some good fish up shallow in Eufaula.”

The lake level at Eufaula is controlled mainly by the Army Corps of Engineers according to power generation, flood control and municipal water usage upstream.

“There are a lot of variables,” Tibbs said. “Traditionally, if the water stays up, the shallow fishing is tremendous. If the water happens to fall out of the grass, then you go to the river ledges. You use your electronics to look for fish and baitfish. It takes a little more experience, but most fishermen know how to do that.

“Eufaula is more diverse than it used to be. There are a lot of boat docks and riprap. So the lake is suited to just about any skill level or the preferred way people like to fish. Most of the time, you can come to Eufaula and find the way you like to catch them.”

Tibbs knows very well the impact the fishing at Lake Eufaula has on the local area and economy. He not only manufactures fishing lures, he serves as Eufaula’s mayor.

“The fishermen are the top of the food chain when it comes to tourism in our area,” he said. “I’m a tournament fisherman, so I travel. Normally, when a fisherman comes to Eufaula, he is going to stay multiple days. He’s going to fill up with gas and eat at our restaurants. If he brings his wife, there are nice shopping opportunities.

“Fishermen tend to spend quite a bit of money, so it’s really important that the lake offers good fishing to keep attracting folks to our area and make sure they have a good time when they come.”

Visiting anglers and nature lovers can grab a ringside seat to the action on Lake Eufaula at Lakepoint Resort State Park, which is located on the lake north of the City of Eufaula. The park has plenty of lodging and a huge boat ramp near the mouth of Cowikee Creek, one of the bass fishing hotspots.

Because Lake Eufaula is a border lake between Alabama and Georgia, a reciprocal fishing license agreement is in effect. The agreement covers Lake Eufaula proper but does not include the tributaries that flow into Eufaula on the Georgia side.