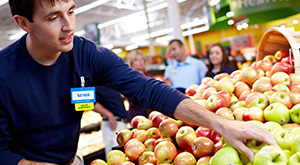 TRUSSVILLE — Walmart announced on May 24 that they had hired 3,908 veterans in the state of Alabama since they began their Veterans Welcome Home Commitment in May 3013. Of those hires, 412 Alabama veterans have been promoted to higher paying jobs within the company.

Through the Veterans Welcome Home Commitment, 130, 828 veterans nationwide have been hired at Walmart.

“When I sent out applications, Walmart was the first to get back to me,” said John Mark Hunter, a Hayden native who was honorably discharged from the Marines. “My military experience has helped me with managing my tasks and making sure I get everything done the right way and in a timely manner.”

Hunter was previously deployed in Afghanistan as a tank commander, and was honorably discharged in October 2015. He began working as an overnight stocker at the Walmart Supercenter in Gardendale last March.

On Memorial Day of 2013, Walmart began their Veterans Welcome Home Commitment, which guaranteed a job to all eligible, honorably discharged veterans who were within 12 months of active duty. Walmart originally planned to hire 100,000 veterans by the end of 2018. However, Walmart announced the expansion of the original project in May 2015, and the new goal is to employ 250,000 veterans by the end of 2020.

According to Gary Profit, senior director of military programs for Walmart and retired Brigadier General, it is important that veterans have a strong support structure when returning to civilian life.

“A job is an important part of that transition,” said Profit, “and at Walmart, we’re proud to use our strengths as one of the nation’s largest employers to be a part of the bridge back home by providing meaningful experiences to 3,900 veterans, and counting, in Alabama to use their unique talent and skills.”

According to the United States Bureau of Labor Statistics, many veterans from the Gulf War Era are still unemployed or underemployed.

In addition to their initiative to hire eligible veterans, Walmart has also given a $1 million grant to the American GI Forum National Veterans Outreach Program, which gives veterans housing and job assistance to veterans in Texas. Walmart has also awarded a $1.6 million grant to Swords to Plowshares, which enhances innovative employee training for California veterans.

“Veterans are among some of our strongest associates,” said Profit, “and we’re pleased to see the growth and success they have achieved at Walmart.”