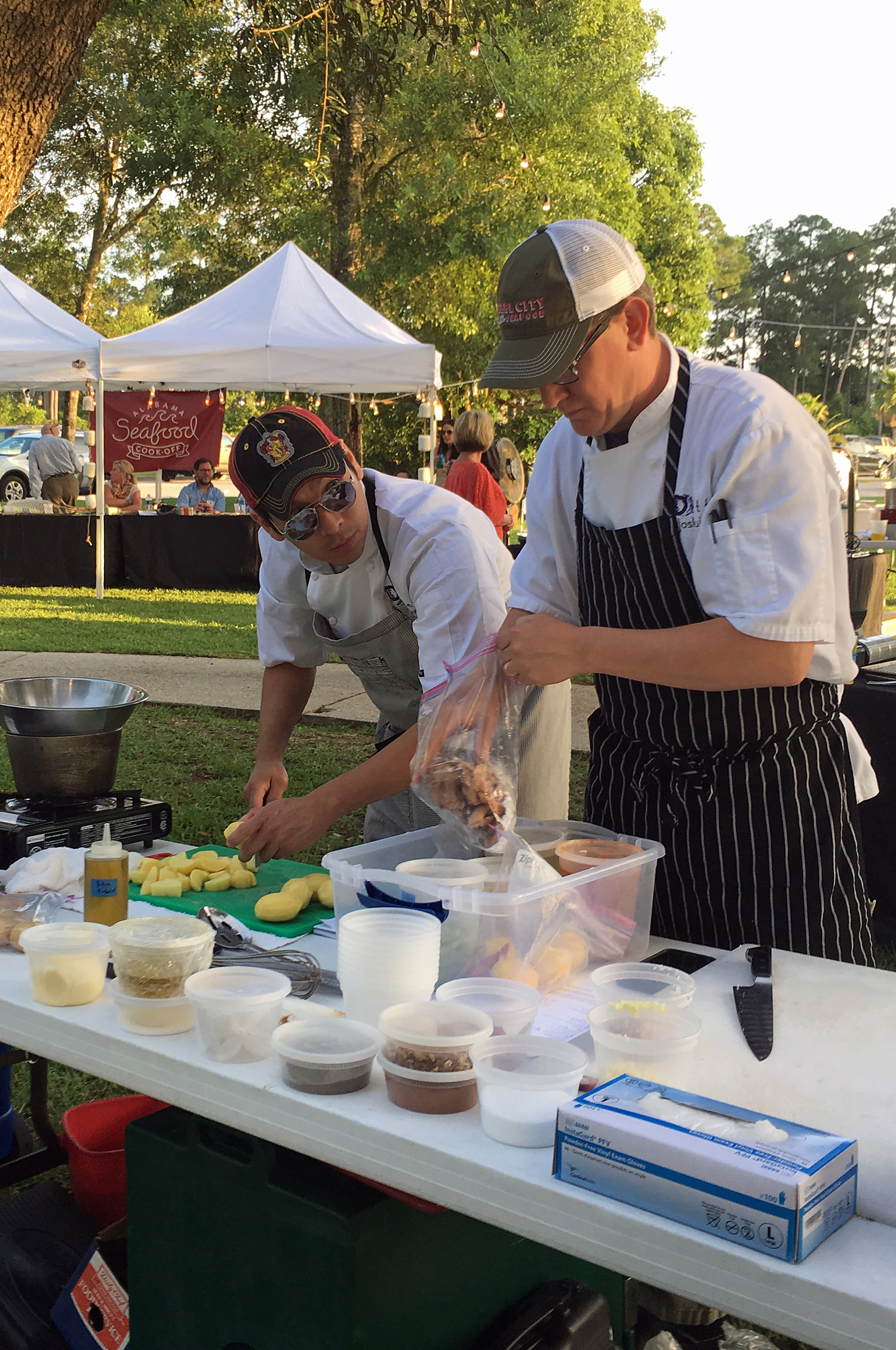 Chef Josh Quick, right, and his sous chef, Gino Jacobsen, of Odette in Florence scramble to prepare their winning red snapper dish in the allotted time of one hour during the Alabama Seafood Cook-Off at The Wharf in Orange Beach recently.

If there’s one thing that will pique my interest without hesitation, it is Alabama’s fresh seafood.

The Alabama Seafood Cook-Off opened the festivities at The Wharf’s Heron Pointe, where four top Alabama chefs were pitted to determine who would advance to the Greater American Seafood Cook-Off later this summer in New Orleans.

While Miss Kay Robertson of “Duck Dynasty” fame chatted and posed for photos, the judges had the unenviable task of choosing the top dish. They managed to persevere and made the choice.

And the winning dish, drum roll, please; it was red snapper, of course, the tasty reef fish that basically made Orange Beach a mecca for anglers who want to catch this species that abundantly inhabits the vast artificial reef zones off the Alabama Gulf Coast.

Chef Quick also automatically qualifies for the 2016 World Food Championships, which will also be held at The Wharf this September. 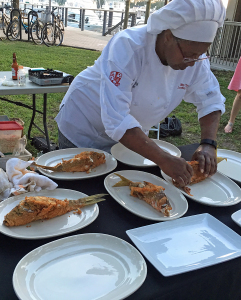 One of four finalists in the cook-off, Chef Gillian Clark of Kitchen on the George in Mobile, prepares her whole fried fish dish for the panel of judges.

With the champion crowned, the Alabama Seafood Summit moved to its goal of promoting Alabama’s delicious seafood through education and networking among the producers, distributors and end-users.

Sherrill, who deals with the price of fresh seafood on a daily basis, has been on a quest to take underutilized species, like sheepshead, gafftopsail catfish, jack crevalle and even bonita, and prepare dishes that appeal to a wide array of customers.

“Now that’s a big acronym but it encompasses everything I’m passionate about,” Sherrill said. “It started out of frustration with some of the limits and regulations. When we first moved down here from Birmingham, all we served was snapper, grouper and all the great fish everyone talks about. As things got tighter and tougher, we were falling into the trap of imports. We wanted to get out of it but didn’t know how.

“So I started looking at other species out there that I could turn into great culinary experiences. We started eating weird things out of the Gulf, and then it turned into a passion.”

The start of Sherrill’s quest coincided with the start of an invasion of a dreaded species of fish into Alabama waters. The lionfish is a prolific invasive species that can take over a reef system in a short period of time. The main avenue of harvest of lionfish is through the diving community, which makes it difficult to deter the spread of the fish.

Sherrill said he got a call from Blankenship, who suggested the chef develop some lionfish recipes and help get the word out about how delicious the white, flaky filets could be. Of course, another goal was to dispel the rumors that the fish’s meat is affected by the venom in the fish’s fins.

“We got our hands on them and found the lionfish to be one of the best-eating fish in the Gulf of Mexico,” Sherrill said. 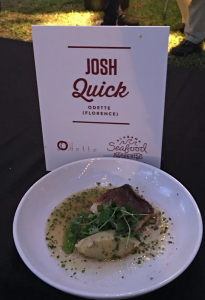 Sherrill said a lionfish derby was held in Pensacola, Fla., recently and divers brought more than 8,000 lionfish to the docks during a 72-hour period.

“And the lionfish are getting bigger,” he said. “We used to see mainly 8-inch fish. Now we’re seeing 12- and 14-inch fish. So ask your restaurant about lionfish, and if you get an opportunity to try them, please do.”

One species that fishermen consider a bycatch is the jack crevalle, which yields a bloody filet. However, Sherrill has overcome the stigma of that appearance.

“We treat it like beef,” he said. “We marinate it and grill it like we would beef. Chris (Blankenship) had a group of congressional staffers down to show them how many red snapper were on our reefs. That night, we fed them at our restaurant. I cooked the snapper several different ways, and I also grilled some jack crevalle. When dinner was finished, there was snapper left but all the jack crevalle was gone.”

A grocers’ panel and food service panel followed before Capt. Troy Frady shared his experience in the charter boat business and how he adapted to the regulations and limits that Sherrill mentioned. He changed his business model to appeal to a certain niche of Gulf Coast visitors.

“On my website, I asked what my customers wanted to do,” Frady said. “To my amazement, 85 percent said they just wanted enough fish for dinner. The people who want coolers full of fish, they’re not my customers. I target families and people who just want to go fishing and enjoy the experience.”

“I appreciate Chris Sherrill speaking about his NUISANCE Group. That’s really a good initiative that we’re trying to push because we have species like Spanish mackerel, king mackerel, mullet and sheepshead that we land an abundance of commercially in Alabama that aren’t usual items on restaurant menus. Using great chefs, like Chris Sherrill, to highlight those dishes with the underutilized species is very important to get those species on the menus.”

One new feature that was discussed during the summit is the ability to track fish from the time it’s caught to the time it hits the plate in the restaurant.

“There are several initiatives to track fish when they’re caught,” Blankenship said. “There’s a Gulf Wild program, FishTracks and Trace Register. The programs track when and where the fish was caught, through the distribution chain and into the restaurant.

“I talked to some people who have been doing business with people they met at the first Seafood Summit,” he said. “Now two companies in Bayou La Batre are this large distributor’s main suppliers for oysters and crab meat. Success stories like that are why we do the Summit.

“All four years of the Summit we’ve partnered with the Department of Agriculture and Industries. We really appreciate Commissioner McMillan’s support. We really think it’s great foresight on his part to help seafood businesses just like they do agriculture and farmers. We really value this partnership.”