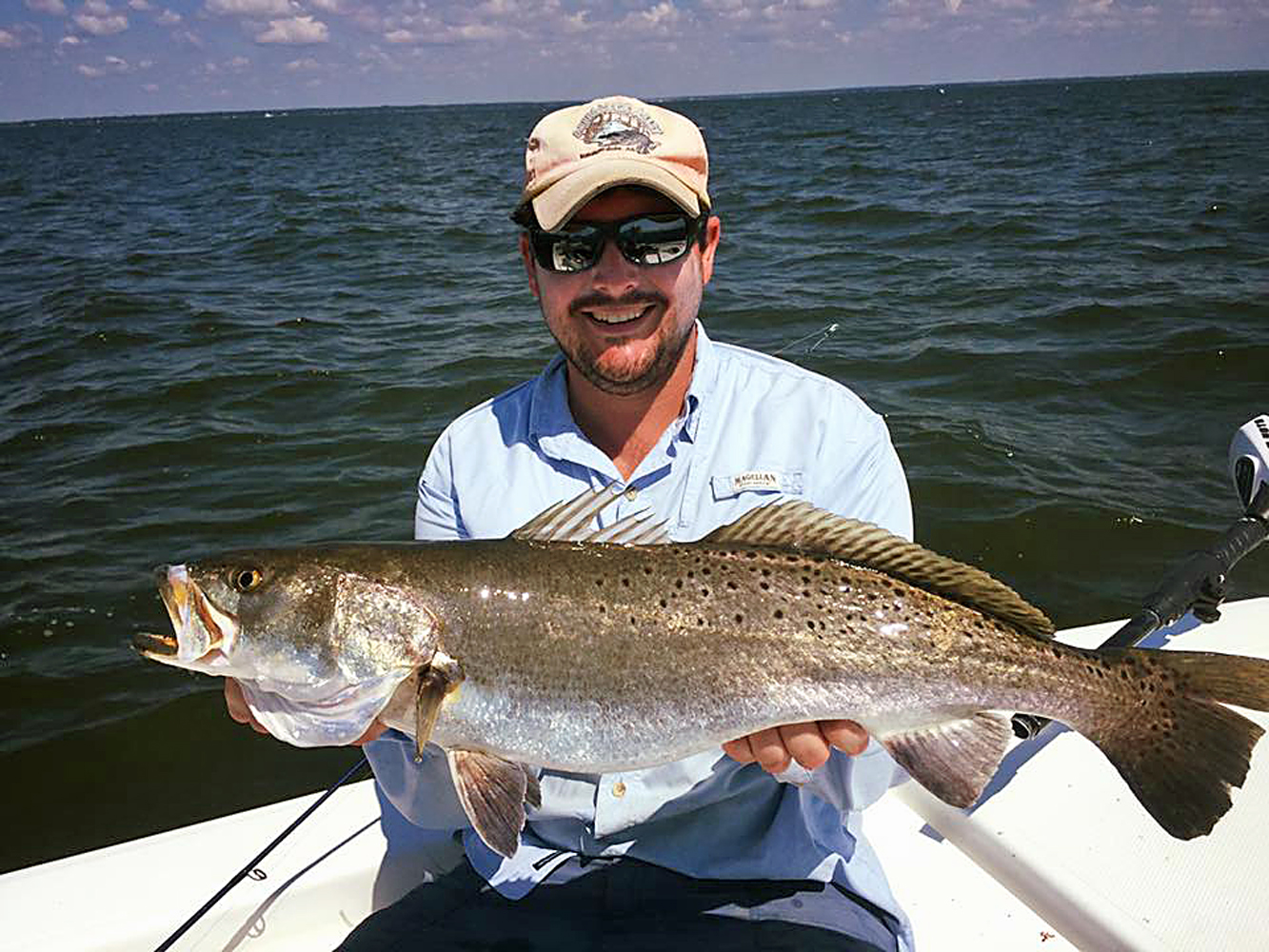 Evan Wheeler boated this huge speckled trout estimated at 8-plus pounds while fishing with Tim String in Mobile Bay.

Tim String is a happy camper again. The speckled trout fishing in Mobile Bay and nearby estuaries has been excellent this spring and early summer, which means String’s boat is full of happy campers as well.

“From last year to this year there is a 100 percent difference,” String said. “From talking to people I know and I trust, it was tough last year. The fishing just wasn’t predictable. But this year, the fishing for the 14- to 18-inch trout has been very, very good. And I’ve got a lot of 5-pound-plus fish this year with topwater plugs and live bait. It’s really different than last year, thank goodness.” 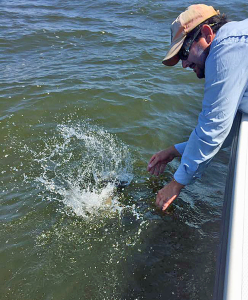 String took a photo and Wheeler quickly released the fish.

String said he really can’t explain why the fishing is so much better this year, but he does know the weather has been different.

“This year we’ve had a lot of water coming down the rivers,” he said. “It started in April. I don’t know if that’s it, but last year it was so unpredictable. One day we would smash them, and we’d go back the next day and couldn’t find the fish. I had to look for the fish a lot more.

String said he is seeing more and more signs that the shrimp crop of 2016 is definitely better than in the past couple of years.

“Last year, the shrimpers were catching them, but they really had to work at it,” he said. “This year, I’ve seen them pulling all the way past Gaillard Island up to McDuffie (coal terminal) and raising big bags of shrimp. There have been shrimp boats in places that I haven’t seen them in the last few years.”

String said one theory of why the trout fishing was tough the previous few years was the number of anglers pursuing Alabama’s top inshore game species.

“A lot of people are saying it’s the pressure that caused the tough fishing,” he said. “As we get into the summer, we’ll see what happens and see if it really is the pressure. Hopefully, the trout are in recovery. We’ll see. I do know there’s about 40 percent more people on the water these days than there used to be.”

String, who considers himself semi-retired after 25 years as a guide, mainly fishes the Eastern Shore of Mobile Bay from the Causeway to Fort Morgan. He’s seen a boost in production at the inshore artificial reefs this year.

“We’ve been crushing them on the local reefs,” he said. “I’ve been putting clients on a lot of fish. We’ve been able to catch some big fish on the favorite thing I love to do – freelining a live bait behind the boat and chumming. It’s been good every place I’ve fished. All the local reefs are producing nice fish. I caught a 5½-pound off of Zundel’s (Reef) and a bunch of 3½- and 4-pounders. Middle Bay Lighthouse has been holding fish, but it’s not a first thing in the morning deal.”

String’s philosophy as a guide is to help his clients land a nice box of trout and then start looking for big fish. When a big sow trout is caught, he tries his best to convince his clients to take pictures and then carefully release the fish.

“It’s a lot of fun catching 14- to 18-inch fish on topwaters, Mirrodines and grubs,” he said. “Then we’ll go look for big fish. It’s been good for the last two months. We’ve caught a lot of big fish on the beach at Fort Morgan, Sand Island and Dauphin Island. Now they’re moving up the bay.”

Chris Blankenship, Director of the Alabama Marine Resources Division, echoed String’s assessment of the trout fishing and added that other anglers are adopting the catch-and-release philosophy for large trout.

“Speckled trout fishing has been very good in Mobile Bay and Mississippi Sound this spring,” Blankenship said. “A few people I have talked to have not had as much luck in the Perdido Bay system. All the flood waters we had in the Delta over the winter and early spring really moved the fish down the Bay this year. That set up for some great fishing on the flats and beaches early in the day. Now that the water and weather has warmed, the fish are moving into the usual deeper water during the day pattern.

“A lot of people have set a maximum size limit on their own. Many guides are not letting people keep specks over 20 inches. This allows the larger females to continue to spawn.”

String said when the weather gets hot in late June, July and August, he takes advantage of the time slot when most anglers are not on the water.

“When it gets hot, I catch a lot of fish between 10 and 2,” he said. “I can deal with the heat because I catch a lot of fish when everybody else has gone to the house. If you’re willing to endure the heat, you can go out there and crush them at places like Zundel’s, Klondike or Fish River Reef.”

String said Mirrodines, topwater plugs or soft plastics have produced plenty of fish from the petroleum rigs in Mobile Bay to the shallow water of the Eastern Shore.

“I love throwing artificial baits, but when it comes to really big fish, you’ve got to feed them something big that looks really natural,” he said. “I occasionally catch a big one on topwater, but it’s usually a big menhaden.”

String also uses live croakers and finger mullet up to 5-6 inches. He trims the tails on the finger mullet so they can’t swim so fast.

One thing about fishing with live bait, however, is you must keep an eye out for terns diving on the bait, according to String.

“You’ve got to be watching about 40 feet in the air,” he said. “If you see the tern coming for your bait, you’ve got to yank the line to keep the tern from getting it. And I’ve had trout blow up on the bait as I was trying to keep it away from a tern. The other day, the terns hit the water about eight times trying to get the bait. It was like using a popping cork. I ended up catching the trout, about a 3-pounder.”

String has some more good news. The flounder fishing, which had suffered more than the trout fishing, appears to be on the rebound as well.

“On the beach, I know a lot of guys have been catching a lot of flounder,” he said. “I haven’t started fishing for them, but I’m planning to get some bull minnows and check the different spots like the Grand Hotel. I’ve talked to a lot of people who said it’s coming back. Hopefully, we’ll get a good run of flounder up the bay. That’s something we haven’t had in a few years, either.”