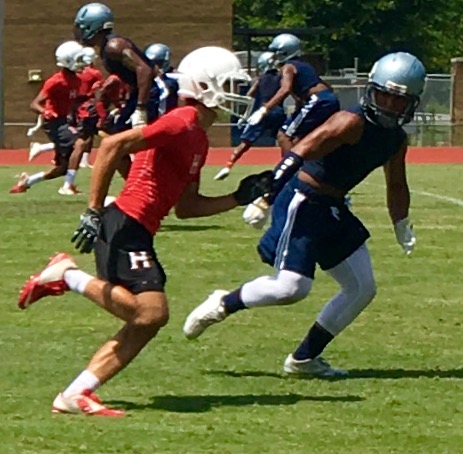 CLAY – McAdory outlasted Hillcrest of Tuscaloosa 23-22 to capture the second annual Deerfoot Invitational 7on7 football tournament at Clay on Wednesday.

The Cougars, as hosts and defending champions of this event, might have been considered the favorites, but this is a young team that’s still improving – and this is no tackle, no running, 7on7.

Clay-Chalkville had one nemesis in the event – Hillcrest. The Patriots escaped a pool play meeting 25-24, surviving when the Cougars’ 2-point conversion to essentially win the game was incomplete.

That was Clay’s only loss in pool play, but it made them the third-seeded team in single-elimination bracket play, and the Cougars ran up against Hillcrest again and their excellent running back Brian Robinson, who seemingly was open coming out of the backfield all day on short routes. The Patriots and Cougars were tied at 14 late in the contest when Hillcrest stopped a Clay drive for 2 points and a 16-14 lead. They took the ball and scored once again and made the passing PAT for another point and a 23-14 lead with seconds left. Clay couldn’t answer and the Cougars were done for the day.

Coach Jerry Hood never likes losing at anything, but he said he was pleased with the improvement he’s seen the past few weeks in 7on7 play from his young bunch.

“Our energy was good,” the coach said. “Our assignments today got better than when we last threw. On this field today, there were just two who started last year.”

Quarterback Willie Miller played well, and hooked up with all-world playmaker Nico Collins for several scores and also found his other receivers with regularity. Tyrese Sewell also had good moments at quarterback. Miller is just a sophomore and has to fill the shoes of Ty Pigrome, but Hood said he’s won the job. Sewell will back him up, and might be used in other ways because of his athletic ability.

Clay opened pool play quickly against Carver of Birmingham, Miller finding Collins with two passes, the second for a score. They also connected for the 1-point PAT. Logan Pruett also had a dazzling catch and a move that left a Rams defender simply walking away shaking his head.

The Cougars went on to beat the Rams 36-8, and followed that with wins over Hueytown 42-24 and Prattville A 30-21 before dropping the game to Hillcrest.

In the Prattville game, Clay led 28-21 with the Lions on the goal line, but the Cougars stopped them on three downs for 2 points and the win.

In bracket play, Clay beat Hueytown easily 36-16 before facing Hillcrest for the second time with the same result.

Pinson Valley, the runner-up last year, looked awfully strong. The Indians knocked off Pelham 29-11, Prattville A 30-6, Prattville B 27-19 and Gadsden City 17-11 to run the table in pool play for the No. 2 seed in bracket play.

Quarterback Jackie Matthews had a big day, as did running back/receiver Torrey Hendrix and wide receiver Liallen Dailey. Hendrix impressed with his moves at wide receiver and the ability to get open deep. 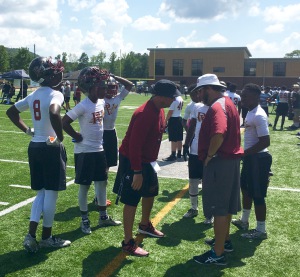 Pinson moved into bracket play, handling Prattville B 40-19 and Pelham for a second time 25-15. But Hillcrest proved too tough in a seesaw battle in the semifinals. The Indians had a 25-16 lead but the Patriots scored the final 18 points, the last 3 on an interception to end the game when Pinson could have won the game with a TD and 1-point PAT.

Pinson Valley coach Matt Glover liked most of what he saw from his team.

“We got better,” he said. “I was proud of them. They competed. And that’s what you look for. It was hot, and have to see how you can fight through it. We got some growing up to do. We got some young players.”

Defensively, Glover singled out linebacker Zapheth Cunningham and corner Ty Woods, among others.

“Hillcrest makes a play down there at the end and we miss on one. But no one remembers who the state 7on7 champion was last year ‘cause there isn’t one. It just gets you ready to compete and play somebody else.”

In the back-and-forth final, McAdory led 23-16 when Hillcrest scored with seconds left. But the Patriots’ pass for a conversion to win the game was ruled incomplete. It was tipped by a defender and caught by a receiver, but the officials ruled illegal touching because the receiver had gone out of bounds and come back in.

Hood said the big story of the day was the youngsters from all the teams that competed. “They got better. And the players were all so well-behaved. It was a great tournament.”