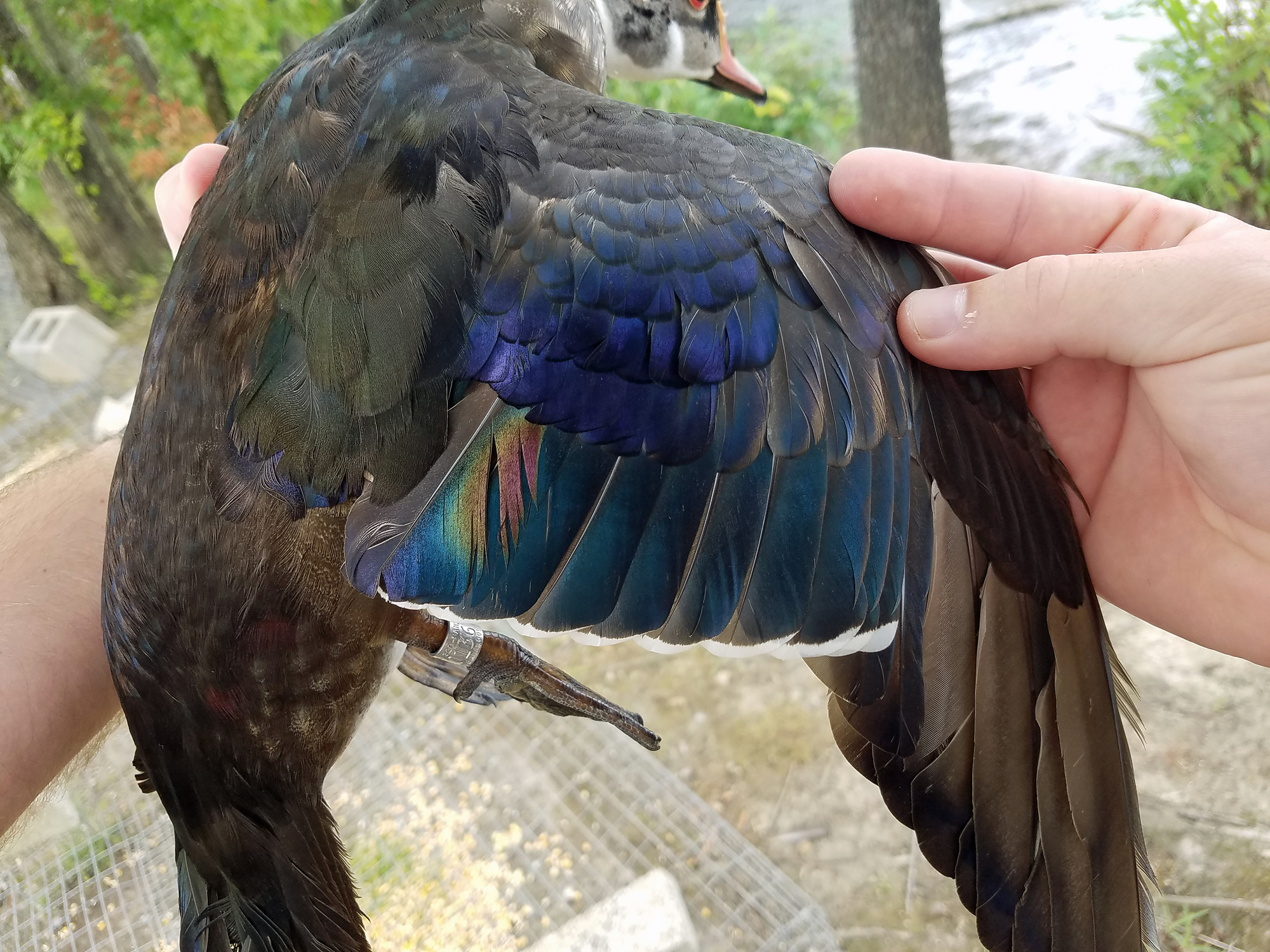 WFF learning about waterfowl in anticipation of upcoming season

For most waterfowlers, these dog days of summer dripping with humidity are for daydreaming about the season to come. That doesn’t apply to Seth Maddox, however.

Maddox, the Alabama Wildlife and Freshwater Fisheries (WFF) Division’s Waterfowl Coordinator, is gleefully slogging through a profusion of sweat to achieve an important task for many waterfowl hunters in Alabama.

The species that Alabamians are most familiar with is the wood duck. Anyone near any kind of water will likely see wood ducks some time during the year, whether it’s mating pairs or a dozen or so falling in acrobatic fashion into flooded timber.

On July 1, the WFF’s annual wood duck banding program started, and Maddox – along with a dozen or so other biologists and their staff members across the state – is smack dab in the middle. Unlike other well-known duck species, the wood duck doesn’t migrate to northern latitudes for breeding but instead chooses hollow trees or man-made nesting boxes to raise their broods right here in Alabama. This provides WFF with an opportunity to learn about survival and movements by using a much more intense survey method that involves capturing and banding the ducks.

Maddox managed to band 42 wood ducks in the first week en route to a band quota of at least 500 birds.

“The banding started out pretty well this year,” he said. “The lack of water had the birds pretty concentrated. Hopefully it will stay that way for a while so we can band more birds.” 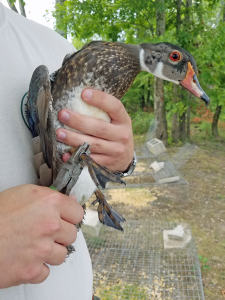 This male wood duck is in the eclipse-plumage phase with feathers that resemble the female of the species. Adults and juvenile wood ducks are captured in traps or nets, banded and released. (photo by Seth Maddox)

Maddox said WFF employs several different methods to capture the wood ducks from funnel-type traps on land and water as well as cannon- and rocket-propelled nets. The banding season can continue through September 30, although WFF personnel try to get finished by the end of August in areas that might have early teal hunting, a special season that runs Sept. 10-25.

“As far as we can tell the wood duck population is steady,” Maddox said. “We’re not able to pick up wood ducks on our aerial surveys. They’re in flooded timber most of the time so we can’t count them from the sky. That’s why the banding is so important. We derive our population numbers from band returns. We can take a look at where the duck was banded and where it was harvested. We can take a look at the percentage of the ducks banded and the number of banded ducks harvested to determine how many we are removing from the population.

“It’s even more important now because in 2008 we went from a two-bird limit to a three-bird limit. The bands tell us what’s driving the population and if we’re harvesting too many wood ducks.”

WFF also has a wood duck nesting box program in progress that will add 700 nesting boxes in areas around the state where wood ducks traditionally have been banded.

Although the duck season is basically unchanged other than calendar dates, the goose season has had a few adjustments.

“Traditionally, we’ve had a special early goose season, but we decided to get away from a special season and just lengthen the regular season,” Maddox said. “The dark goose season includes Canada geese, white-fronted (specklebellies) geese and Brant.”

The goose season will have a first segment that runs from Sept. 1-30 with an aggregate bag limit not to include more than five Canada geese, five white-fronted and one Brant.

After September, the goose season will follow the duck season dates of Nov. 25-26 and December 3 through January 29. The aggregate bag limit, however, is different during that time period. The five-bird bag in aggregate can include no more than five white-fronted and three Canadas and one Brant.

Maddox just hopes the upcoming waterfowl season is not a repeat of the 2015-16 season.

“It was a tough year,” he said. “The whole season was pretty warm. We never saw a large migration of birds that we would have if it had been a cold winter. We got a little push of birds in January, but that was about it.

“We didn’t have a lot of rain early on, but then we had a huge flood near Christmas. That opened up a lot more habitat that is not normally available to the birds. A lot of that new territory was not available to hunting, so it kind of acted like a refuge for the ducks. It was a tough duck season last year.”

While the high duck numbers nationwide of the last couple of years are expected to continue this year, Maddox warned that Alabama may not be able to take advantage.

“We’re all weather dependent here in Alabama,” he said. “We have to rely on the weather in Alabama to have a spectacular duck season. Those arctic blasts really help us out. If we get the cold fronts and the ice north of us, duck hunting in Alabama can be as good as it is anywhere.”

Although the Tennessee Valley is one of the top spots for waterfowl in Alabama, Maddox said when the weather is right, hunters can find significant populations of waterfowl in the Tombigbee River Valley and the Mobile-Tensaw Delta.

“The Eufaula area can be good, too,” he said. “Weiss Lake is hit or miss, but there are other pockets that will hold ducks.”

“We gauge duck hunter numbers according to duck stamp sales,” Maddox said. “In 2007, we sold a little more than 12,000 duck stamps. Last year, we sold more than 30,000 state duck stamps. We’ve had record numbers the past three or four years.

“I don’t think it’s all ‘Duck Dynasty.’ A lot of younger kids are getting involved in duck hunting. It’s become kind of a lifestyle thing. It’s more of social event compared to deer hunting. You can make noise when you’re duck hunting. There are all these accessories available. I think there are a lot of things that factor into the increase in duck hunting. We’re only one of two states in the Mississippi Flyway with increasing waterfowl hunter numbers. Louisiana is the only other state where the numbers are going up. We’re fortunate to get that extra revenue to put into waterfowl habitat management.”

The youth waterfowl days are set for Nov. 19, 2016 and Feb. 4, 2017. Maddox said it makes sense to have a Saturday for youth to hunt before and after the regular season. The day in February will most likely be colder and there may be more ducks around, but he really likes the idea of the day in November.

“If the youth season is two days in February, then they don’t get to hunt again until the next season rolls around,” Maddox said “November seems to be better weather and the ducks haven’t been shot at. We felt November was a good time to get the youth out there. If you pique an interest early in the year, then you have the opportunity to take them throughout the season.”