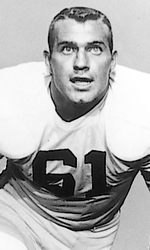 AUBURN — Zeke Smith, a member of Auburn’s 1957 national championship football team and winner of the Outland Trophy as the nation’s top lineman in 1958, died Friday, according to the school. He was 79.

Smith was the grandfather of former Clay-Chalkville baseball star Dylan Smith, who played baseball at Auburn.

“He set a high bar for Auburn football players to try to obtain, and very few have reached a level in college football that he did,” said Jay Jacobs, Auburn’s director of athletics. “The great thing is that as great a football player as he was, he was a finer man and always an inspiration to be around. The Auburn family will miss him, but his legacy and his expectations for all of us will never be forgotten”

He was inducted into the Alabama Sports Hall of Fame in 1982.

“Zeke Smith is one of Auburn’s most iconic players as our first national award winner and member of the 1957 national champions,” football coach Gus Malzahn said. “He has and will continue to be a representation of what an Auburn football player should strive to be. We are saddened by his passing and our thoughts and prayers are with he and his family.”