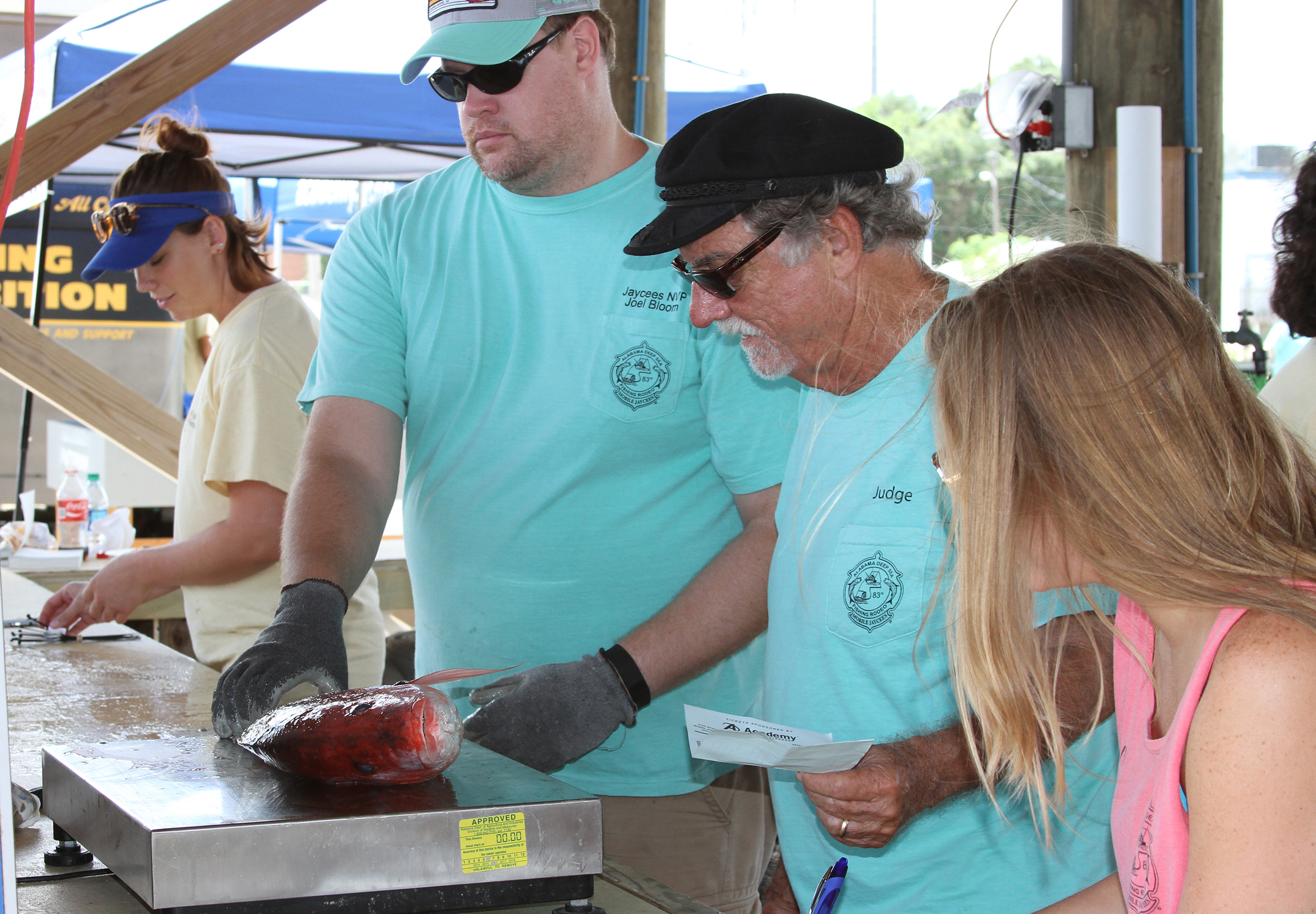 Shipp, Professor Emeritus at the University of South Alabama’s Marine Sciences Department, never would have imagined the resilience of the Alabama Gulf Coast, its ecosystem and related recreational activities when he was sitting at Dauphin Island Sea Lab six years ago.

The Deepwater Horizon oil spill had cast an ominous pall over all life on the Gulf Coast in April 2010, and Shipp thought coastal living had been forever altered. For obvious reasons, ADSFR officials had to cancel the 2010 rodeo.

“When it happened, I thought our way of life was gone,” said Shipp, longtime judge for the ADSFR, which attracts more than 3,000 anglers annually to the Alabama coast.  “I really never expected it to rebound like it has. The first year, when things didn’t look too very bad, I was still really suspicious. But as time goes on, there appears to be no impact at all. And the rodeo is a good example. We’re getting the same kind of fish as before, maybe even better than before. Certainly red snapper are bigger and there are more than there’s ever been before. 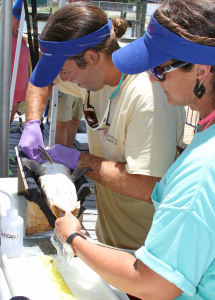 Researchers from the University of South Alabama/Dauphin Island Sea Lab, Crystal Hightower and Reid Nelson, place a tag in the 7.1-pound speckled trout caught by Trenny Woodham and then place it into a holding tank to be released back into the wild later. (photo by David Rainer)

“From a fisheries standpoint, you’d never notice there has been any impact at all. That’s not to say there’s not stuff going on in the sediments in deep water, but as far as the fisheries are concerned, you’d never know we had an oil spill.”

Although the red snapper season in federal waters is closed, Alabama state waters out to 9 miles are open through July 31 for red snapper. And the rodeo showed how big red snapper can grow this close to shore. The winning red snapper, caught by David Silcox, weighed 29.05 pounds, followed by Matthew O’Brien at 27.63 and Ryan Kennedy at 26.51.

Shipp continues USA’s Marine Sciences research work on the red snapper population off the Alabama coast. In fact, he and his crew made a trip into the Gulf on Wednesday before the rodeo started. Some of the spots checked were not regular sites but had been discovered during by the charter captains while traveling from site to site.

“What we’ve done for the last two years is go to some of these (discovered) spots,” Shipp said. “We don’t know who put what down and don’t know what kind of material it is. We go to the spots and put the camera (via remotely operated vehicle) down and fish them for 15 minutes. Every one of them is totally loaded with red snapper. The people I bring along on the trip don’t believe me that it’s not a honey hole. What you see on the camera is validated by what we catch on hook and line.”

Last week’s research trip consisted of fishing five different spots for 15 minutes at a time. Every red snapper that hit the deck on the boat was either kept for post-mortem research or tagged and released. Shipp said about 250 snapper were caught in about an hour and 15 minutes of fishing.

There was one disturbing aspect of last week’s research trip. Shipp said the ROV camera picked up not only plenty of red snapper but also far too many of the invasive lionfish.

“One of the spots with chicken coops probably had 40 to 50 lionfish on it,” he said. “I think lionfish are a serious, serious threat. I think it’s more of a threat than overfishing. They feed on young, live fish, fish that are an inch or inch-and-a-half long, which means they are competing with other species for food. Plus they’re wreaking havoc on juvenile fish.

“The one fortuitous thing about red snapper is that juvenile red snapper are not on the reef. They are on rubble or rough bottom. By the time the snapper recruit to the reef, they are too big for the lionfish to eat. But they’re still competing for food. With so many red snapper out there, I don’t know why they all don’t starve to death.”

Fortunately, Shipp said examinations of the stomach contents of red snapper indicate they can forage on species like eels and invertebrates that live in the substrate.

“Believe it or not, red snapper can also filter feed,” he said. “Not a whole lot, but it gives them something. But I don’t know what’s going to happen down the line with lionfish.”

From an economic standpoint, Jeff Collier, Dauphin Island Mayor for the past 18 years, said the rodeo, which started in 1929, is part of the fabric of this coastal community.

“The rodeo is one of the biggest events we have on the island,” Collier said. “We’ve found more ways to leverage and partner with the Mobile Jaycees (rodeo sponsors) than we ever have in the past. It’s a very positive impact on our island community.

“Most of the people down here have forgotten about the oil spill. What’s remarkable about our community is that we have recovered to the extent we have. If you roll the clock back six years, we had no idea what we would be doing in the next one year, five years, 10 years or whatever. Here we are six years later and our economy has rebounded to better than pre-oil spill conditions. I think it’s nothing short of a miracle.”

Collier said as bad as the oil spill was, it has provided an opportunity to learn valuable lessons about unexpected catastrophes.

“We know hurricanes and what we have to do in the aftermath,” he said. “The oil spill was a totally different situation. Fortunately, we made lemonade out of the oil spill. We’ve been able to come up with new events and rebranding Dauphin Island. We’re now calling the island the ‘Sunset Capital of the World.’

“So as bad as it was, some of the things that came from the oil spill turned out to be positive. We came out of it a much better community. I’m very proud to have been a part of that recovery process.”

However, Collier is aware there may be consequences from the oil in the future.

“The one thing we have hanging over our heads is the long-term effect of the oil on the fisheries or the environment in general,” he said. “We can easily gauge the economic recovery, but we have to rely on the scientific community to help us determine the impacts, short and long term, to the environment.”

Chris Blankenship, Director of the Alabama Marine Resources Division (MRD), said he and the MRD staff will remain vigilant in the monitoring of the marine environment in the aftermath of the oil spill, but he hopes saltwater anglers will take advantage of the great fishing opportunities available right now.

“The fishing in Alabama is really outstanding overall,” Blankenship said. “The spotted seatrout, red snapper and triggerfish fisheries have been off the chart this year. We are also seeing a lot of big yellowfin tuna and some of the biggest ground mullet I have ever seen.

“There are still several fisheries that Marine Resources is concerned about, including blue crabs and flounder. Those fisheries’ landings are still below average. We are continuing to monitor all the fisheries for lingering effects from the oil spill or other factors. But, we are building inshore and offshore reefs like crazy with money from the oil spill, and that should pay great dividends in the future.”