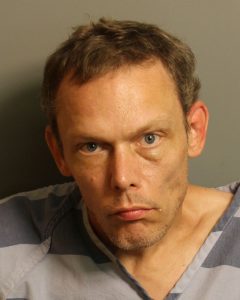 By Sgt. Jack Self, Special to The Trussville Tribune

BIRMINGHAM — Carl Leslie Statum, 41 of Birmingham, is in the Jefferson County Jail for the second time in two days after being caught breaking into cars in Forestdale Wednesday morning.

At about 4 a.m. on July 26, 2016 a deputy on patrol along Mount Olive Road stopped to help a stranded motorist. The driver, later identified as Carl Statum, told the deputy that he had run out of gas. The deputy checked the tag and discovered the vehicle had been reported stolen to the Birmingham Police

Department. Upon hearing this, Statum attempted to run away from deputies. He was captured a short distance away and arrested.

Statum was charged with Receiving Stolen Property in the first degree and resisting arrest. He posted $5,600 bond and was released later that morning.

Just before 3 a.m. Wednesday morning deputies were dispatched to the 1700 block of Neil Road to investigate several reports of cars being burglarized. One of the victims told deputies that she heard a noise and looked outside to see a man in the back seat of her car. She yelled at him and he ran away on foot.

A description of the suspect was broadcast to other deputies in the area. A deputy spotted the suspect walking down Hendrix Drive, carrying a backpack that had been stolen from one of the cars and filled with other stolen property.