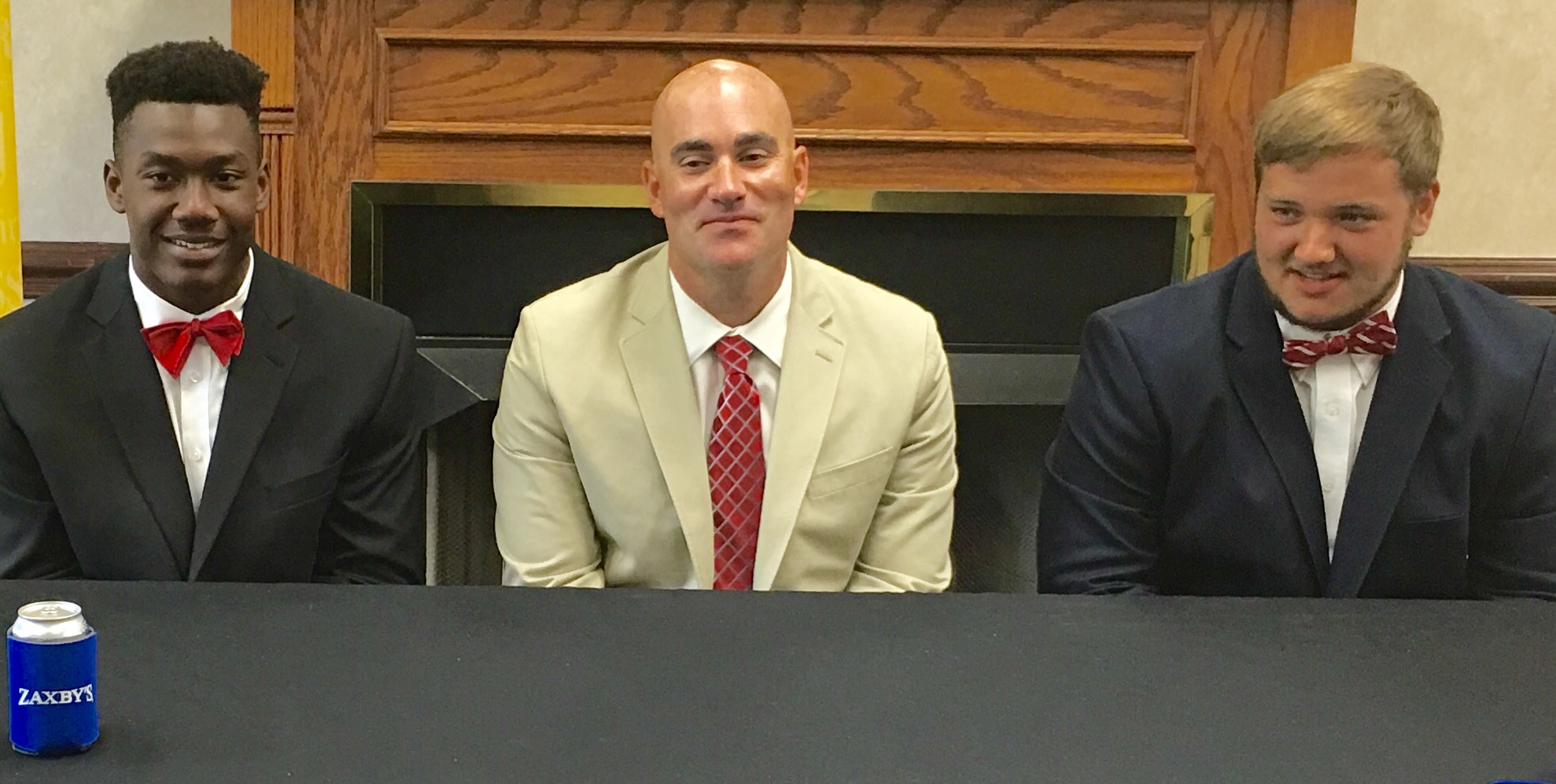 Nick Jackson, coach Josh Floyd and Chipper Lartigue talk about the upcoming season with the media on Tuesday. Photo by David Knox

All this, and more, adds up to excitement around Trussville.

“I’m really excited about the upcoming season,” Floyd said. “We’ve got the biggest senior class since I’ve been there. This is the third year our staff has been there and I think these guys have come a long way. They’ve had a great offseason. I think we’re bigger and stronger than we’ve been the last few years. We’ve obviously lost some good football players from last year’s team, but I think we have a little more depth in all on both sides of the ball.”

The depth fits the Huskies’ up-tempo philosophy – “HuskyFast” – and Floyd hopes more snaps will wear the opponent down.

That “HuskyFast” mantra carries over to the defense, said Jackson. 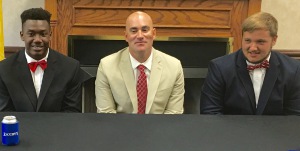 Nick Jackson, coach Josh Floyd and Chipper Lartigue talk about the upcoming season with the media on Tuesday. Photo by David Knox

“I really don’t mind playing extra snaps,” he said. “Our defense is in really great shape. Our conditioning over the summer has us ready for anything that we come to in the season.

“And we play fast on defense, we always run to the ball, always going 110 percent, it’s just the way we’re coached. We’re always prepared, even if we’ve got to play extra snaps, we’ll be find.”

The first two seasons of the Floyd era have culminated in playoff berths, but no wins yet. The Huskies are determined to break through in 2016.

“Last year, we had a pretty good year, so this year we really want to step it up and go further in the playoffs,” Lartigue said. “We’d love to win a state championship. That’s really our goal this year. We think we have the team, we have the athletes.”

Injuries late in the year – especially to quarterback Zac Thomas, now at Appalachian State – played a part in the Huskies’ not being able to make a deep run in the playoffs.

Floyd focuses on the “get better every day” process. Still, there are overall goals for the Huskies.

“It starts with trying to win the region,” Floyd said, “Because you want to try to get the best situation possible in the playoffs, hopefully have a home game or two. Hewitt hasn’t won a region title since 2008 and really haven’t won a ton before that. So I think it starts there.”

Hewitt-Trussville has moved from Region 3 to Region 4 in Class 7A. Gone are Hoover, Spain Park, Vestavia Hills and the like. In are a bunch of north Alabama schools: Bob Jones, James Clemens, Sparkman, Grissom, Huntsville, Buckhorn plus Gadsden City, the closest foe.

Hewitt will travel to Gadsden, Sparkman (Harvest) and Buckhorn (New Market) this year plus a non-region visit to Montgomery Bell Academy in Nashville. The Huskies will truly be mushing this year, but they don’t seem to mind.

“Obviously (the region placement) isn’t something we can control,” Floyd said. “I don’t think our kids are worried about it. We’ve traveled some in the past and we’re traveling the first game of the year out of the state, which I think is good preparation for that. Most of those games are going to be at least a two-hour drive. So we’ll have to leave earlier.”

“I honestly like long road trips,” Lartigue said. “It helps me get into the mindset for the game, instead of just traveling 15 or 20 minutes and getting off the bus.”

Jackson said he likes the bus rides too. “Plus, we get out of school and I really like the pregame meals.”

Hewitt opens the season against MBA in Nashville on Aug. 19. The game will be played on the turf surface of Tommy Owen Stadium, a large brick stadium with ample seating on the MBA campus.