Off the Hook has served a number of Birmingham locations over the past four years, including the University of Alabama-Birmingham campus and Linn Park.

The Trussville Downtown Merchants Association have their first Block Party planned for Saturday and the business owners were looking for something different to draw folks downtown.

Ever since the food truck phenomenon swept the streets of Birmingham, the city has become somewhat of a foodie’s heaven. New trucks are cropping up all the time, offering everything from grilled cheese to nachos to gourmet baked goods. Now, Trussville is taking part in the food truck revolution by inviting five local trucks to participate in the city’s first block party.

Rayford Cook, whose truck will attend the event, stepped onto the food truck scene four years ago.

Off the Hook has served a number of Birmingham locations over the past four years, including the University of Alabama-Birmingham campus and Linn Park.

“I was really just ready to do something on my own,” said Cook, who was an owner with Bonefish Grill in Birmingham for eight years. His experience with the restaurant, as well as with establishments like Outback Steakhouse and Red Lobster, led him to stick with what he knew. “I’ve always been in seafood and decided to stay in that, because that’s what I really like to do,” Cook said.

Cook now owns Off the Hook, which features a variety of fresh seafood choices. From fish and chips to shrimp po boys to crab cake sliders, he and his staff cook up dishes to suit a wide range of tastes. Cook stated that his customers “can always count on getting great food”, and he is looking forward to the chance to bring his creations to a new crowd.

But if seafood somehow doesn’t suit your tastes, one of the other trucks that will be present may come to your rescue. 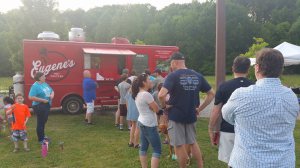 Eugene’s Hot Chicken offers a taste of Nashville, courtesy of owner Zebbie Carney. Carney, a Nashville native who moved to Birmingham to become executive chef at J. Alexander’s, decided to take his experience to the streets. Since every trip home was a reminder that Nashville had something Birmingham did not yet offer, choosing what to serve was easy.

“Hot chicken has been huge in Nashville for three decades, but now it’s becoming a world phenomenon,” Carney said. “So for like the last five years, I’ve been trying to open up a hot chicken restaurant down here.”

Carney made the decision to go with a food truck when his original plans didn’t work out.

“I was trying to open up a small little brick-and-mortar, and financially, I couldn’t get a brick-and-mortar fast enough,” Carney said. “So I decided to go with a truck.”

According to Carney, hot chicken offers a flavor that is unique from either Buffalo or spicy chicken. Available in four different levels of heat ranging from “Southern” (no heat) to “Stupid Hot,” the Eugene’s Hot Chicken experience is available in everything from breasts and wings to tenders and popcorn style. There’s even a “naked” option for customers who prefer the heat without the breading.

And Carney makes sure that the food that comes out of his truck is high quality.

“We make everything fresh on the truck; nothing’s frozen, nothing microwaved,” Carney said. “So even though it’s a food truck, and we’re serving fried chicken, we still try to bring some ‘chef-y’ elements to it to try to make it one of the best food trucks in Birmingham. And it’s still Southern comfort food.”

In addition to Off The Hook and Eugene’s Hot Chicken, he block party will also feature Bendy’s Cookies and Cream, Greg’s Hot Dogs and Pop’s Cool Spot.

All of the trucks will be on the scene at Trussville Downtown’s Block Party, which will take place on Saturday, August 13 from 5-8 p.m. To find them any other day, follow them on Facebook and Twitter. For more information, visit their websites at Ryouhooked.com and Eugeneshotchicken.com.