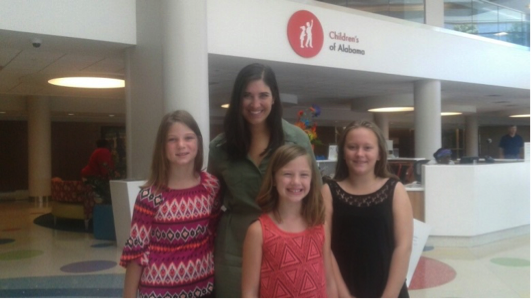 Kathleen is shown with two of her key partners, Hannah Kelly and Janie Steele, making the donation to Kelly Baker, Children's of Alabama Community Engagement Coordinator.

TRUSSVILLE — Another Trussville youth was caught in a positive act. Kathleen Bell, 9 of Trussville, began raising money in late 2014 for Children’s Hospital of Alabama after she saw a fund raising booth for the Children’s Miracle Network at a local department store. Bell began her project by selling loom bracelets for donations. By the time she had raised $50, she realized that the bracelets took too long to make for the usual donation of about a dollar so she went back to the drawing board. 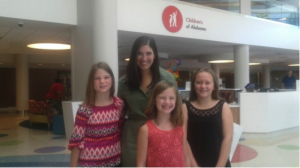 Kathleen is shown with two of her key partners, Hannah Kelly and Janie Steele, making the donation to Kelly Baker, Children’s of Alabama Community Engagement Coordinator.

When she came back from the drawing board, she had decided to make bookmarks with sport, love, faith, and, of course, Children’s Hospital themes. These she could mass-produce, and soon she had a number of friends on the job with her. She walked the neighborhoods around the Cahaba Project selling her bracelets, paintings and bookmarks in her spare time for about a year.

“Our neighbors were so nice that they sometimes paid for just a little bookmark made by a kid,” Bell said. “Trussville people are good people.”

By her 9th birthday, she had earned over $300 and the attention of a number of adults, including Peter Salemme of Habitat for Humanity in Tuscaloosa. Salemme donated a number of scrap-made birdhouses that Kathleen and her friends custom painted. She themed her birthday party around the cause, and she and 19 of her friends (escorted by her father) made the final push combing the neighborhood collecting donations for their crafts. In the end, she had raised well over $500.

If you who live in Trussville subdivisions outside of the Cahaba Project, have your pocket change ready– Kathleen and friends are already developing phase two of the effort.