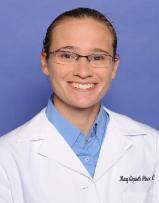 TRUSSVILLE — Dr. Mary Gilmer’s interest in medicine began on a school playground when she was 6-years-old. After a fall, a broken arm and a trip to the doctor, Gilmer started down a path that ultimately led her to medical school. Now, she’s a physician at Alabama Ortho Spine & Sports in Trussville.

“Dr. Savage, who is our senior partner here, was actually the one who set my arm,” Gilmer said.

In her senior year of high school, she was invited to complete her work-study at the office, where she worked through college and part of medical school. After performing her residency and fellowship in Houston, she returned in 2013 and began practicing alongside Dr. Perry Savage and the rest of the staff.

“It was very much like coming home,” she said.

Having grown up in Roebuck and Trussville, Gilmer also returned home in a more literal sense, and she now enjoys serving her community.

“A lot of it is the patients, in the sense that it’s a community feel,” Gilmer said. “I love the old neighborhoods in the city, those kinds of things.”

While she does practice general orthopedics, Gilmer chose to specialize is in foot and ankle care.

“It is a little bit of everything,” she explained, “so you treat people from the time they’re born — you know, with babies with clubbed feet — all the way up through the elderly.”

As a physician, Gilmer hopes to offer care to the community that was not previously available.

“There’s not really another foot specialist in Trussville,” Gilmer said.

While she noted that podiatrists “have a very big role in Trussville,” she wants to provide services that those offices might not be able to offer.

“It’s nice for me to be able to offer the next level up of care,” Gilmer said.

In addition, Gilmer and the rest of the staff at AOSS are focused on keeping up with the latest in medical care.

“We can take care of pretty much all of the orthopedic needs short of true, go-to-sleep surgery here,” Gilmer said. “We have an MRI, a CT, all those kinds of things here.”

But Gilmer’s impact on the community is not confined to the inside of the office. She and her husband, who spend their off-time doing everything from kayaking to trail running, coach a bike racing team for kids around the Birmingham area.

“It’s a composite team which is made up of kids from all over Jefferson County,” Gilmer said. “It’s a fairly new thing that’s getting more kids on bikes, keeping them more active, getting them used to racing.”

Both in and out of the office, Gilmer has dedicated herself to keeping the Trussville community up and moving. Combining her skills as a physician with her passion for the outdoors, she helps her fellow community members become and remain active. And while a childhood injury may not have been the defining factor of her life, perhaps it makes sense that it all started with a little girl playing outside.