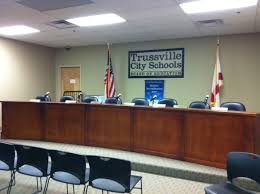 TRUSSVILLE – The Trussville City Schools Board of Education met Thursday morning to discuss updates to the Board Policy Manual, the 2017 budget and the start of a new school year.

During the work session preceding the meeting, the attention focused on the revised Board Policy Manual. After an estimated six drafts of the manual, it was approved as part of the consent agenda during the official meeting.

Multiple board members agreed that many other school systems don’t take the time and care to make the updates that TCS has made to the manual, and it was pointed out the board always makes updates following a legislative session, to ensure the manual is accurate and up-to-date in accordance with happenings in Montgomery.

“We have a policy unique to Trussville City Schools, as opposed to using someone else’s policy,” Board President Sid McNeal said.

The TCS code of conduct was also discussed during the meeting, as this year was the first time that teachers, principals and administrators alike came together to discuss discipline and procedures for TCS.

“It’s a procedure that matches our (board) policy,” Superintendent Dr. Pattie Neill said.

Board members were in agreement that the revised code of conduct has provided every person in TCS a common understanding of disciplinary actions.

During the budget hearing, which was the second budget hearing for the 2017 school year, Dr. Pattie Neill recommended the board approve the budget as a part of the consent agenda. It was announced that the board is expected to break even for the 2017 school year, after dipping into the education trust fund to rewire the light system at the baseball stadium, and to support costs associated with opening a new elementary school. The school system will be reimbursed for the school costs at the end of the upcoming school year, which will allow the board to pay the education trust fund back.

The next TCS Board of Education meeting will take place September 19 at 6 p.m. A work session will precede the meeting at 4:30 p.m.