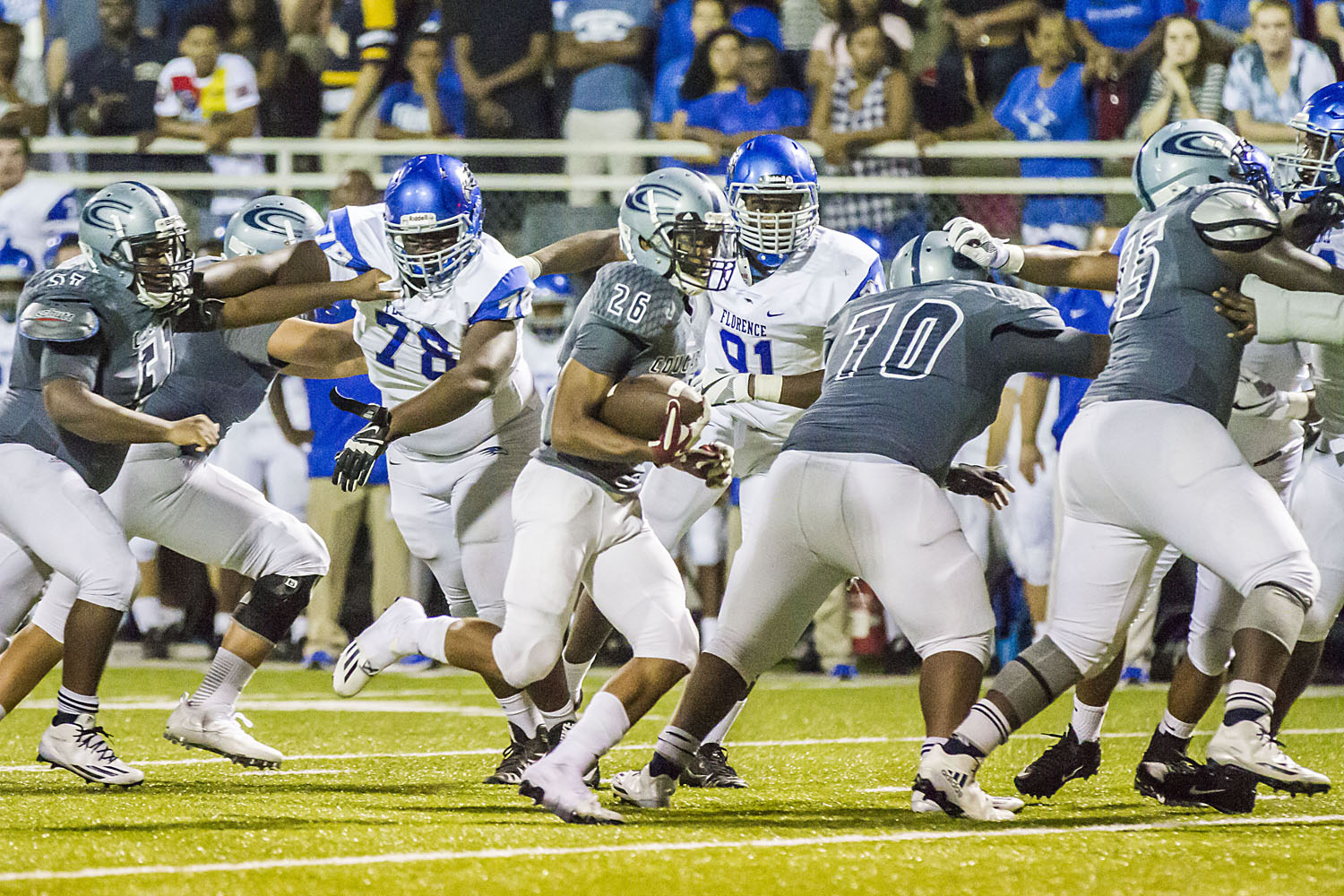 By John McWilliams
Special to The Tribune
CLAY – In a game where 101 combined points were scored, the defense made the biggest play.
Clay-Chalkville linebacker Derrick Bean picked off a pass near midfield with fewer than three minutes left to secure the 53-48 win over Florence on Friday at Clay-Chalkville. 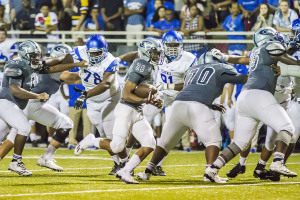 Florence came from 28 points down in the second half to take a 48-47 lead with 4:06 left, but Class 6A, No. 2-ranked Clay-Chalkville answered one minute later on a 31-yard run to reclaim the lead. The Falcons tried to respond, but an interception on the first play of the ensuing drive quelled any chance for a rally.
“It was great; we just have to communicate on the field,” Bean said. “We just had to remember why we’re doing this and communicate and get as one on the field.”
Clay-Chalkville has now scored 20 or more points in 78 consecutive games, a state record.
Florence quarterback Monte Turner finished with 311 passing yards and totaled five passing touchdowns on throws of 27, 17, 22, 25, 49 yards and one 25-yard rushing touchdown. Johnathan Coffee had scoring receptions of 27 and 49 yards, while Jakobi Byrd had scores of 17 and 22 yards. Quess Carroll added a 25-yard touchdown reception and running back Kameron Davis had a 5-yard score.
“It was a slow start,” Florence coach J.B. Wallace said. “… But, one thing I’m proud about our boys is how they came out here and went toe-to-toe with them. They didn’t quit. We talked about it at halftime and the decision was made at halftime that we were going to come out here and play and those guys did it. They’ve got a great team and great players, we’ve just got to get better and start faster and finish strong.”
Florence had no answer for Clay-Chalkville’s high-powered spread offense, which amassed 464 rushing and 245 passing yards. Clay-Chalkville quarterback Willie Miller had three touchdowns, while running back Quentin Young added four scores on runs of 1, 21, 64 and 31 yards.
Highly-touted receiver Nico Collins boasted 146 receiving yards and one touchdown. Roderick McCloud added a rushing and receiving touchdown.
“The offense is better than I thought we were,” Clay-Chalkville coach Jerry Hood said. “I thought Willie handled his first start very well and we caught the ball well. I was proud of our kicker for hitting his extra points and we’ve got to change some people on the kickoff team, but that’s what happens in the first game.”
Florence struck first on its opening drive with a 27-yard pass from Turner to Coffee for a 6-0 lead, but the advantage didn’t last long. Clay-Chalkville used a pair of passing touchdowns from 40- and 84-yards out to claim a 14-6 lead.
The Cougars continued their domination with an 80-yard touchdown run and a 6-yard touchdown pass to build a comfortable 27-6 halftime advantage.
Turner and Byrd connected for back-to-back touchdowns and Davis added a third Florence score to end the third quarter with Clay-Chalkville ahead 41-28.
Florence and Clay-Chalkville traded touchdowns midway through the fourth quarter and held a brief lead before the Cougars stopped the rally.
“It was just execution,” Miller said. “We worked hard in the summer. I was a little bit nervous, but after I threw my first pass I was OK.”