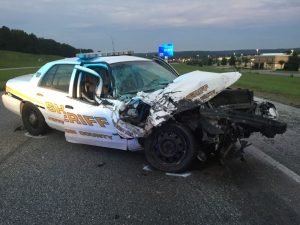 The accident occurred on I459 South near exit one. The deputy was traveling south responding to a call, when he lost control of his vehicle and struck the side of a flatbed truck, which was traveling alongside him.

The deputy suffered minor injuries and was transported to a local hospital. The driver of the truck was not injured.

The Bessemer Police Department is continuing to investigate.