“I am most appreciative and very honored that Mayor Melton has decided to support me,” Choat said. “I really appreciate his commitment to support me in the upcoming runoff.”

Melton said his primary reasoning behind supporting Choat is he believes Choat’s heart is in the right place, and he will take good care of the people of Trussville.

Melton said Choat’s eight years of experience on the Trussville City Council serving in different capacities such as liaison to the Trussville Public Library and Parks and Recreation Department show his passion and commitment to serving the city.

“He’s tried his best between his work and trying to serve the city,” Melton said. “I think he’s done as well as anybody could to try to learn how a city actually runs and operates.” 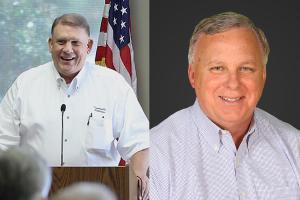 Choat said he has tried to build a great relationship with Melton over the last eight years, and thinks Melton has done a great job for the city of Trussville.

“What he’s done is part of my vision for Trussville moving forward,” Choat said.

Choat’s experience serving on the Trussville Downtown Redevelopment Authority will give him a greater insight into what the city is trying to do with the downtown area, according to Melton.

“He has a step up in the knowledge and experience being on that board during the time that it started out,” Melton said. “It will take a strong mayor to make sure they don’t lose sight of what they need to be doing.”

In addition to Choat’s experience serving on the council, Melton said he’s also been eager to learn as much as he can about other facets of local government.

“I’ve tried to make him a part of the decision making process, along with the rest of them, and offered to come in and act as a mentor if they wanted to learn,” Melton said.

However, just like with any new position, Melton said there will be a learning curve for whichever candidate is elected.

“It’s not just going out and shaking hands and patting people on the back and attending all these civic organizations, you have to take care of the city and be forward thinking,” Melton said. “If elected he (Choat) will get the chance to sit on this side of the table and deal with five independent thinkers and keep them corralled. I believe he can.”

Regardless of whichever candidate wins, Melton said he will be around to help. Melton remembered when he came into office in 1996, asking the previous mayor for help, but being told he was on his own.

“I won’t do that to either one of them,” Melton said.

Melton said the things that are most important for either candidate to learn quickly should he be elected is the day to day operations of the city, and how to stop what they’re doing to address a problem quickly. He said although the management of personnel is part of the job, as is hiring and firing, he hopes that Trussville continues to put its people first.

“I hope the mayor won’t lose that down home type of feeling,” Melton said.