CLAY — Volleyball season gets underway this week, and Clay-Chalkville High School is looking to build upon the success of head coach Natasha Brown’s first two seasons.

The Cougars reached the round of 16 in last fall’s playoff run, and the objective for 2016 is to get one step further.

“The goal this season is to compete at the (Birmingham) CrossPlex,” Brown said in the summer. “This group, we definitely have to commit and work harder, which is not an issue.” 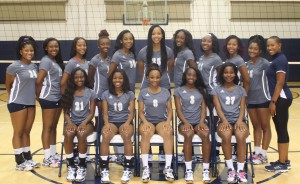 Brown’s passionate and disciplined coaching style aided by a large core of seniors – like Kardasia Hitchcock, who is now at Stony Brook University – resulted in great success for the program.

If that success is to be duplicated, the Cougars will have to do it a different way.

“This is a younger group,” Brown said. “But the results can be the same. Each year I’ve been at Clay, we’ve progressed.”

Brown did receive some good news in the experience department, as Raven Omar will indeed play volleyball this fall. It was unclear throughout the summer if she would play the sport along with basketball this year, but Omar recently committed to Samford University to play basketball and will play both sports at Clay-Chalkville in her final year.

“I am overwhelmed,” Brown said. “It’s a blessing and it’ll definitely be good for the season.

“More than anything, it’ll be good for the defensive side of our game. She has a high volleyball IQ and she’s very quick and can essentially anticipate where the ball is going.”

As the Cougars’ libero, Omar can substitute for any player on the back row at any time.

La’Cherrie Harris and Mekaila Hill are two middle blockers that Brown will rely heavily on, as well as Jaleria Thomason, who moves to setter after spending time as a defensive specialist.

Brown said the Cougars’ strength is the middle hitters on the roster, while there is still work to be done when it comes to staying focused and “regrouping” after tough points.

The lights come on in the Clay-Chalkville High School gymnasium on Thursday, as Pinson Valley pays a visit. The junior varsity match begins at 5 p.m., with the varsity match to follow immediately afterward.

“They have a new coach (in Destiny Frazier) so I don’t really know what to expect,” Brown said. “But I believe they’ll come in to play hard.”

Both teams must be ready right out of the gates, as the match is a Class 6A, Area 12 contest.

Elsewhere, Hewitt-Trussville opens its season at Springville on Saturday. The JVs meet at 5 with the varsities squaring off at 6. The freshmen opened at home in a tri-match Monday at 4:30 with Vestavia Hills and Mountain Brook. The varsity’s home opener was Tuesday against Hueytown. The JV played at 5 with the varsity to follow.