BESSEMER — Billed as a battle of strengths, the Clay-Chalkville Cougars and Bessemer City Purple Tigers did not disappoint. A Class 6A top ten tilt, the back-and-forth affair had the drama of a late-season playoff game, and the experience of the top-ranked Clay-Chalkville Cougars(2-0) showed as they escaped with a 33-30 win over the No. 9-ranked Tigers (1-1).

With 2:42 remaining in the game, Bessemer City took the lead 30-27 with a touchdown pass from quarterback Jason Foster to Delveccio Johnson, but the Cougars would get a chance. The record-setting offense took the ball, but two plays later running back Tony Gurley was stood up by the Tigers and eventually stripped of the ball. 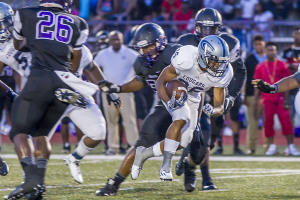 With only two timeouts and barely more than two minutes left in the game, the chances of the Cougars keeping their 25-game regular season win streak alive seemed dim.

That’s when the football gods smiled down on Clay-Chalkville.

A quick 2-yard loss on first down forced one of those timeout calls. Following the timeout, however, Bessemer City ran a quarterback roll out pass and the Cougars defense ran Foster out of bounds for a 12-yard loss. Another short run and timeout call gave Clay-Chalkville a chance to get the ball back with a little more than 90 seconds to play. A fake punt — the fourth fake punt of the night from Bessemer City — saw the snap fly over the punters head, but still end up a completed pass. The completion fell short of the first down.

Cougar sophomore quarterback Willie Miller then pulled out his best Tyrell Pigrome impression and ran for a 21-yard gain. He then hit Cameron Ware on a screen pass, and suddenly the Cougars were set up inside the Tigers’ 10-yard-line.

Three penalties — two against Clay-Chalkville and one against Bessemer City — set up the Cougars first-and-goal at the 15-yard-line.

With all eyes on the Cougars’ big wide out Nico Collins, Miller took the snap and tucked the ball. He scrambled to his left and found the corner of the defense before lunging  at the pylon in the front corner of the end zone for the go-ahead touchdown run with 30.8 seconds left in the game.

Clay-Chalkville head coach Jerry Hood was relieved after the game, saying Miller made the play happen.

“Willie improvised, we didn’t block the defensive end — the tackle whiffed, but he runs in the endzone,” Hood said.

Despite the game ending with 66 total points, both defenses were stout throughout the night. Clay-Chalkville held the Tigers to 215 total yards on offense with 49 rushing yards. Bessemer City was the fortunate recipient of several busted plays that turned into first downs, as well as three drive-extending penalties.

The Tigers’ highly-touted defense definitely stifled Clay-Chalkville at times, but the Cougars managed to put together several key drives and finished with 351 total yards, 206 passing and 145 rushing.

Special teams was one key area in the game, Clay-Chalkville missed a pair of field goal attempts, but also blocked two punts. One of those blocked punts resulted in a 24-yard touchdown run from Quentin Young. Young finished with 78 yards on the ground and a pair of scores. Miller added two touchdowns on the ground and a very important 37-yard touchdown strike to Collins with just over a minute to play in the first half.

Hood was proud of his team’s ability to grind out the win, but thought the energy level was lacking at times.

“We’re a young team, those things are going to happen.”

Clay-Chalkville opens region play at home next week against Walker, who fell to Hueytown 24-16.