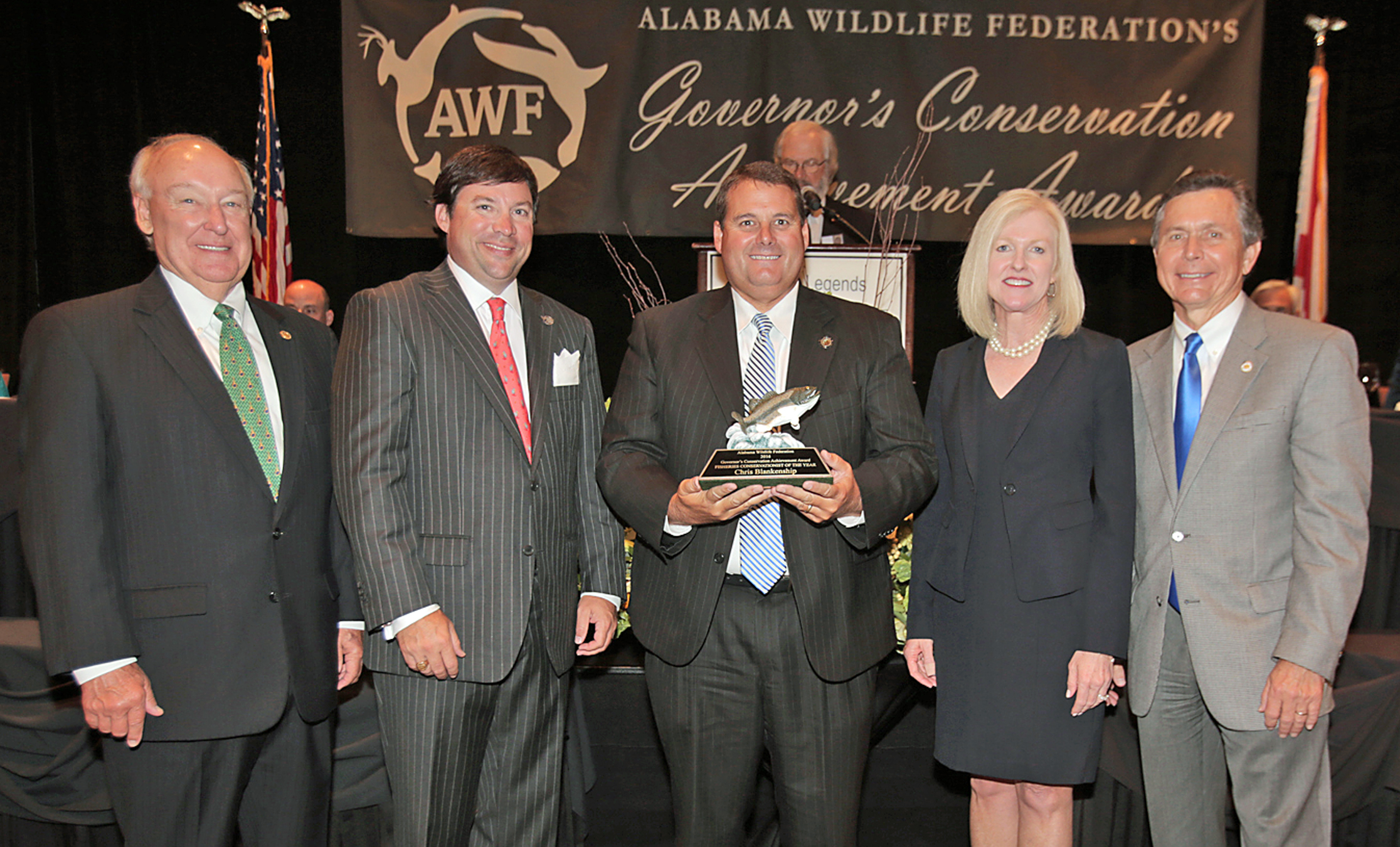 While reviewing the Alabama Wildlife Federation (AWF) annual Governor’s Conservation Achievement Awards late last year, the AWF Board and Tim Gothard, AWF’s Executive Director, realized there was a gap in the awards coverage.

Despite having a dozen awards, from Conservationist of the Year to Air Conservationist, not one of those awards was specific to an area near and dear to the hearts of almost all Alabamians who love the outdoors – fisheries.

Hence, the inaugural AWF Fisheries Conservationist of the Year award was presented last week to Chris Blankenship, Director of the Marine Resources Division of the Alabama Department of Conservation and Natural Resources, during the annual awards banquet in Prattville.

“We created the fisheries category during what we call the off-season,” Gothard said. “We realized that with all of our categories, there was really no category to focus on the fisheries conservation work that goes on in the state. We could have folded it into the wildlife, but fisheries is really not wildlife in the official terminology.

“We felt like the whole fisheries arena, both fresh and saltwater, and all that good work done in that field deserved a category unto itself.”

“We look at any contribution to fisheries in the state, whether it’s an agency person, like Chris, or a professor working at a university, or it could be a private organization like the CCA (Coastal Conservation Association) or homeowners or boat owners group who are promoting fisheries conservation in Alabama,” he said. “Because of his efforts to ensure access to Alabama’s red snapper fishery, we felt like Chris was deserving of the initial fisheries award.”

Blankenship has been Marine Resources Director since 2011. Not only has theMarine Resources Division significantly increased marine habitat during his tenure, Blankenship has made numerous trips to Washington, D.C., to address Congress on the red snapper fishery and what it means to Alabama’s economy and recreational and commercial fishing opportunities.

“I’m excited to receive the AWF Fisheries Conservationist of the Year award,” Blankenship said. “But mostly, I think it’s validation of the good work our staff does that is really making a difference for marine resources in coastal Alabama. I have long enjoyed attending the AWF banquet each year, and I’m so proud of the work many people do to enhance the outdoors in Alabama. I’m honored to receive one of those coveted statues.

“One of the things I’m proud of is the artificial reef work. We already had a great program, but I think we’re taking it to the next level with our offshore and inshore programs. The establishment of the new reef area between 6 and 9 miles will be a great addition to the program and will be a great legacy for people who work for Marine Resources.”

Blankenship said one thing he’s most proud of is the State of Alabama’s lead role in working with the federal government and Congress to try to remedy the mismanagement of red snapper.

“It’s a heavy lift to try to do anything in Congress or make changes in the federal government policies, but I think we’re making good strides,” he said. “We’ve gone about it in a very logical and thoughtful way, and I hope we’re going to have some success in the very near future. I’m very proud of what we’ve accomplished on red snapper.” 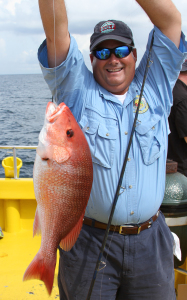 Gunter Guy Jr. Blankenship was cited for his work to improve red snapper management in the Gulf of Mexico.

Alabama Senator Richard Shelby was presented the Legislative Conservationist of the Year for his work on red snapper, and he inserted language in the Congressional Omnibus Appropriations bill that extended Alabama’s coastal waters boundary from 3 miles to 9 miles for fisheries management.

Dr. David Thrasher of Montgomery was named AWF Conservationist of the Year. Thrasher, a pulmonary and critical care physician, also holds a bachelor and a master’s degree in wildlife and fisheries biology from Auburn University. Thrasher, past AWF president, and current vice president of the Alabama Conservation and Natural Resources Foundation, makes his property in Macon County available to Auburn students for research projects.

The Judicial Conservationist of the Year award went to Justice Jim Main of Montgomery for his work to resolve issues regarding oil and gas royalties and the prevention of proposed closings of the Blakeley and Saint Stephens parks. Main, a supporter of the Forever Wild program, has property in Bullock County that is designated as a Treasure Forest.

Conservation Communicator of the Year James “Big Daddy” Lawler of Camden has shared his love for the outdoors through his radio program, “The Gettin’ Outdoors Radio Network.” Lawler has a special love for his family’s Grampian Hills property outside Camden and the abundant outdoors experiences, including fishing, hunting, birding, hiking and biking, in Alabama’s wildlife-rich Black Belt.

Conservation Educator of the Year Doyle Keasel of Auburn has been an educator for 35 years, the last 13 of which have been in a partnership position with the AWF and Alabama Cooperative Extension System. That partnership has supported the Alabama Outdoor Classroom Program, Discovering Our Heritage Program and Conservation Education Teacher Workshops. More than 4,500 educators have received natural resources-based training through Doyle’s workshops.

Water Conservationist of the Year Dr. Pat O’Neil of Tuscaloosa, Deputy Director of the Geological Survey of Alabama, has made significant discoveries and advances in identifying and protecting Alabama’s water resources. O’Neil has also pioneered work in the aquatic organisms in the Coosa and Tallapoosa river systems, Mobile-Tensaw Delta and coastal rivers and streams. O’Neil co-authored the comprehensive book “Fishes of Alabama and the Mobile Basin.”

Forest Conservationist of the Year Jimmy Bullock is Senior Vice President of Forest Sustainability at Resource Management Services in Birmingham. Bullock is responsible for sustainable forest policies and is at the forefront of the restoration of longleaf pine in Alabama. He is one of the leaders of The Coastal Headwaters Longleaf Conservation and Restoration Initiative.

Luis “Wicho” Hechavarria Jr. of Orrville received the Wildlife Conservationist of the Year award for his wildlife conservation efforts on nine tracts of land in Dallas County, where he intensively manages for white-tailed deer, wild turkeys, bobwhite quail and waterfowl.

Greg Gilliland of Munford, recipient of the Conservation Enforcement Officer of the Year award, has served as an officer with the Alabama Wildlife and Freshwater Fisheries Division in Talladega County since 2003. In addition to enforcing the wildlife and fisheries laws, Gilliland contributes to community outreach programs that involve youth, as well as churches, schools and concerned landowners.

Hunter Safety Instructor of the Year Mike O’Neal has been teaching young and inexperienced hunters for more than 20 years. O’Neal has conducted more than 50 hunter education classes that have led to the certification of thousands of students since 1993.

Air Conservationist of the Year award went to the Georgia-Pacific Naheola Plant in Choctaw County. The integrated pulp and paper mill has implemented eco-friendly initiatives in the plant that have saved more than three million kilowatts of energy, reduced sulphur dioxide emissions by 20,000 pounds and nitrogen oxide emissions by 14,000 pounds annually.

Land Conservationist of the Year Blythe Cotton Company is a family farming operation in Town Creek that grows cotton, corn, wheat and soybeans on 3,500 acres. The Blythe family incorporated a no-till conservation method to reduce soil erosion from 15 tons to one ton annually.