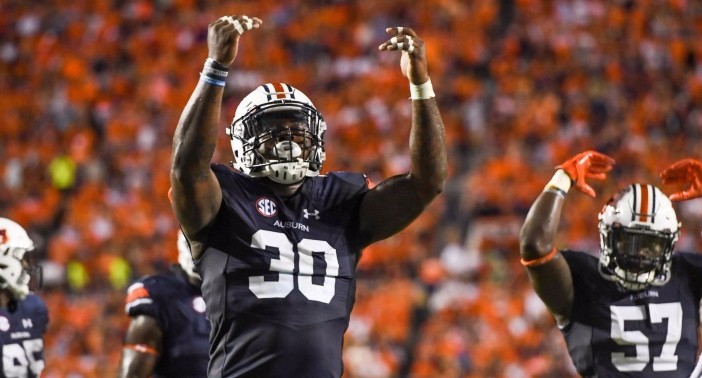 Tre' Williams and the Auburn defense will be looking for more after the season-opener. Photo via AuburnTigers.com

AUBURN, Ala. — Tre’ Williams had started a few games, but Deshaun Davis and Darrell Williams were a mystery to most fans.

Not so much anymore. 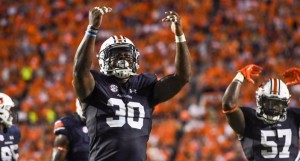 Tre’ Williams and the Auburn defense will be looking for more after the season-opener.
Photo via AuburnTigers.com

The linebacker trio of Williams, Williams and Davis were part of a feel-good defensive performance in Auburn’s season-opener against Clemson, and they’ll be looking for more when the Tigers play Arkansas State at 6:30 p.m. Saturday in Jordan-Hare Stadium.

Tre’ Williams, recognized as one of the leaders of the defense, could have dropped an I-told-you-so line about his linebacker teammates.

Well, maybe he did.

“Like I?told y’all before,” he said, the linebackers improved over the summer and in August.

“People weren’t really looking forward to those guys because they didn’t really know what they are about, but they believed in themselves and we believed in them as well and they came out to play ball,” Williams said.

“I thought Deshaun and Darrell and Tre’ did an outstanding job,” Steele said. “They’re instinctive guys and I think that showed up. And they’re very good students of the game, that’s what really helps them. They study the game. They just don’t go out there and play.”

Williams said new linebacker coach Travis Williams has brought the aggressive style that made him a fan favorite when he played for the Tigers to the field again, now coaching a new batch of Auburn linebackers.

“T-Will is a great coach and ever since the spring started he forced us to be physical and mental. That is what we came out to do.”

Williams added, “T-Will is very passionate because he played here. He understands and he also has a linebacker mind. Listening to him gives us confidence because he really knows what he is talking about.”

Tre’ Williams said the linebackers have improved, but, “yes, sir, we still have a lot of work to do.”

“We cannot be complacent; we cannot be happy with anything. Even though we did play pretty well we still have a lot of stuff to build on. Every day at practice we are going to work harder and harder to get to that goal.

“Our linebackers this year are closer. We did a lot in the offseason together that really brought us to together. When we got out there on the field didn’t much change. We all knew our stuff and just played together.”