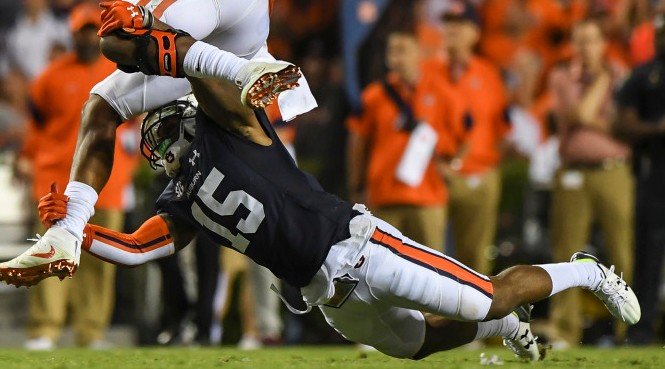 AUBURN, Ala. — It’s been a year and a couple of days since Josh Holsey had surgery to fix an ACL tear.

Make that, his second ACL tear.

The Auburn defensive back acknowledged his comeback from his last knee injury Friday in a tweet, the same day he was tweeted about on the Tigers’ game program in an excited pose.

He’s surely excited to be playing again after another year away from action, has an interception in the first two games this seson to show for it, and will be looking to contribute more when Auburn plays host to Texas A&M at 6 p.m. Saturday.

Today makes a Year and 1 day since my second ACL surgery . what a difference a year make .

This will be the fifth time Auburn has played Texas A&M since the Aggies joined the league in 2012. They’ve been a hit-or-miss proposition for the fifth-year senior. He suffered his first ACL tear in the week leading up to playing the Aggies in 2013 and missed last year’s game with a knee injury as well.

Holsey started in Auburn’s second game this year, a 51-14 win over Arkansas State last week. It was his first start since tearing his ACL in the second game last season.

“All my hard work is truly paying off right now,” he said. “I worked by tail off each and every day and once I told myself I was going to come back and play. Then I was determined to come back and produce. Just for anybody to see how well I’m doing is it’s because of my motivation. I’m still here because I want to motivate somebody else that might have had a knee that from somebody with two knee injuries, it shouldn’t stop you. I’m going to just keep playing, have fun and if you’re out there, you might as well make a few plays while you’re out there. It’s all in the love of the game.”

Holsey doesn’t have to look far to help someone who is battling back from a similar knee injury. Jeremiah Dinson tore up his knee, and a shoulder to boot, last season against Texas A&M. He’s trying to get ready to play again.

Who did he go to for advice? The expert, of course.

“That’s common now with anybody that gets one of those ACLs for me to be the first guy to come to because I’ve been through it a few times,” Holsey said. “I sat down with him a lot when he first got hurt and try to make sure I could keep him mind in the right places. I didn’t want to fade away like I did my first time. I talk to him a lot. I still talk to him even though he’s doing a lot better.”

Coach Gus Malzahn said this week he is “hoping” Dinson can return this season. He’s dressed out for both games. In the meantime, Holsey, forced to be an expert on knee injuries, said he offered this advice to Dinson:

“It’s a new journey. It’s going to be a tough road. If I can make it, then you can, too. I was just trying to get his mind prepared for a new journey, new role and get ready to be back out there ready to play. I told him to make sure you take rehab serious because I know rehab gets redundant when you’re doing the same thing over and over again but you have to know it’ll pay off one day.”

Charles Goldberg is a Senior Writer at AuburnTigers.com.