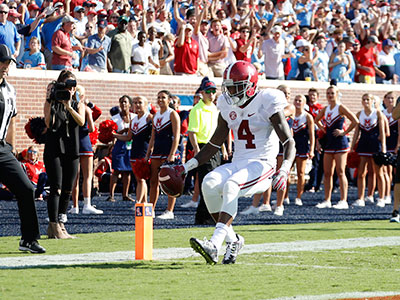 OXFORD, Miss. – The University of Alabama’s top-ranked football team erased a 21-point second-quarter deficit, tying the largest deficit overcome in the program’s history by scoring three non-offensive touchdowns to defeat the 19th-ranked Ole Miss Rebels (1-2 overall; 0-1 in the Southeastern Conference), 48-43, before a stadium-record crowd of 66,176 (capacity: 64,038) Saturday afternoon at Vaught-Hemingway Stadium on the campus of the University of Mississippi. 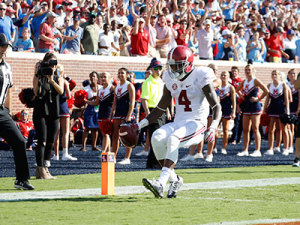 The largest crowd ever to attend a college football game in the state of Mississippi witnessed a wild one as the Crimson Tide (3-0 overall; 1-0 in the SEC) snapped a two-game losing streak to the Rebels, outscoring Ole Miss by a 45-13 margin after trailing, 24-3, with less than three minutes remaining in the second period. That comeback tied the Alabama football record for the largest deficit overcome in a game, another 21-point lead the the Rebels had over the Tide in a memorable 62-27 Alabama win in 1989. The Tide use a punt return touchdown by Eddie Jackson, a fumble return touchdown by Da’Ron Payne and an interception return by Jonathan Allen to punctuate the victory.

Along the way, Alabama freshman quarterback Jalen Hurts became the first Tide signalcaller to rush for more than 100 yards since Tyler Watts in 2001 (110 vs. Ole Miss on October 13, 2001). Hurts accounted for 146 yards on the ground and threw for 158 more to accumulate 304 yards of total offense on the day.

Tide wide receiver Calvin Ridley‘s 81 yards on eight catches led all Tide receivers, while receiver Gehrig Dieter had two catches for 47 yards. Running back Damien Harris rushed for a career-best 144 yards and a touchdown on 16 carries to lead the Tide running backs on the ground. Harris and Hurts gave Alabama two 100-yard rushers in the same game for the 18th time in Crimson Tide history and the first time a quarterback has figured into that achievement since Jeff Rutledge and running back Johnny Davis did so against Auburn in 1977.

Overall, the Tide gained 492 yards (334 passing and 158 rushing), picked up 22 first downs, and averaged 6.2 yards per play. Ole Miss totaled 239 yards (216 passing and 23 rushing), along with converting 12 first downs and averaging 4.0 yards per play. Ole Miss outgained Alabama, 572 to 492, in total offense. The Rebels’s Chad Kelly passed for a career-high 421 yards and three touchdowns. The Rebels rushed for 106 yards and one touchdown on 32 attempts, an average of 3.3 yards per rush.

Linebacker Reuben Foster recorded a team-best 12 total tackles, including four solos. As a unit, the Tide defense had two quarterback sacks, four tackles for loss, intercepted one pass, broke up six passes, forced one fumble and was credited with two quarterback hurries.

Tide punter JK Scott averaged 38.8 yards on five punts, placing two inside the Ole Miss 20 with two traveling more than 50 yards with a long of 63. Placekicker Adam Griffith connected on two of three field goal attempts, connecting from 32 and 30 yards and missing from 47.

Alabama continues its season next Saturday, September 24, by hosting Kent State (1-2 overall; 1-1 in the Mid-American Conference) which defeated Monmouth on Saturday, 27-7. Kickoff is scheduled for 11 a.m. Central Time at Bryant-Dennny Stadium and the game will be televised by The SEC Network.