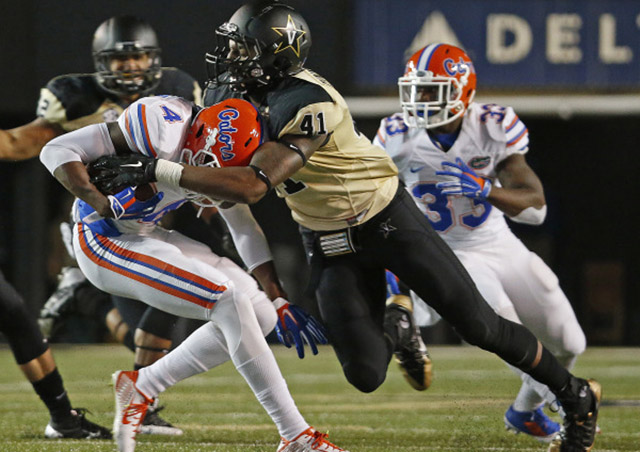 Vanderbilt linebacker Zac Cunningham from Pinson Valley is second in the SEC in tackles after two weeks of play.

Cunningham made 12 tackles in the opener against South Carolina and followed with 10 against Middle Tennessee. His 22 stops trail Jordan Jones of Kentucky’s 28 tackles.

The 6-foot-4, 230-pound junior will lead the Commodores against Georgia Tech on Saturday at 11:30 a.m. on the ACC Network, which airs on CW 21 in Birmingham.

Interesting stat concerning Bailey McElwain, the Hewitt-Trussville standout in his freshman season as Vanderbilt fullback. Teammate Ralph Webb leads the SEC in rushing. When Webb runs behind McElwain, he has 17 carries for 171 yards, 10 yards a carry. Without McElwain, he has rushed 12 times for 40 yards, about 3.3 yards per carry.

Cincinnati quarterback Hayden Moore of Clay-Chalkville will lead the Cougars against Houston Thursday night in a game televised on ESPN. Last week, Moore accounted for five touchdowns – three passing and two running – in the Bearcats’ win at Purdue. Moore completed 19 of 32 passes for 250 yards and ran eight times for 58 yards.