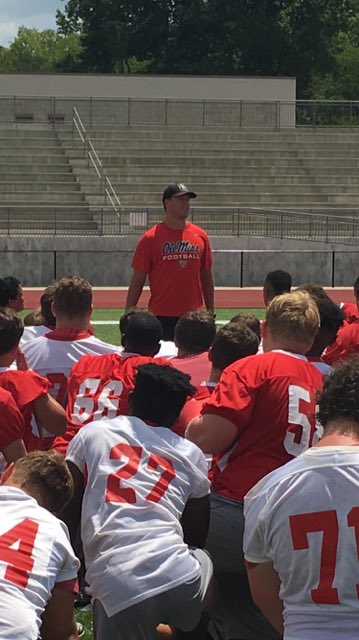 Former Hewitt-Trussville standout John Youngblood talks to the Huskies after a practice last week. Youngblood, who now plays for Ole Miss, was named the 27th recipient of the Chucky Mullins Courage Award and will wear Mullins’ No. 38 jersey in 2016. Youngblood graduated from Ole Miss in December of 2015. Photo courtesy Hewitt-Trussville athletics.

When John Youngblood scooped up Alabama quarterback Jalen Hurts’ fumble, his first thought was not of scoring a touchdown against the team from his home state. The Ole Miss senior linebacker from Trussville was thinking of someone else.

“The first thing I thought of when I grabbed that ball was my father. As soon as I ran off to the sidelines I pointed up to my family; my uncle and my aunt all the way from Raleigh, North Carolina, they came to see this game. I can’t wait to go visit with them after this.”

The 44-yard touchdown return of the fumble was Youngblood’s first career touchdown.

“I told somebody, I was running like the Devil was chasing me. … This has been the second most emotional week of my life, after losing my dad. It was really tough getting prepared for this game. It is actually a dream come true to be able to play against my home team and a team I grew up watching. To be able to play as many snaps as I did, it is just a dream come true for me.”

“We came out and played a very good team. Hats off to Alabama, they are a very well coached team. I thought we did a lot of good things offensively and defensively, but we just need to finish ball games.”

Youngblood now has eight tackles this season, one for a loss, and the fumble recovery. He was awarded the Chucky Mullins Award in April, wearing the late Rebel’s player jersey No. 38. The award, sponsored by Phi Beta Sigma fraternity, honors the late Mullins, who had his Ole Miss career come to an end during the 1989 Homecoming game against Vanderbilt when he was paralyzed after making a tackle. After returning to his studies at Ole Miss, Mullins passed away May 6, 1991.

Youngblood was a game captain for the Alabama game. He explained how Alabama could rally against a worn-down Rebels team.

“Well, you know, there are some big suckers you are lining up against,” Youngblood said. “Kind of being shorthanded, like we are, you go into a game not knowing how many snaps you’re going to have to play. You obviously know it’s going to be a lot, but you don’t know how many. Just the hits you take play after play, they really add up once you get to the fourth quarter. The fourth quarter in the SEC is just as real as you think it is.”

At Hewitt-Trussville, Youngblood was selected to The Birmingham News’ 2011 All-Northeast Zone football team, as he posted 131 tackles, 15.0 TFLs, 6.0 QB sacks and two forced fumbles as a senior. He helped lead the team to an 8-3 record as a senior. He was coached in high school by Hal Riddle.

He graduated from Ole Miss in December 2015 with a bachelor’s degree in marketing and corporate relations. He also participated in mission trips to Panama in 2013 and Haiti in 2014 and 2015 and holds a 3.17 GPA.

He and the Rebels face Georgia on Saturday at 11 a.m. on ESPN.

*Maryland freshman quarterback Tyrrell Pigrome of Clay-Chalkville replaced starter Perry Hills and raced 24 yards for the game-winning score on his only play of the game in a 30-24 double-overtime win for the Terrapins over UCF on Saturday night.

This Saturday’s TV games of note: