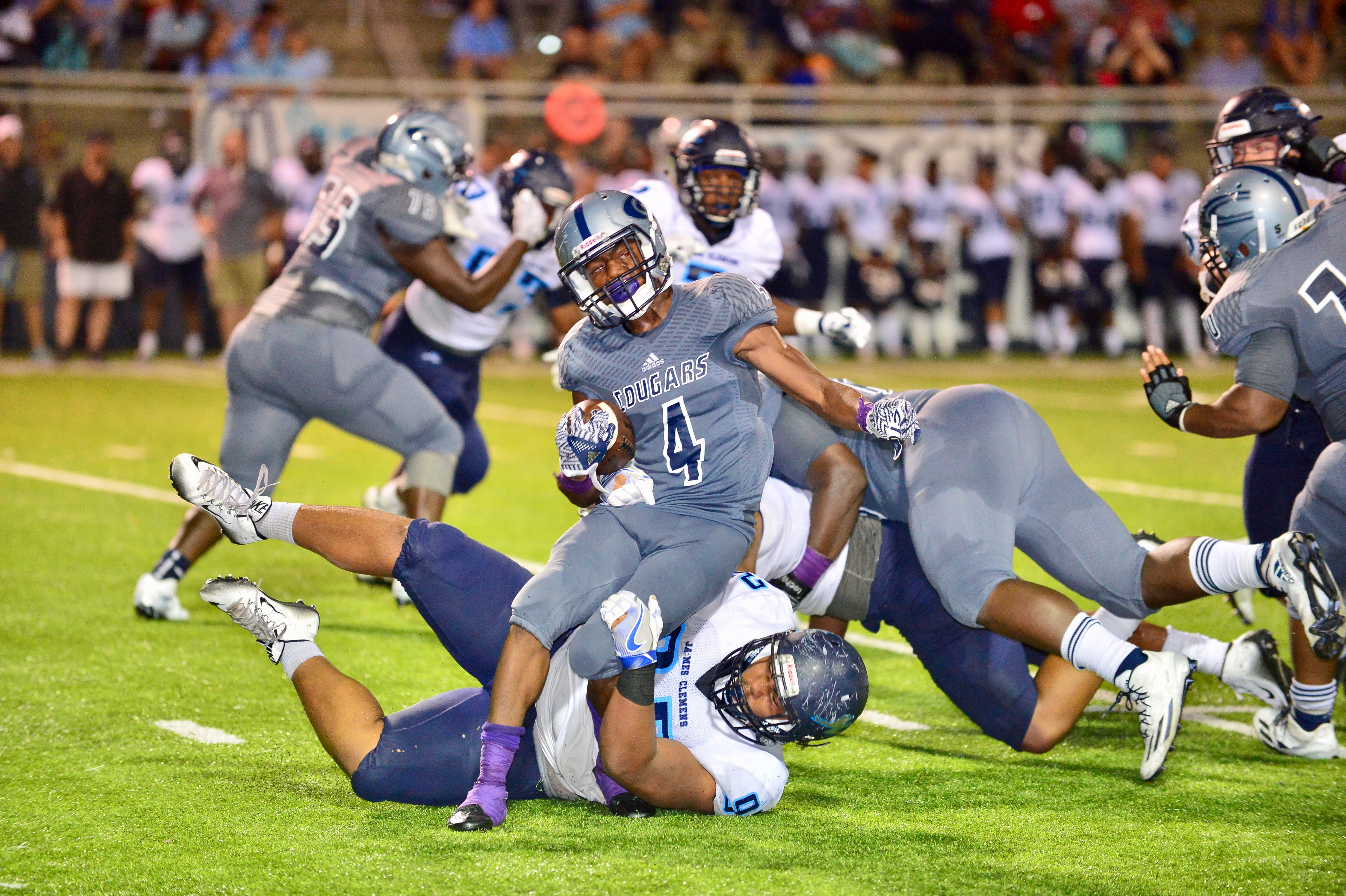 The Cougars fell to James Clemens 28-6. Photo by James Nicholas

CLAY – College recruiters were there, like Alabama’s Mario Cristobal and Karl Dunbar and Georgia’s James Coley. Recruiting gurus were there, too.

Unfortunately for Clay-Chalkville, Kyriq McDonald was there too. And he was playing.

McDonald was a human highlight reel, scoring touchdowns on a kickoff return, an interception return and on offense as a wildcat quarterback as Class 7A No. 9 James Clemens (3-2) knocked off Clay-Chalkville (4-2), ranked No. 6 in Class 6A, 28-6 at Cougar Stadium on Friday.

“When they put Kyriq at quarterback, he’s a problem,” said Clay-Chalkville coach Jerry Hood. “But they’ve got a good football team. They’ve got a championship-level defense. We had a hard time moving the ball. Turned the ball over, and we you do that you’re going to lose to a team like that.”

McDonald’s impact was felt early. Clay chose to kick the ball out of bounds on the opening kickoff, but Jets coach Wade Waldrop, instead of taking the ball on the 35, requested a re-kick. This time, McDonald hauled it in on his 19 and zipped 81 yards for a touchdown. It was 7-0, Jets, with just 11 seconds elapsed.

The teams traded three-and-outs. Clay, starting on its 25, went to the air. But sophomore quarterback Willie Miller telegraphed his pass to Rod McCloud and McDonald, an Alabama commitment, snapped it in at the 25, trotted into the end zone and James Clemens had a 14-0 lead in the first six minutes of the game.

“To be honest with you, we knew there’d be some games where we would have some growing pains at quarterback,” Hood said. “I think he threw two interceptions, and they dropped one. He’ll learn from that and he’ll come back.”

Down two touchdowns, the Cougars didn’t quit. The defense allowed just one first-half first down and the offense capitalized on a fumbled punt by Immanuel Wilder. Corey Lee pounced on the ball at the Jets 15.

Miller had one pass tipped away, a second pass play netted just 4 yards and a third pass was incomplete. So Drennon Mayhew hammered home a 28-yard field goal to cut the margin to 14-3 on the final play of the first quarter.

Clay’s defense was dominant in the second quarter. The Jets ran just eight plays, all runs. The Cougars had a tough time, too, but managed a drive from their 45 to the Jets’ 23, where Miller was stopped a yard short on a scramble on fourth down.

The Cougars forced a short punt, and Miller took his team from the Clay 46 to the Jets 13, where Mayhew knocked home a 30-yarder to cut the lead to 14-6 with 1:11 before half.

The Jets took the kick and ran out the clock. 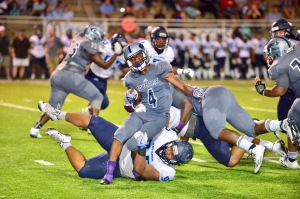 The Cougars fell to James Clemens 28-6.
Photo by James Nicholas

The Cougars had reason for optimism, getting the ball to start the second half.

McCloud returned the kick and was hit late late, setting the Cougars up at their 29. Miller hit Nico Collins and McCloud for nice gains, and Nic Jones burst 21 yards as the Cougars moved to James Clemens’ 23. But Miller missed his target and Monty Rice picked it off at the Jets’ 18, and raced all the way to the Clay 29 before he could be corralled.

The Jets decided to get cute and throw a rare pass, but JaMarlin Sewell picked it off in the end zone for the Cougars.

Clay started a drive, aided by a roughing the kicker call on Clemens, but a bad shotgun snap – one of two for the Cougars on the night – killed the drive. Again the Jets couldn’t move the ball on the ground, and actually threw a couple of short passes but were forced to punt, Clay was stymied again, and Mayhew punted 43 yards to the Jets 35.

Belt managed a 12-yard run on third-and-12 for the Jets’ second first down of the game and on the first play of the fourth quarter, McDonald entered the game and took a direct snap in a wildcat formation and sped 50 yards for a touchdown. The extra point made it 21-6 with 11:48 remaining.

The Cougars, hampered by a holding call, couldn’t move, and punted away. The Jets then kept it on the ground, with Belt pounding away at the Cougars’ defense. He carried the ball nine straight times, then Austin McGhee bust to a 15-yard TD with 6:05 remaining. The extra point by Matthew Randel made it 28-6.

The Cougars’ next drive moved to the Jets’ 38, but another poor snap left the Cougars punting again. Mayhew drilled a 59-yard punt and the Clay defense forced a punt. But Collins, trying to make a move on a defender, lost the ball and James Clemens recovered at the Cougars’ 27 with 2:09 to play. The Cougars topped them on downs, and Curtis Blakely had a 22-yard scamper, but the clock ran out on the drive for a consolation score.

“We’ve got to have great effort every play offensively. Defensively, I thought they played pretty solid for as long as they could. They were just on the field too much,” Hood said.

A crucial trip to region for Gardendale is up next for the Cougars.