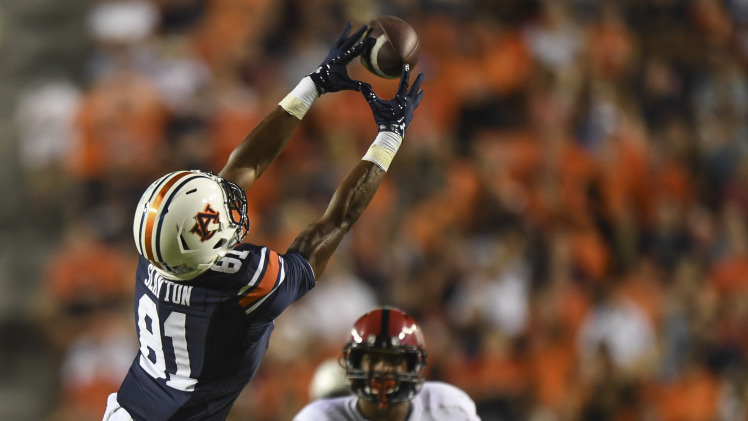 Auburn receivers are ready for LSU

AUBURN, Ala. — Darius Slayton said he liked the way Sean White handled himself when John Franklin III took over at quarterback in the fourth quarter last week.

“He didn’t get down. He didn’t mope or anything. He was right on the sidelines cheering John on,” Slayton said. 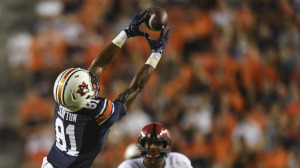 The Auburn receiver, plus White and Franklin, and the whole Auburn offense, for that matter, will be looking to finish the job when the Tigers play LSU at 5 p.m. Saturday in Jordan-Hare Stadium.

Coach Gus Malzahn said Thursday the team practiced well this week coming off that 29-16 loss to Texas A&M, that the spirit is high and the offense can succeed. It’ll be another challenge. This will be the third nationally ranked team Auburn has played in the first four weeks. LSU is ranked 18th in the AP poll. The Tigers have already played No. 5 Clemson and No. 10 Texas A&M.

A Saturday sub-plot? Consider 11 Tigers have caught passes in the first three games, eight of those by wide receivers. Slayton has three receptions for a nifty 18.3-yard per catch average. But it is Tony Stevens, coming off a career-best eight catches against Texas A&M, who leads Auburn with 13 receptions. Marcus Davis has 10, Will Hastings has eight and Ryan Davis has seven. And who can forget Kyle Davis’ one-handed grab against Arkansas State? He’s only averaging 32 yards a catch.

Slayton was reminded this week that LSU has reputation of having a good secondary.

“It’s going to be fun. It’s a major SEC matchup,” Slayton said. “Year in and year out, they’re a really good team. So I’m really looking forward to it.”

Offensive coordinator Rhett Lashlee must like Slayton’s attitude, because “when we’ve thrown the ball to him, he’s made plays. He’s done a good job playing without the ball. He’s tried to play well and play tough and smart, and I think he’s been a very steady player for us. So he just needs to keep doing what he’s doing, and when his number is called, keep making plays.”

Slayton didn’t have any stats against LSU last season. He was redshirted. He says he’s ready now.

“I think it did help me develop everything, but I hate to lose,” he said. “Being redshirted last year, knowing I wasn’t going to be able to help my team win, it stung. You feel helpless because you can’t help your team benefit in any way. But I feel like the year helped me develop physically, and mentally prepare myself for the game. I’m grateful.”

Now? “I feel like I’ve had a solid three games so far.”

Slayton is earning a reputation as a receiver who will block, an important element in the offense, and something receivers coach Kodi Burns believed in when he was playing at Auburn. Who says Slayton will block? Lashlee does, as well as Marcus Davis, who fancies himself as a downfield blocker.

“I’m happy Marcus gave me that title. I know he thinks of himself as the best, too. So it’s all good and fun in competition.”