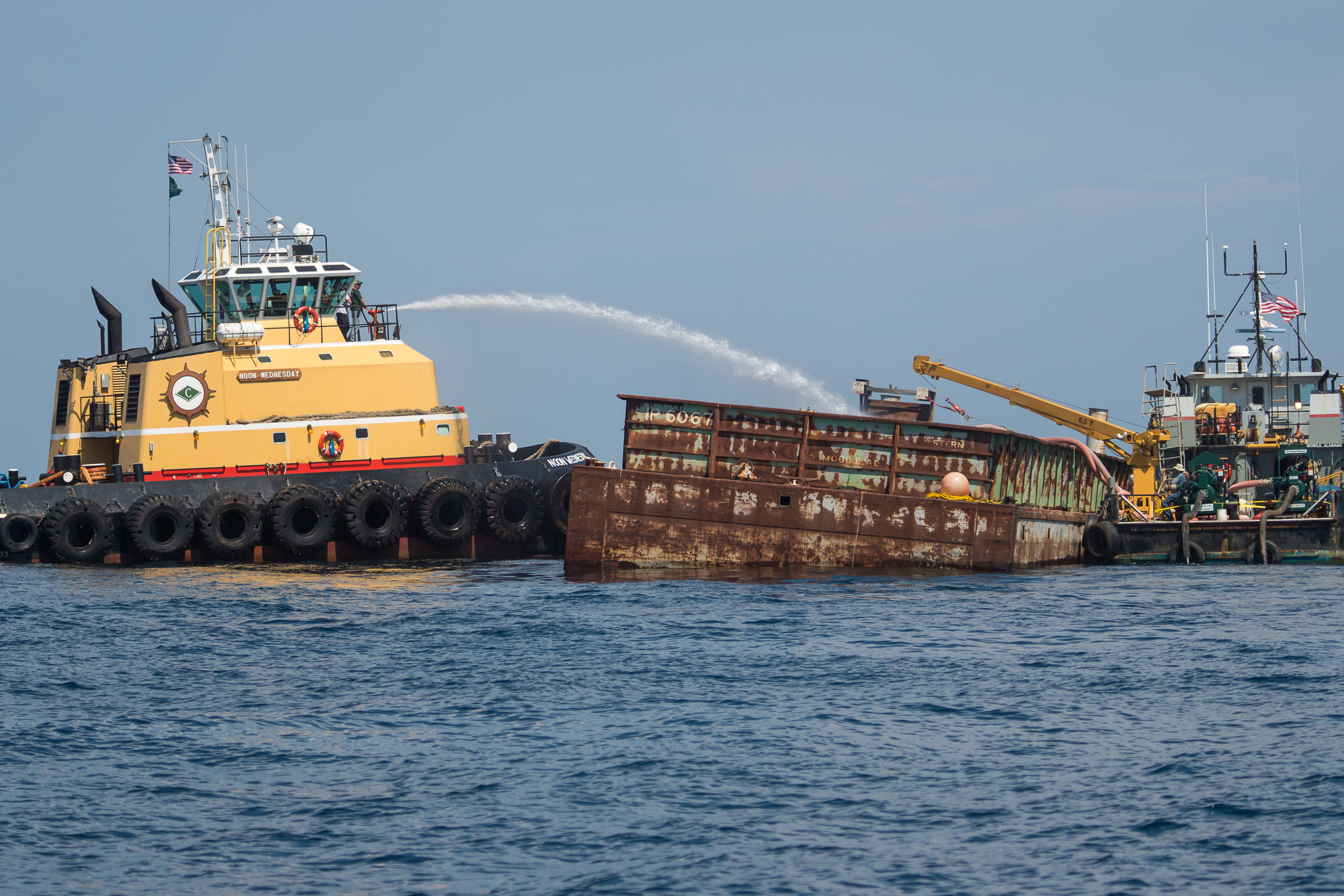 Another artificial reef was deployed off the Alabama Gulf Coast this week in Alabama’s vast artificial reef zone. While a reef deployment may not seem like news, this was indeed special because it could change the way industrial and corporate entities view options for recycling materials.

The new reef deployment was the result of a multitude of partners. Alabama Power Company provided a pair of boilers that had been taken out of service from plants in Washington and Mobile counties. Cooper/T. Smith provided a barge and transportation of the reef material. Alabama Wildlife Federation (AWF) and the Alabama Marine Resources Division (MRD) worked as liaisons to start the process and complete the deployment.

“One thing I’m so excited about with this Alabama Power reef project is that it just shows that the more we’re involved with the community, community leaders and business leaders, there are a lot of great things we can do as partners,” said Marine Resources Director Chris Blankenship. “Tim Gothard with the Alabama Wildlife Federation and Matt Bowden with Alabama Power are the ones who reached out to us with this idea. Then it grew with the work with Angus Cooper and Cooper/T. Smith. They had a barge that had neared the end of its useful life, and we needed a barge to transport the material to the deployment site.

“I think there are a lot of opportunities out there to get companies to rethink the ways they’ve always dealt with materials that have reached the end of their service life. The more we get involved with these organizations and companies, the more we can show them there are other opportunities to partner together. It’s good for the companies and good for the marine habitat. That’s why we think it’s important to get the word out about this project, because it can show what we can do with other private companies. I also hope this is a long relationship with Alabama Power as they continue to provide service for their ratepayers and, at the same time, enhance the environment.”

The new reef is located about 25 miles south of the Sand Island Lighthouse in a depth of about 120 feet in the Tatum-Winn North General Permit Area. The boilers are about 18 feet tall and about 40 feet long and weigh about 100 tons each. The barge is 195 feet long.

“A reef this size would take at least a dozen of our super pyramids,” said MRD Artificial Reefs Coordinator Craig Newton. “So this reef is a big cost savings for our artificial reef program. Alabama Power is experiencing cost savings as well because they don’t have to hire skilled personnel to disassemble the boilers and salvage them.”

To prepare for the deployment, Newton said holes were cut in the sides of the boilers to expose an array of small tubes inside the boiler.

“That’s really going to increase the surface area for encrusting organisms to attach to the reef,” Newton said. “It increases the complexity of the reef by providing refuge for small fish, and it’s really going to be easy to find on your bottom machine.

“Within days, the reef will have red snapper on it. Within months, it should have mangrove (gray) snapper on it. Then we’ll start to see the blennies and damselfish and all the little critters that will help support that ecosystem. By the time the season opens again on January 1 (2017), you could see amberjack on the reef because of the vertical relief.”

Blankenship said Cooper/T. Smith’s donation of the barge is a significant enhancement to the reef.

“The barge is part of the reef,” Blankenship said. “The barge and two 100-ton boilers will make a reef that’s going to be there for decades.

“This is the kind of partnership we’re looking for in our reef program. A company like Alabama Power can realize some savings by partnering with us as they upgrade their equipment. That material doesn’t go to the landfill or get cut up for scrap. Instead, we use it for marine habitat. It’s really a win all around. We want to reach out to other companies that might have these same opportunities.”

Angus Cooper III of Cooper/T. Smith said during his time as AWF president, he was able to witness the work Alabama Power is doing to enhance wildlife conservation in the state.

“Alabama Power is truly one of the leaders in our state when it comes to water quality and wildlife conservation,” Cooper said. “We at Cooper/T. Smith are extremely excited to partner with them on this reef project, our first such collaboration. We look forward to seeing the success of this project, both to the ecosystem and in providing a source of outdoor entertainment for our community.”

Wes Anderson, a team leader with Alabama Power’s Environmental Stewardship Projects, said the boilers had reached the end of their useful service, and it was time to either scrap them or find another useful purpose for the material.

“We became aware of other possibilities through our work with Coastal Cleanup and Renew Our Rivers programs on the Alabama Coast,” Anderson said. “Some of our guys said, ‘We sank 60,000 Christmas trees in our freshwater impoundments. Why don’t we make some nice saltwater reefs with some of this salvage equipment?’ When we approached our bosses with the idea, they were very supportive and thought it was a great idea. We were able to show a cost savings for our ratepayers and a great addition to the marine environment.”

Alabama Power Vice President of Environmental Affairs Susan Comensky added, “Being involved in the construction and deployment of this reef is especially exciting for us at Alabama Power because it’s a first for us. In the past, we have simply disposed of old equipment like these boilers, so seeing them repurposed to create a habitat for marine life is very gratifying.”

AWF Executive Director Tim Gothard said the organization’s commitment to Alabama’s artificial reef program made it easy to help foster the partnerships that led to the deployment of the Alabama Power reef.

“We were just glad to be able to connect the dots between all the key players,” Gothard said. “It’s a great public-private partnership for Alabama Power Company to be alerted to a piece of equipment they were retiring and its possible use as an artificial reef. Then Marine Resources was able to evaluate the material to make sure it was suitable for an artificial reef. And, finally, Cooper/T. Smith was able to make transportation available and add a barge to enhance the whole project.

“To me, the exciting part is to see the public and private entities work together with the NGOs (non-governmental organizations) to accomplish a project that will be great for the reef system. It will provide really great opportunities for our citizens and general public who like to fish our offshore reefs.”

The Alabama Power reef was deployed near the 70-foot Offshore Supply Boat Reef to provide additional habitat for species that anglers can target outside of the short red snapper season. MRD officials expect species like vermilion snapper and triggerfish will inhabit the reef as well as amberjack.

“The more diversified we can make the reef program, the more ecologically sound and more stable the reef system will be,” Newton said. “The size of this reef will make it better suited to handle storm events and other stresses that might happen.”