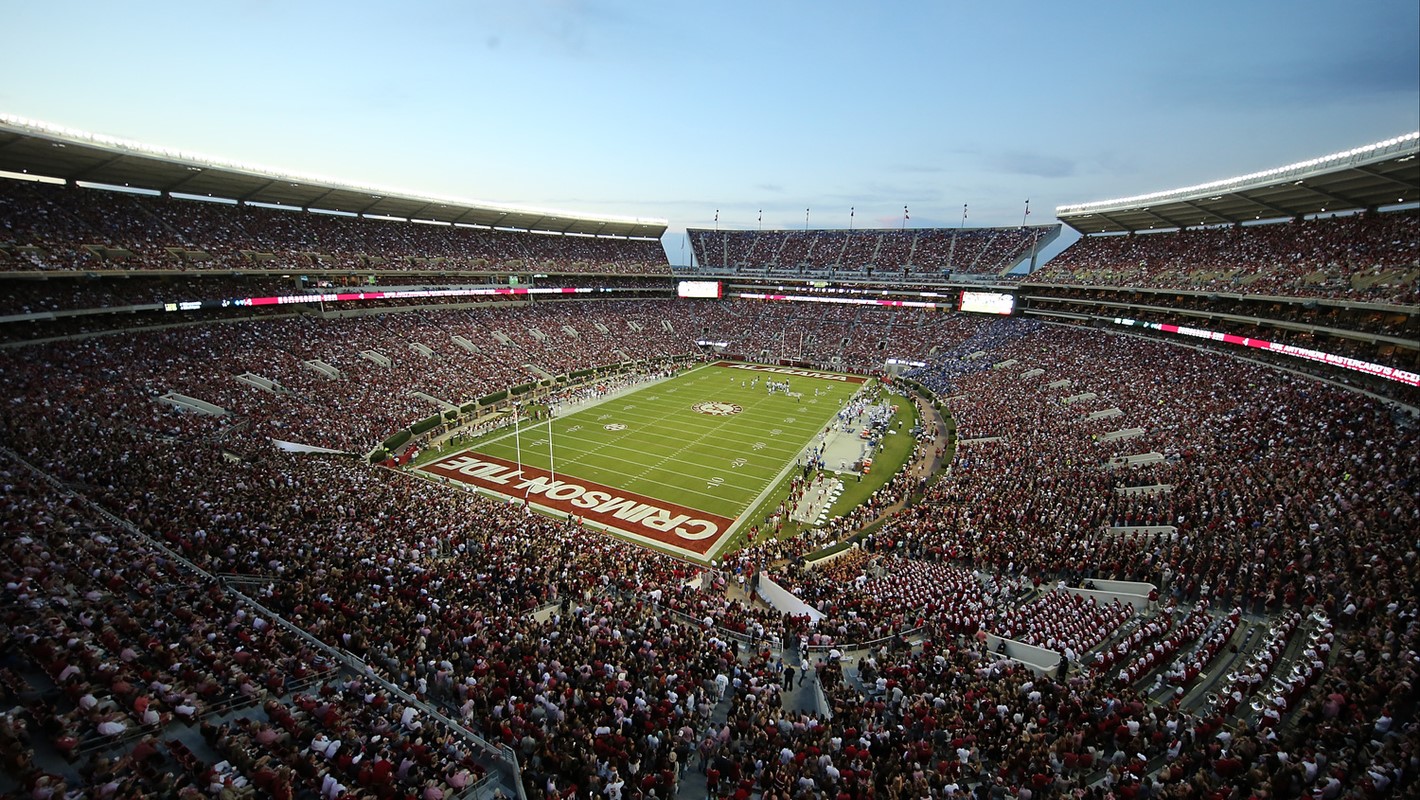 TUSCALOOSA, Ala. – Sophomore wide receiver Calvin Ridley had a career-best performance with 11 catches for 174 yards and two scores, and the Crimson Tide defense produced another dominant performance to lead top-ranked Alabama (5-0 overall; 2-0 in the Southeastern Conference) to a 34-6 Homecoming victory over the Kentucky Wildcats (2-3 overall; 1-1 SEC) Saturday night in front of a capacity crowd of 101,821 at Bryant-Denny Stadium on the Alabama campus.

Ridley caught scoring passes of 10 and 19 yards from Tide quarterback Jalen Hurts and also had a 46-yard catch to highlight a solid performance by the Alabama offense. Hurts threw for 262 yards and two scores on the night, completing 20 of 33 attempts, while freshman running back Joshua Jacobs rushed for 100 yards on 16 carries and caught three passes for 54 yards on the night. Jacobs’ rushing outing marked his first 100-yard rushing performance for the Tide. 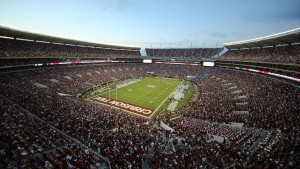 Alabama was methodical after falling behind 3-0 early, building a 17-3 halftime lead on Jacobs’ one-yard touchdown run and a 55-yard fumble return for a score by Tide linebacker Ronnie Harrison in the second quarter. Ridley’s two touchdown catches came in the third quarter, putting the game away at 31-3 entering the final period.

Kentucky quarterback Stephen Johnson completed 13 of 22 passes for 89 yards without an interception or a touchdown. UK running back JoJo Kemp led the team with 39 yards on 10 rushes while wide receiver Garrett Johnson had four catches for 27 yards to lead the Wildcats. UK punter Grant McKinnis averaged 44.7 yards on six punts, including a long of 61 yards, while placekicker Austin MacGinnis made both of his field goal attempts, from 45 and 30 yards, to provide all of the Wildcats’ points.

After Alabama took the opening kickoff and drove 35 yards in six plays into Kentucky territory, the drive was stopped on a failed fourth-down play when a pass from Hurts to Cam Sims was dropped. From the Kentucky 36, the Wildcats marched 36 yards in eight plays to take the early lead. Williams opened the drive with a 10-yard run at left guard and a 12-yard pass from Johnson to Tavin Richardson converted a third-and-one into a first down at the Tide 33. Three plays later, MacGinnis entered the game and kicked a 45-yard field goal that ricocheted off the left goal post and was good. The Wildcats led, 3-0, with 8:52 left in the first quarter.

The next Tide drive ended abruptly with a turnover when, on a first-down play from the Tide 49, Scarborough inadvertently ran into Hurts’ passing arm as he was raising the ball to pass. Kentucky linebacker De’Niro Laster recovered for the Wildcats at the Tide 43 with 6:44 left in the opening period. The Cats quickly moved into scoring range. Two runs by Williams gained seven yards before Stephen Johnson passed to receiver Garrett Johnson across the middle for 16 yards and a first down at the Tide 22. One play later, on second-and-10 at the 22, Johnson dropped back to pass and was sacked by Tide linebackerChristian Miller and Ryan Anderson. Miller tackled Johnson around the legs while Anderson came in to hit him high. Anderson’s hit on Johnson jarred the ball loose and Anderson recovered at the Tide 31. The play resulted in a loss of nine and gave Alabama the ball with 4:29 left in the first period.

Alabama took that turnover and turned it into points, driving 35 yards in 11 plays to a field goal that tied the game. Starting at its own 39, the Tide’s march was jump-started by an 11-yard run on a quarterback draw by Hurts to the 50. Scarbrough gained nine on a pass to the UK 41. Six plays later, from the UK 26, Griffith entered the game and kicked a 44-yard field goal. That tied it, 3-3, with 1:15 left in the first quarter.

The Tide broke on top early in the second quarter. The 61-yard drive in seven plays could be called “The Joshua Jacobs Show” as the freshman running back carried the ball on the final six plays of the drive while accounting for 57 of the 61 yards on the march. Jacobs sparked the drive with a 28-yard burst at left tackle to the UK 29 and had a 12-yarder to the UK nine before eventually scoring on a one-yard plunge at left guard with 9:50 left in the second quarter. Griffith’s point-after kick was good, giving the Tide a 10-3 lead.

Alabama’s defense racked up yet another touchdown on the next Kentucky possession. The Cats began at their own 31, and moved to the UK 47 when disaster stuck in the form of a sack of Stephen Johnson by Tide linebacker Rashaan Evans for a loss of three yards. Johnson fumbled on the play and Tide free safety Ronnie Harrison picked up the fumble at the Alabama 45 and returned it 55 yards for a touchdown. Griffith kick was good and Alabama had a 17-3 lead with 6:56 left in the half. The touchdown marked the seventh-consecutive game in which Alabama has scored a non-offensive touchdown, a streak that leads the nation.

After another UK punt, Alabama moved 62 yards in 14 plays but the drive ended fruitlessly as Griffith missed a 35-yard field goal try wide left with 44 seconds left in the half.

After a Kentucky punt at the end of the first possession of the second half, Alabama built on its lead by driving 78 yards in eight plays to a touchdown. Hurts and the passing game keyed the march as the Tide passed on six of the eight plays, including a key 46-yard pass to Ridley to the UK 16. Ridley, who also had a 10-yard catch on the second play of the march, capped the drive with a 10-yard catch of Hurts’ pass. Griffith’s kick was good and Alabama led, 24-3, with 10:58 left in the third quarter.

The Tide offense was starting to click. After a Kentucky punt, Alabama took the ball at its own 24 with 8:49 left in the third quarter. The Tide used some crisp passing by Hurts for most of the 76-yard touchdown drive as the freshman quarterback hit Ridley for four yards on the first play on a screen pass, then Jacobs took a screen pass and turned it into a 23-yard gain with nifty footwork as he avoided three tackles on the play that reached the Kentucky 49. One play later, Hurts hit Gehrig Dieter for 11 yards on a crossing pattern to the UK 33. Hurts then gained eight on a keeper to the UK 24 behind a crushing block by Scarbrough to the Wildcat 25 before Scarbrough rushed around right end and ran on a tightrope for 14 to the UK 11 (he had an apparent touchdown, but barely stepped out of bounds). Hurts evaded a blitzer on the next play and turned it into a seven-yard keeper to the UK 4 where Alabama called its first time out of the second half with 4:53 left in the third quarter. During the timeout, a replay review showed that Hurts was actually downed at the UK 19 on the previous play which resulted in an eight-yard loss to set up second-and-18 at the Kentucky 19. Hurts came right back and hit Ridley in the right front corner of the end zone for a 19-yard touchdown pass with 4:31 left. Griffith kick was good and Alabama led, 31-3.

Ridley’s second touchdown catch of the game was his tenth overall of the game, a new career single-game high for the sophomore, giving him 131 receiving yards and two touchdowns in the game.

Ridley built on those totals on Alabama’s next possession. Kentucky punted again and Xavian Marks took the punt off a high bounce at the Tide 34 and returned it 15 yards to set up Alabama at its 49. On the first play, Hurts hit Ridley for 43 yards to the UK six, giving Ridley 11 catches for 174 yards on the night. After Jacobs gained three on a run at right tackle, a false start penalty stifled the drive, moving Alabama back to the eight. Hurts kept for two at left end, then a pass for a tightly-covered Ridley in the end zone fell incomplete on third down on the first play of the fourth quarter. That set up a 24-yard field goal by Griffith, who was accurate to give the Tide a 34-3 lead with 14:51 left in the fourth period.

The Wildcats put together their best drive of the game on the next possession, moving 63 yards in 16 plays to a field goal. Jojo Kemp rushed seven times for 33 yards on the march and Johnson completed three of four passes for 27 yards to key the drive, which stalled at the Tide 12. MacGinnis nailed a 30-yard field goal from there to cut three points off the Tide lead. Alabama led, 34-6, with 5:09 left in the fourth quarter.

That was how it ended as the Tide offense ran out the remainder of the game time in eight plays, traveling 69 yards behind the leadership of backup quarterback Cooper Bateman. Bateman completed all five of his pass attempts on the drive, accounting for 53 yards.

Alabama’s season continues next Saturday, October 8, when the Crimson Tide is slated to visit the Arkansas Razorbacks (4-1 overall; 0-1 in the SEC) at Donald W. Reynolds Razorback Stadium on the Arkansas campus. The game will be televised by ESPN with kickoff scheduled for 6 p.m. Central Time (CT).