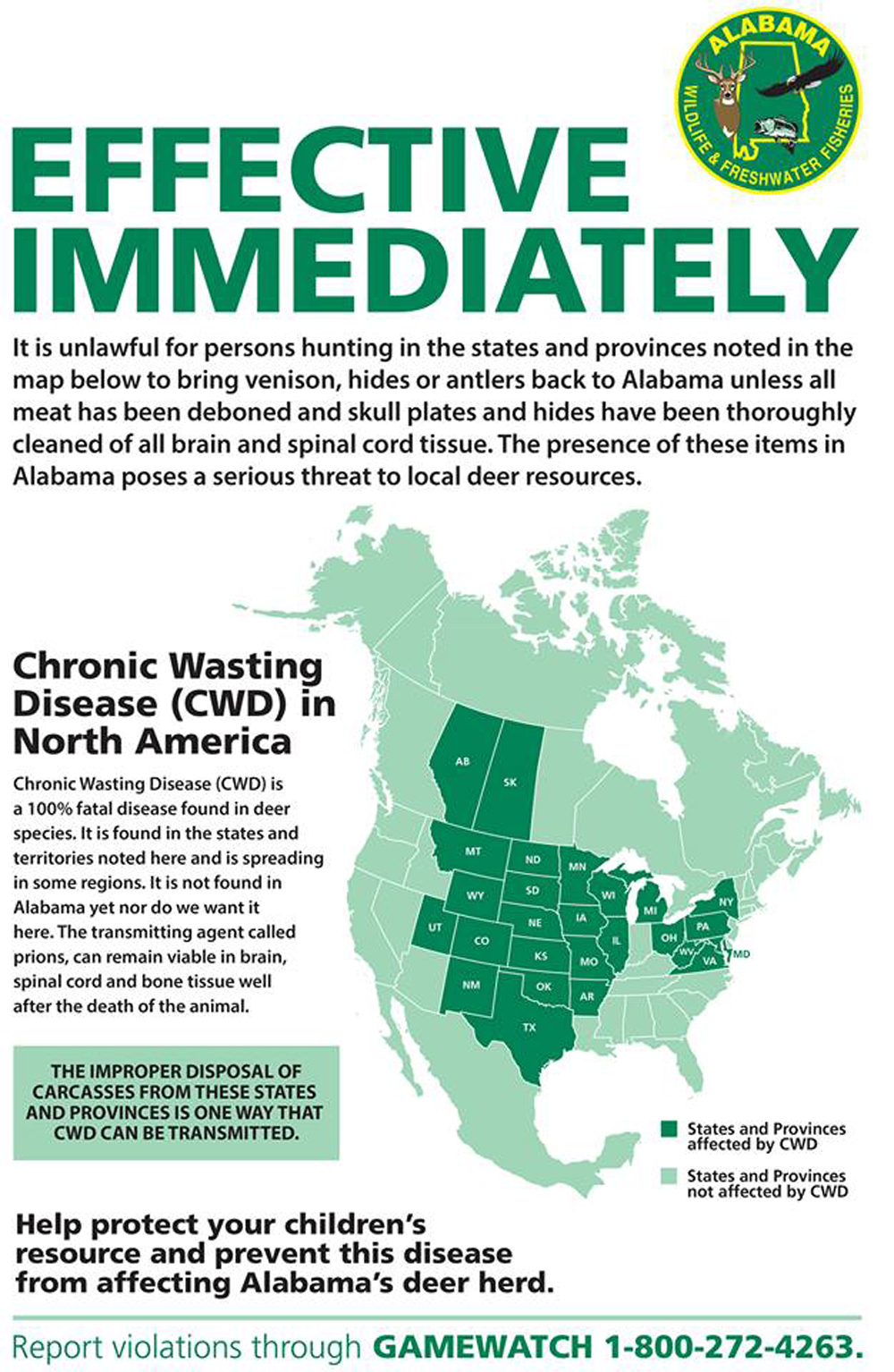 Changes in regulation for hunting season

Deer hunters who travel out of state to pursue deer, elk and moose as well as bowhunters in Alabama need to be aware of changes in regulations regarding those activities.

Bowhunters will find relaxed regulations, while hunters who harvest deer and other affected cervids in states with confirmed cases of Chronic Wasting Disease (CWD) will be under strict regulations on the importation of deer carcasses.

Under the new regulations, hunters who harvest white-tailed deer, mule deer, elk and moose in those CWD-affected states are not allowed to bring the whole deer carcass back to Alabama. Any deer body part that contains spinal or brain tissue is specifically banned from Alabama.

“Alabama’s late to the dance, but we’re at least there now,” said Chuck Sykes, Director of the Alabama Wildlife and Freshwater Fisheries Division. “We have now joined 36 other states with similar regulations. It’s been prohibited to bring live deer into the state for some time now. The intent of that regulation was to help prevent the potential to spread diseases. A dead deer can transmit diseases just like a live one. So this was just logical. We finally did something that should have been done a long time ago.”

Sykes said to be in compliance with the new regulation, hunters who harvest a deer in a CWD-affected state must debone the meat, cape the deer and cut off the skull plate with the antlers attached. That skull plate must be thoroughly cleaned of all brain material before it is imported into Alabama.

CWD is a disease similar to Mad Cow Disease in cattle and scrapie in sheep that affects deer, elk and moose. CWD is a form of transmissible spongiform encephalopathy that starts to debilitate the affected animal and results in death.

Thankfully, adjoining states have not had any confirmed CWD cases. However, the insidious disease has been confirmed in Arkansas, Texas, Missouri, Ohio and numerous other states and parts of Canada. States with confirmed cases of CWD have been severely impacted by the disease.

“Unfortunately, that’s not that far away,” Sykes said. “The threat for us is the fear of the unknown. I just know what other states are going through. I know I don’t want the state of Alabama to have to go through it. I know people in Ohio and Arkansas, and it’s devastating to the way of the life, to the economy and to the resource. This is something that impacts me, too. I’ve hunted in Ohio. I’ve hunted in Texas. I’ve hunted in Missouri.

“No, you can’t just go kill a deer in those states, throw it in the back of the truck and come back to Alabama. That may be an inconvenience, but it pales compared to the inconvenience if CWD gets to Alabama.”

Sykes said some states with confirmed CWD cases have set up CWD containment zones where every deer harvested in those zones must be taken to a check station.

“Not only is that interfering drastically with what hunters are used to doing, but look at the budget drain it is causing the agencies that are having to devote all this time and manpower to check all those deer,” he said. “We don’t want it here. The only way to stop it is to never let it cross the border. This is one more step to help that.

“Remember, this is just from states with confirmed CWD cases. If you go to Mississippi, Georgia, Tennessee, Kentucky or Florida, you’re fine. If the state has CWD, you can’t bring the whole deer back.”

Wildlife and Freshwater Fisheries (WFF) has been testing deer since the 2001-2002 season and none of the more than 5,000 deer sampled have tested positive for CWD.

“We sampled about 300 deer from the wild last year,” Sykes said. “All captive cervids over a year old that die, by regulation, have to be tested for CWD.”

Sykes has been traveling all over Alabama conducting seminars to help hunters understand the new regulations, including the Game Check harvest-reporting system, which is mandatory for the upcoming deer and turkey seasons. One thing he discovered during the seminars is that between 60 and 80 percent of the hunters in attendance said they hunted deer in states other than Alabama.

“With that many people hunting out of state, this is a serious, serious matter,” he said. “CWD never goes away. It is 100 percent fatal. If the deer gets it, it dies, plain and simple. If you get it, you never get rid of it, not just in the deer but the environment. It’s always there.

“When I say you never get rid of it, in Colorado where it was first found in captive mule deer, they killed all the deer and waited many years to put more deer back there, and CWD killed those deer, too. Once you get it, you never get rid of it. We don’t want it in Alabama, and the best chance to keep it out is to make sure it never crosses our border.”

Sykes said deer infected with CWD will exhibit symptoms similar to EHD (epizootic hemorrhagic disease) – lethargic, a need to be around water, loss of the fear of humans and emaciated bodies. Hunters who see a deer that has any of those symptoms should contact WFF biologist Chris Cook at 205-399-5716.

On a more upbeat note, WFF has relaxed some of the regulations that govern the use of archery equipment to hunt deer. The minimum draw weight for bows has been reduced from 35 to 30 pounds. The restrictions on arrow length, broadhead weight or blade thickness have been removed. However, arrows must have a broadhead with at least two sharpened edges and a minimum cutting diameter of seven-eighths of an inch.

The revised regulation also states that crossbows must be equipped with a working safety and have a minimum peak tension of 85 pounds at normal draw.

“The technology has improved so that the kinetic energy and speed are there to hunt effectively and be responsible to the resource,” Sykes said. “Things are a lot different from when I started bowhunting with an old Bear Whitetail II. You had to get that thing up to the highest draw weight to get the arrow speed needed.

“These changes are just to make it as simple as possible and make it easier for anyone who wants to get into bowhunting and enjoy the outdoors. This could apply to anybody. My neighbor just had rotator cuff surgery, and he had to dial his bow down to where he could shoot.”

Speaking of new technology, one air gun company has produced a model that uses compressed air to propel full-length arrows at lethal speeds.

Sykes said those type weapons will fall under the air gun regulations and not archery. The air bows will be allowed during the air rifle and muzzleloader season and open gun deer season. Air guns must be at least 30-caliber to hunt deer and are legal during the same seasons as air bows.