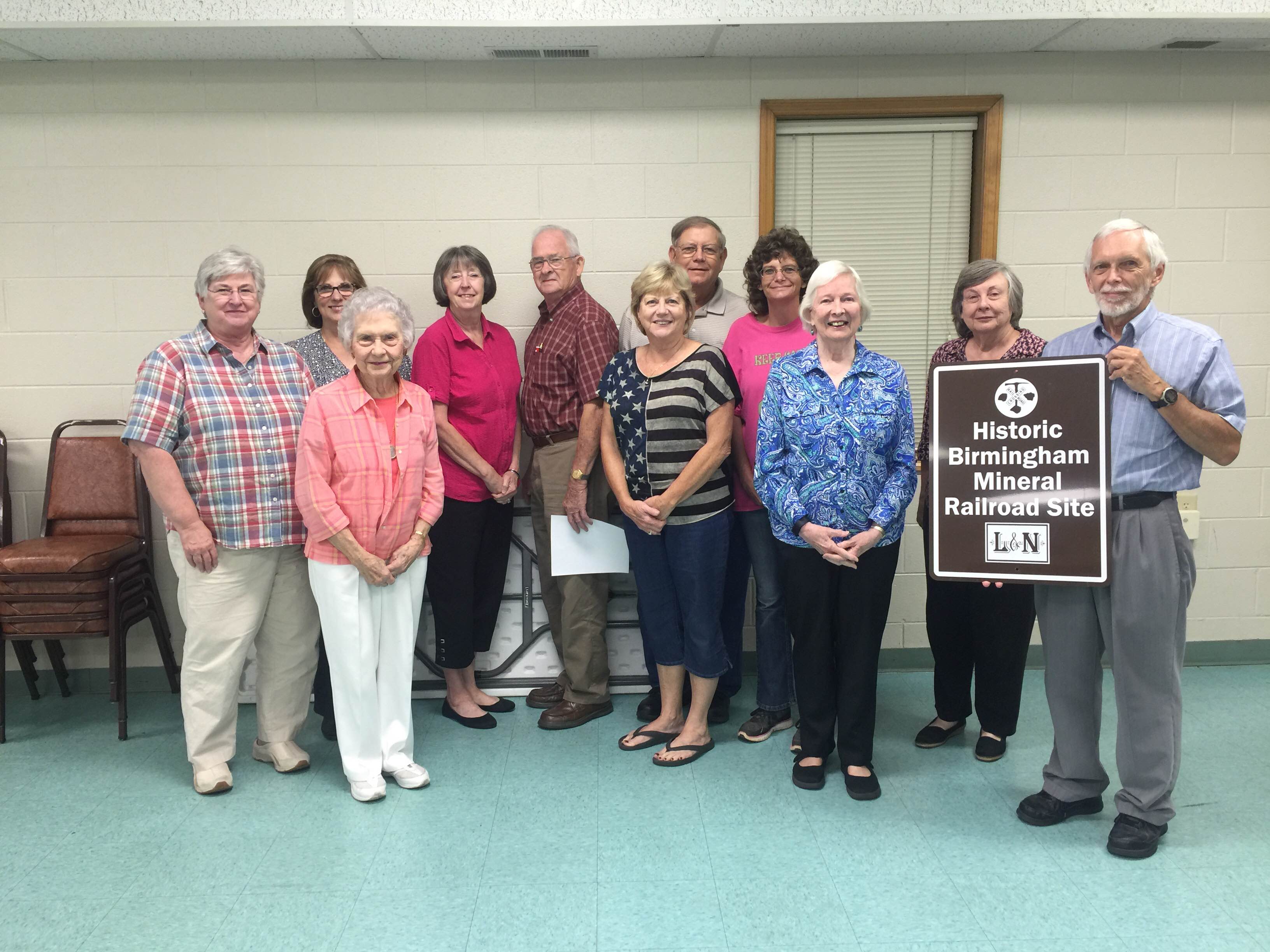 James Lowery displays one of the project’s signs alongside the Clay Historical Society. (photo by Bethany Adams)

CLAY – Birmingham’s iron industry was one of the most influential parts of the city’s development and history. The industry’s impacts on the area remain evident to this day, and remnants are clearly visible in places such as Vulcan Park. But some of the evidence is a little harder to see.

The Historical Birmingham Mineral Railroad Sign Project is an initiative to install signs in high-visibility locations along the former railroad system. It is a project of the Mid-South Chapter of the Railway and Locomotive Historical Society, a non-profit based which was founded in 1921.

Currently, Lowery has installed 113 signs throughout Birmingham and the surrounding cities, including Trussville and Pinson. The signs also mark locations of historical significance, including restored structures such as 301 Bistro, a station-turned-restaurant in Tuscaloosa.

“People drive, walk and bicycle every day in areas where the historic Birmingham Mineral Railroad (BMRR) ran throughout the Birmingham and surrounding areas without ever being aware that the BMRR was located in those places,” Lowery wrote in the presentation. “This project’s purpose is to make them more aware of this part of this area’s iron industry history.”

The BMRR was a 253-mile railway system of the Louisville and Nashville Railroad Company which was made up of 31 branches and utilized both steam and diesel engines. The system was used for various purposes, but most predominate was its role in the development of the area’s iron industry. Lowery wrote that “Birmingham’s phenomenal early development was due in large part to the BMRR.”

The first portion of the system was built in 1884 in what is now Red Mountain Park, and the system’s use continued for a century, with portions of the railway still being used as late as 1988. Before the end of that time, the system had been used for mail and passenger transportation and had grown to cover six different counties in Alabama, as well as the corner of a seventh.

Since the abandonment of the BMRR, some stretches of the system have been transformed into walking trails, and others have become part of the local landscape. Remnants of the system are still visible in the form of nearly unchanged culverts in places like Ruffner Mountain Park and surviving road beds in a number of neighborhoods throughout the Birmingham area.

On the project’s website, Lowery provides “self-guided tours” of portions of the system. During his presentation, he outlined a number of signs to look for including noticeably flat areas of land, cuts into the mountainside and roads cut through ridges. In rarer cases, evidence such as surviving signs or abandoned crossties may be found.

The history of the Birmingham Mineral Railroad is deeply-woven into that of Birmingham and the surrounding areas. Even in cities like Trussville, the impact of the area’s iron industry history can still be seen. You only need to know where to look.

For more information on the Historic Birmingham Mineral Railroad Sign Project, upcoming presentations and how to make a contribution, visit Bham-MRR.com.