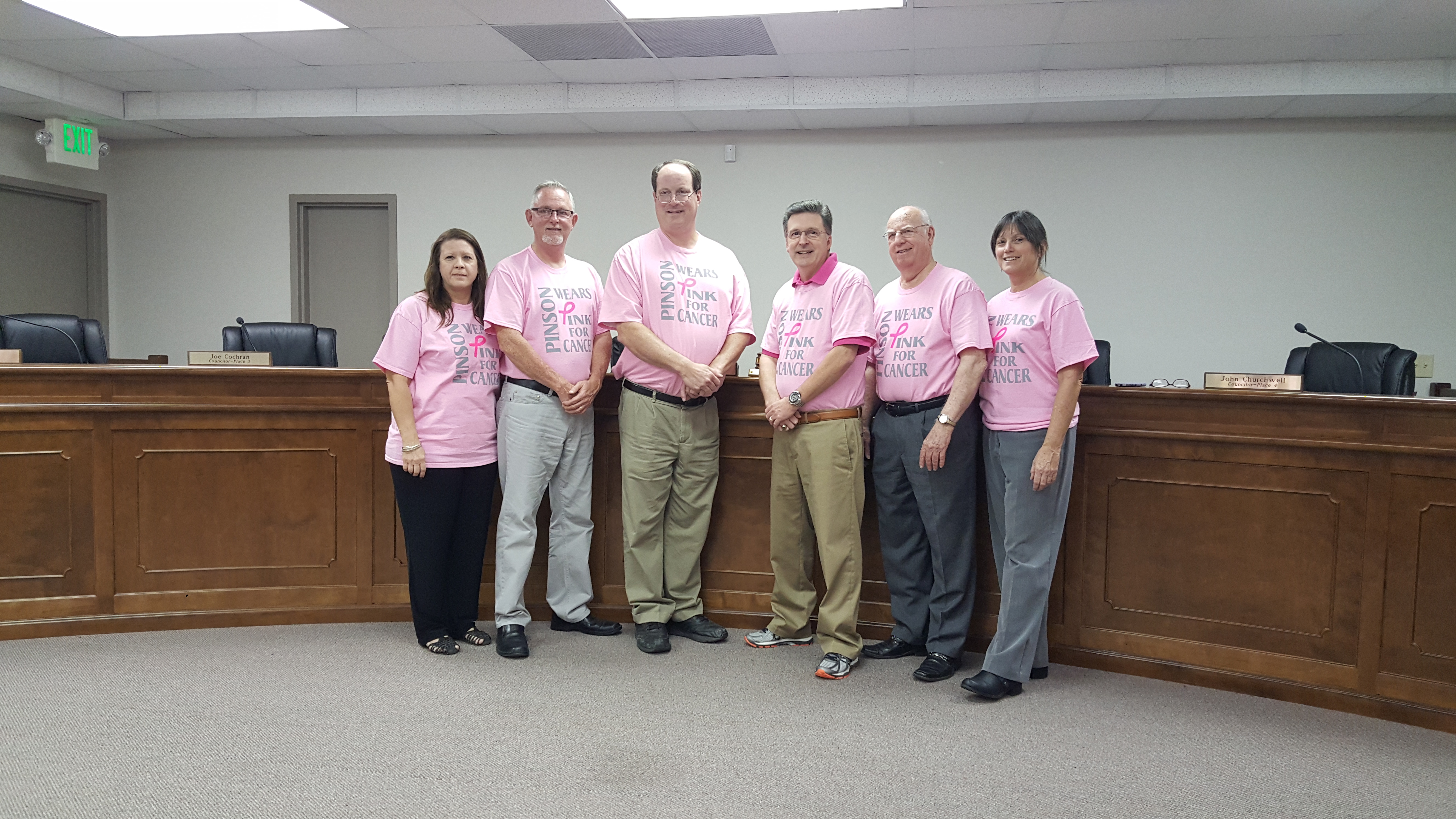 PINSON – Pinson’s City Council proudly wore their pink t-shirts Thursday in honor of breast cancer awareness, and spent the bulk of their meeting time discussing plans for upcoming projects and events, as well as a few safety warnings.

The council voted to accept a new set of policies and procedures for youth sports as presented by parks director Mike Sullivan. The primary focuses were on maintaining the park and promoting good sportsmanship and honorable, ethical values in the players, Sullivan said.

Other policies include how the board of directors is structured, how each sport will have its own director, and how each director will work with a committee directly dedicated to that sport. Guidelines have also been made in regards to the conduct of players, coaches and parents.

Alcohol and tobacco products are banned from the park already, but Sullivan noted that many smokers ignore the latter rule. Councilman Joe Cochran suggested the possibility of a dedicated smoking section at the park in the hopes that people would be more courteous.

Sullivan also discussed the position for assistant parks director. According to Sullivan, the salary originally proposed for the position has been the deal-breaker for many of the people qualified to do the job. The council voted to raise the proposed salary to between $15 to $20 an hour based on experience and qualifications.

In other public safety news, this region is now under Stage 3 Drought conditions, and residents should be very careful with fire, Mayor Hoyt Sanders said. This means that there is a statewide burn ban in effect and area residents who receive their water from Birmingham will be limited to only one hour of irrigation per week until conditions improve. Other requirements can be found on the Birmingham Water website.

The city will have a special planning and zoning meeting Tuesday, October 24 to discuss the city Master Plan. The plan must be revisited every five years and is open to the public. The meeting begins at 6 p.m.

Senior citizens are invited to enjoy a concert at Bicentennial Park Tuesday, October 25 from 10 a.m. until noon, event coordinator Pat Wise said. The band is called Pure Country and performs traditional country and gospel songs. A potluck dinner will be provided.

Wise, who is also involved with The Turkey Creek Nature Preserve, also talked about an event on Sunday, October 30 at the creek. People are encouraged to come out with their flashlights and lanterns and tell ghost stories by the creek that evening.

This year’s Veterans Day luncheon will be held at the Rock School. The menu will include pork tenderloin, chicken tenders, broccoli, corn casserole, banana pudding and cake. There will also be a slide show with pictures of veterans. Veterans are asked to register for the luncheon by contacting city hall with their name and service number. The luncheon will be held Friday, November 11.

The council also voted to annex one property on Miles Spring Road.