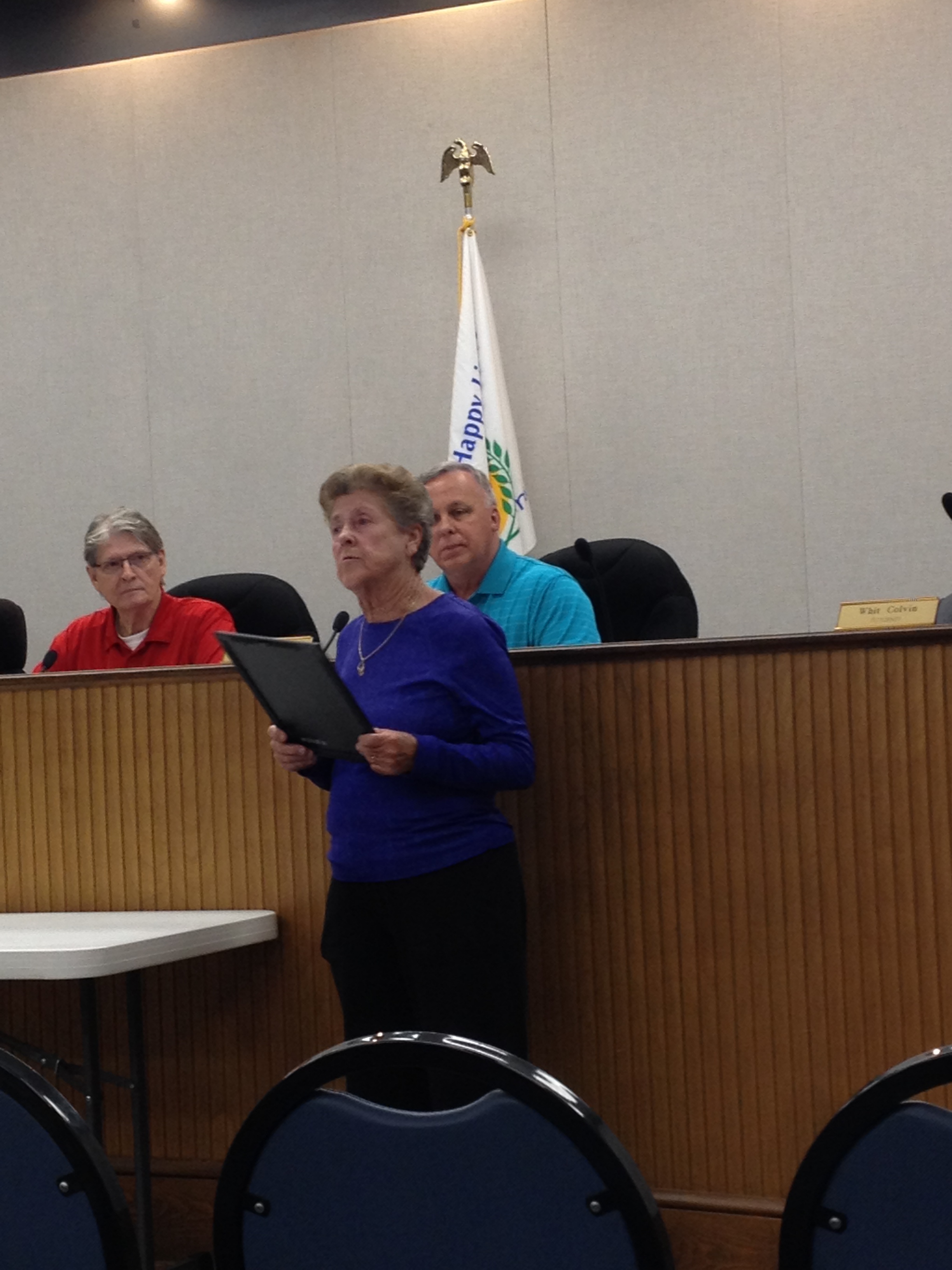 TRUSSVILLE – Tuesday’s Trussville City Council meeting was one of recognition for two integral members of the Trussville community.

The council presented two proclamations, one to Bea Clark and the other to Mayor Gene Melton.

Clark has been director of tennis and Trussville tennis pro since 1999. Her accolades include a four-year scholarship at UAB, being voted MVP her freshman year, being elected pro of the year by the American Tennis Association in 1999 and female tennis player of the year by the Alabama Tennis Association. She’s also ranked nationally, even though she didn’t begin her competitive career until age 41.

“I played a little tennis with her one time and she fusses at me for not coming back,” Councilman Buddy Chaot said. “She’s done a tremendous job and I know a lot of you are here to support her and what she’s meant to the community.”

The proclamation recognized and thanked Clark for her 16 years of service to Trussville.

“I intend to stay in Trussville and play because this is my home away from home,” Clark said. “I appreciate the honor. Thank you for the wonderful ride.”

Mayor Gene Melton was also recognized for his 20 years of service to Trussville as mayor. The proclamation thanked Melton for his service as the longest serving mayor in Trussville’s history.

Councilman Brian Plant regarded Melton as his mayor, and the only mayor his children have ever known.

Roberts remembered purchasing property in Trussville in 1996 to build his family home, and Melton had just taken office as mayor.

“Just as a citizen I wanted to say to the mayor how much I appreciate what he’s done for the city,” Roberts said. “It’s a great city we live in, everywhere you look, and that didn’t happen by accident.”

McNeal shared how Melton had a hand in restoring the Cahaba School into what is now Cahaba Elementary School.

“Our board of education at one point had the idea to tear down that high school and that’s the worst thing we could have done,” McNeal said. “Instead of the mayor telling us how stupid we were, he respectfully helped us understand the importance of that structure. He and this council have never said no to us about (the board of education) anything, which is extraordinary and unique.”

Additional matters during the meeting included declaring 20 phones from the Trussville Police Department as surplus. Choat made the motion to authorize the disposal of personal property no longer needed by the city, selling the phones at $150 per unit to the city of Ozark. The motion was unanimously approved.

The council also voted to put their support behind Amendment 14.

Councilman Alan Taylor explained the bill, saying if a bill comes out in a certain county, out of courtesy, legislators don’t’ vote on that bill from the other parts of the state.

“It has been ruled that an abstention is now a negative vote,” Taylor said. “We have about 600 bills that are in jeopardy and that would have to be re-introduced. This amendment would correct that.”