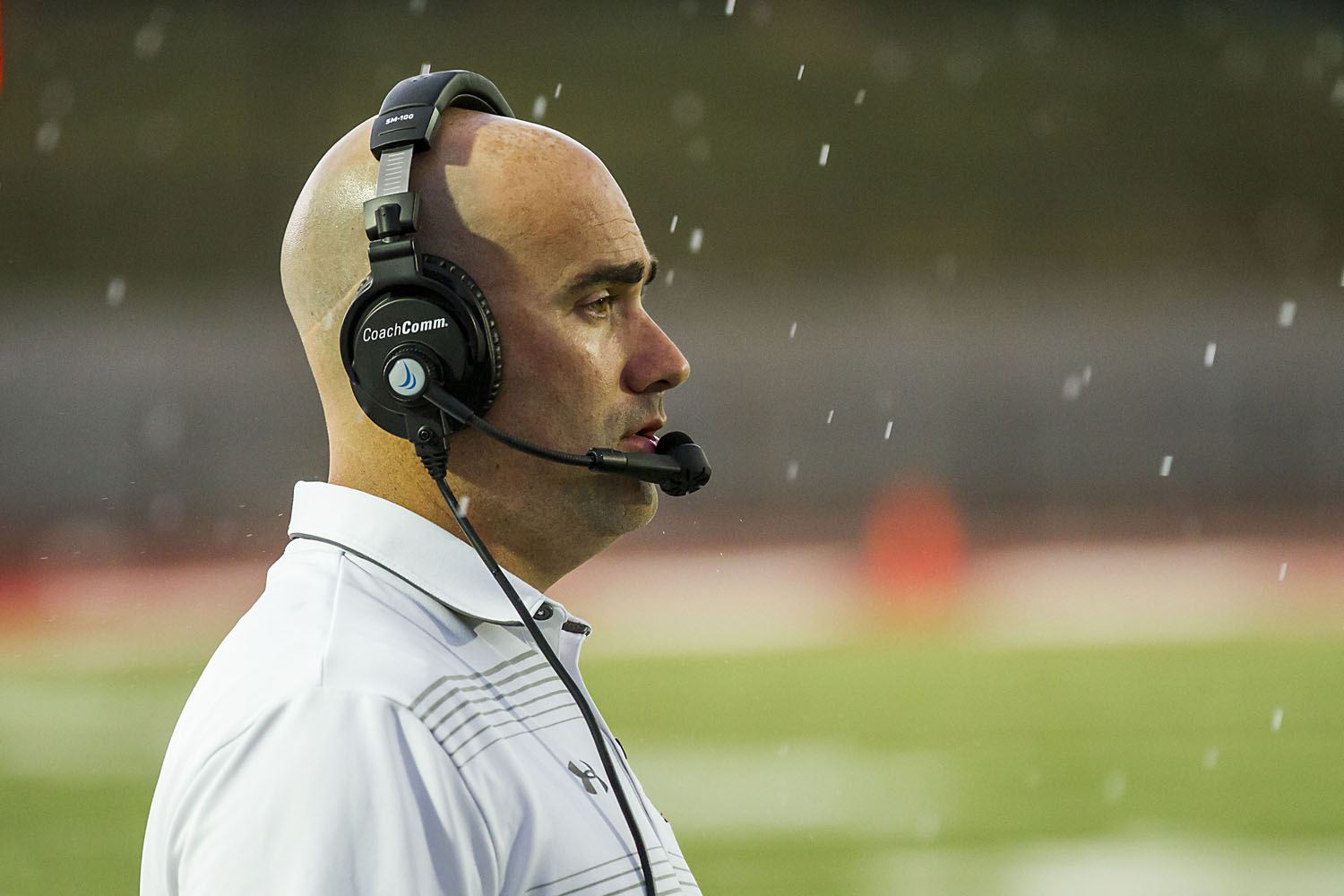 Floyd: Passing on the message from Mom, Dad and Malzahn

“Remember that mentor leadership is all about serving. Jesus said, ‘For even the Son of Man came not to be served but to serve others and to give his life as a ransom for many.’”

Some coaches are influenced by youth coaches or high school coaches very few will have heard of. Some have the good fortune to play for a high school coach who is a legend in his state. Very few get to play and coach for a man who makes it to the top level of college coaching. And very few have a parent who is at the top of his particular field. But that’s what Hewitt-Trussville football coach Josh Floyd has to turn to when he needs guidance. He also has a mom who has overcome some challenges, and that’s helped the Huskies coach as he faces his own personal challenges.

This is the third in a series of stories about the high school football coaches in our area and the people who influenced them, even as they influence our youngsters.

TRUSSVILLE – Josh Floyd was born in Texas, like a lot of great high school quarterbacks and future great college quarterbacks. But his pastor-father moved his young family to Arkansas when the boy was 7, and his name probably will be inexorably linked to that state through his football exploits.

He was uncomfortably aware, however, that ministers move all the time. His father reminded him of that frequently. Floyd and his brother, Nick, were relieved they managed to get through high school in Springdale, Arkansas.

“Dad would always say, ‘If God calls us, we’ve got to go,’” Floyd recounted. “We liked where we were at, we didn’t want to move.”

He need not have worried, though. Ronnie Floyd and his wife, Jeana, celebrated their 30th year at Cross Church in Northwest Arkansas on Sunday.

If you’re a Southern Baptist, you know the name of Josh Floyd’s father. Ronnie Floyd leads Cross Church’s multiple church campuses, one of the 10 largest churches in the Southern Baptist Convention. He also led the SBC as president for two terms, from 2014 until this past June.

If you’re a casual football fan – probably even if you’re not – you know the name of Gus Malzahn, now the Auburn head football coach. Before that, he was known to real football fans as the high school coach who was picked by then-Arkansas head coach Houston Nutt to revamp his offensive attack. After a year there and two more as OC at Tulsa, Gene Chizik hired him to be his OC at Auburn. A national championship later, everybody was riding the Gus Bus and the Hurry-Up, No-Huddle.

Josh Floyd was driving that bus long before it came to Auburn. He played for Malzahn at Shiloh Christian High School in Springdale, Ark., quarterbacking the Saints to the 1998 state championship after leading them to state runner-up status the previous season. He was a sophomore quarterback when Malzahn decided to try the new offensive scheme, so he was there at the start.

Floyd finished his three years as starter with a big senior year, 5,221 passing yards and 66 touchdowns and running for 657 yards. After an injury during his sophomore season at Ouachita Baptist caused him to hang up his cleats for good, Floyd went back to Shiloh Christian and served as head coach from 2004 to 2013, winning four state championships as he posted a 99-29-1 record in 10 seasons.

Hewitt-Trussville came calling, and Floyd consulted with his mentor before making the move to become the Huskies football coach.

“He was obviously a huge influence on me, starting as a player because just from the pure football side of it, I thought he taught me a lot about the game and really took our school we were at at the time to a new level. He taught me a lot about football, which I think has carried over, but more than that he helped teach me about work ethic and being disciplined.”

Many people think of Malzahn as a mad scientist offensive genius. The truth is, he brought innovation to all aspects of the game while at Shiloh Christian and later at Springdale. He coached some defense – since the small school had maybe five or six coaches on the staff, and most of the players, Floyd included, played both ways.

And there’s a method to his “madness.”

“I think the thing that Coach is great at is all the details,” Floyd said. “He just doesn’t miss a thing and that’s the reason he’s at where he’s at right now. But even when he was a high school coach, you always felt over-prepared because we went over every single detail every single week. We always had great confidence going into Friday night and that’s what I try to do with my guys. A huge part of this game is mental, and I don’t think people understand that all the time. Those are some of the things we try to instill in our guys now, because we want them to play with confidence on Friday night.”

Malzahn taught his team to be accountable, and he also pushed his players physically and mentally.

“He taught us how to push through some pain to get to the next level. He always would say you can always go a little bit more than your body is telling you. He would talk about being a winner, not a loser, in your head. Everybody’s got it, no matter how old you are, that negative, loser talk that creeps into your mind. You’ve got to kick that out of your mind, fight through that, whether it’s physical pain or mental pain.

“You’ve got to learn to fight through some of those circumstances in your life.”

He passes that along to his players on the field and off the field, as they prepare for life down the road.

“He used to talk about there are times you don’t feel like getting up in the morning — but you know, at the end of the day, I’m a husband, father, I’m responsible for my three kids and I’ve got to go to work.”

Coaches have a unique opportunity, given their position and the intense amount of time they spend with players in a short period, to make an impression that sometimes parents don’t.

“I think there’s just so much time I get to spend with these guys and it’s something they love to do,” Floyd said. “I think that helps. We make them work hard — and they don’t always the great intention to work hard, but they do love the game. You kind of have that over their heads.

“We give them examples about life all the time: ‘You’ll get married one day and you’ll be in charge, trying to provide for your family’ … we talk about treating women right, how you should treat your wife one day … that there’ll be times you don’t want to do something. That’s the thing sometimes in football. After a game Friday night, you don’t want to wake up Saturday morning and come up here, watch film, lift weights. You may not want to do that, but in the end it’ll benefit you.”

Growing up as a preacher’s kid was a “unique” thing, Floyd said. Especially when the father is as visible as Ronnie Floyd. The coach said among the many things he has learned from his father is how to be responsible for, and to, a lot of people.

“The church is the largest in Arkansas, so one thing I learned from him is when you’re the leader of a lot of folks, it’s about a lot more than going up there preaching a sermon on Sunday. There’s a lot that goes into the week. People only see you up there talking for 30 minutes on Sunday, but there’s a lot more to it than that.

“One of the main things is, he always challenged me to be a leader, even when I was in high school. I got to see how he dealt with people and tried to have a vision for people – I think my dad has always been a very visionary guy. He helped me try to have big goals in life and have a vision for big things.”

Floyd said that translates to helping his coaches move on to their own head jobs. And he said his father is also a very giving person, and that made a big impression on him.

“God’s blessed him and Mom in a lot of ways, but he would always tell me, that blessing is not for you, it’s to bless somebody else. It may be buying somebody a meal one day, or it could be something even bigger.

“And obviously, I’ve tried to be a godly man, trusting in God no matter the circumstances in life. My mom had breast cancer when I was 10 or 11. Fortunately, God healed her from that, and I saw her and my dad go through that a little bit. It’s given me courage to fight through things.”

He needed that courage when he was diagnosed with Multiple Sclerosis in 2012.

“It was a shock,” Floyd said. “I didn’t really know what it meant, but it sounded really bad, then they’re showing you an MRI and spots on the brain. And I said, well, it isn’t good.”

There’s no cure, but medicine has improved and is more effective than it once was. If caught early, outcomes are better.

“There are challenges there at times,” Floyd said. “Fatigue is a big one. I don’t know if that’s the MS or just from a long day. They told me at the very beginning that heat and working long hours are not positive things. I said, ‘That’s too bad, that’s what I do.’ That’s what coaches do. But MS affects people different ways. It’s challenged me to take care of myself, not that I was in bad health at all.

“I think the fact that I saw my mom fight through some of those things helps me. Got to see her go through that and I got to see how you still try to have faith through those things and trust the Lord has bigger plans.”

Having MS has offered him the opportunity to minister to other people, including coaches, who have the disease.

“I try to look at it as an opportunity to help someone else. It’s not an opportunity I wanted, but I try to use it. At the end of the day, when things happen you can either sit around feeling sorry for yourself or you can fight through it, use it as a tool to help people.”