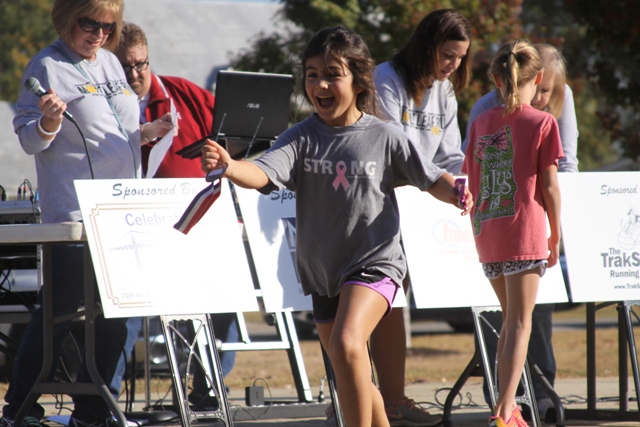 TRUSSVILLE – Chip timing is the latest thing in timing for races, and The Trussville Area Chamber of Commerce Maple Leaf Run has jumped onboard. The race was held on Saturday, October 29, at The Mall in historic downtown Trussville. About 200 runners participated in the 5K and kids’ run combined in this 37th annual event.

The Maple Leaf Run was also the kick-off event for a new race series. The Cahaba Race Series is a partnership between the Maple Leaf, the Blow-Away 5K, No Longer 5K and the Birmingham Zoo 5K. Upon sign-up, each runner gets a promo code that grants $10 off each race registration. There is a $5,000 purse for age group winners, plus a drawing for a cash prize from all those who register. Registration in the series is free, and the first 250 people who register get a free t-shirt.

A portion of the proceeds from the event will go to the chamber’s scholarship fund and also to Turn Trussville Pink, a community project in support of breast cancer research. Joshua White, founder of Turn Trussville Pink, was on-hand for the check presentation. A check for $500 was presented.

Prizes were awarded in each age group as well as overall in the 5K.

Complete race results and times can be found at www.dg-racing.net.

The Chamber was pleased again this year to have Puttin’ On the Ritz D.J. Service and also a family fun zone, providing fun and musical entertainment for runners and their families while results were tallied.

Independence Place, a faith-based non-profit organization developed to meet the social and recreational needs of adult individuals with exceptional needs, helped to stuff the runners’ packets. Pink ribbons were worn by the runners in support of Turn Trussville Pink and were made by 6th grade Girl Scout Troop #163 from HTMS.