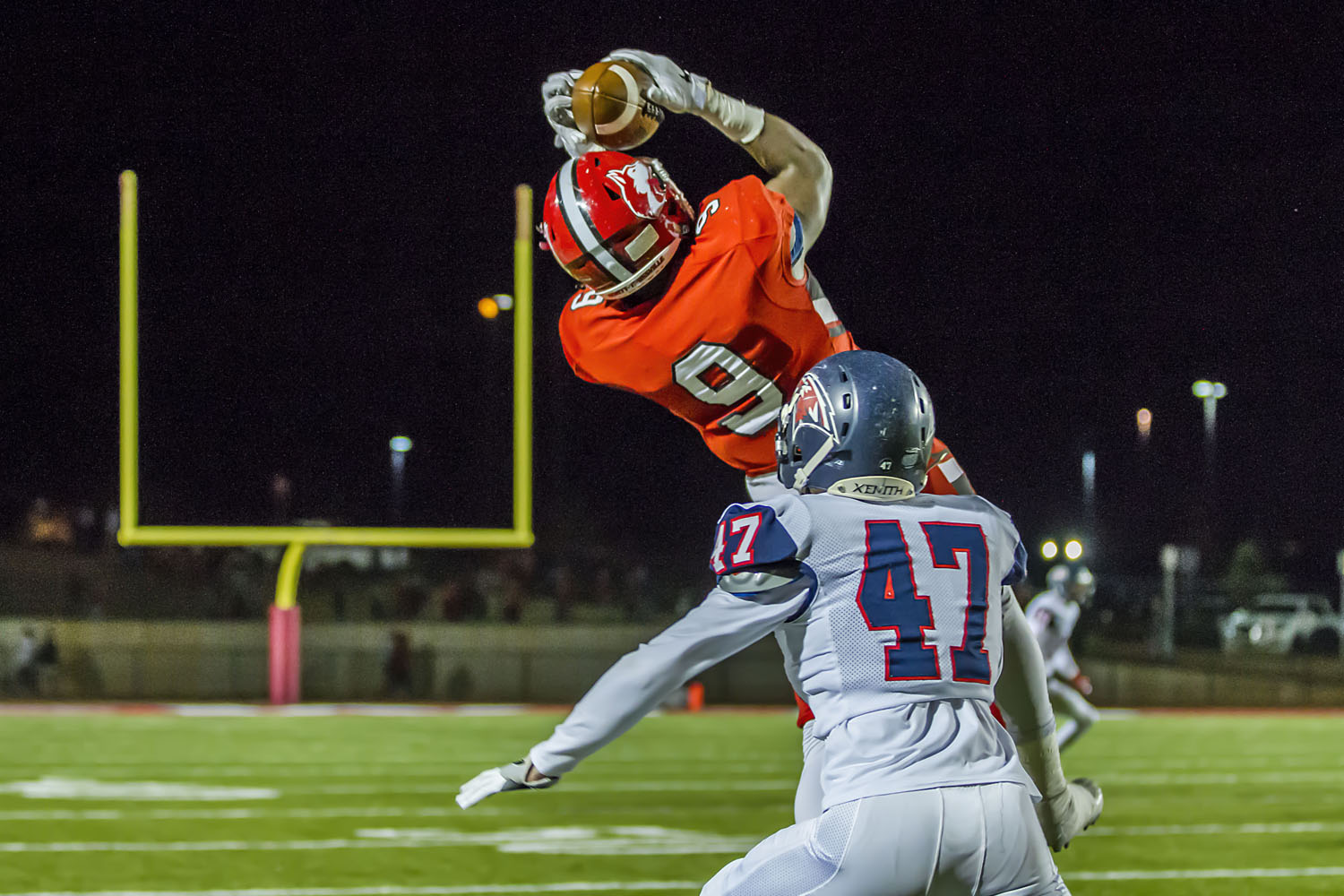 Huskies improve to 11-0 with rout of Eagles

TRUSSVILLE – Eleven down, three to go.

The Hewitt-Trussville Huskies, entering the Class 7A playoffs as the No. 2 team in the state, make short work of the Oak Mountain Eagles in the first round of the state playoffs.

The Huskies (11-0) had little trouble with the Eagles (3-8), whipping the Shelby County team from Class 7A, Region 3 63-21 at Hewitt-Trussville Stadium on Friday 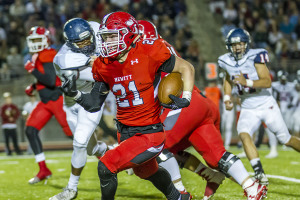 The Huskies will face Gadsden City in round two.
Phot by Ron Burkett/The Trussville Tribune

The Huskies advance to the second round of the four-round 7A playoffs. They will face Gadsden City, a 15-7 winner over ninth-ranked Mountain Brook. That game will be played at Hewitt-Trussville Stadium on Friday at 7 p.m.

It will a rematch against the Titans from Region 4. The Huskies won 28-14 at Gadsden the third game of the season.

The Huskies had put this one away by halftime. The offense was sharp, even though Hewitt-Trussville was coming off a bye in the final week of the regular season.

“It’s always a concern when you’re coming off an off week,” coach Josh Floyd said,” but I think it worked out perfect for us, especially against this offense, they’re hard to prepare to defend in just a week. We worked on them a little bit last week, we obviously rested our bodies a lot. Our guys were hungry to hit. I think it worked out in our favor this time. Our guys were so hungry to hit. We had a pretty physical practice on Tuesday we almost had to scale back a little bit they were so ready to hit.”

“I was really proud, our offense came out and executed really well the first half and, after the first series, our defense played great.”

The Huskies wasted no time in getting on the board. Connor Adair led the team on a 75-yard, nine-play drive. Adair completed all four of his tosses for 34 yards and Noah Igbinoghene carried twice for 28 yards. An 8-yard pass from Adair to Elliott McElwain set up McElwain’s 4-yard run. Parker Colburn made the first of his nine extra points to give Hewitt a 7-0 lead with 9:33 left in the first.

But the Eagles’ option offense answered. Wyatt Legas mixed the option with his passing and took Oak Mountain on an 80-yard scoring drive. Legas hit 6-of-6 passes and Daniel Salchert cashed in the TD on a 5-yard run. Nick Carney’s PAT tied it at 7 with 3:01 left in the opening quarter.

But the “HuskyFast” offense responded in a hurry. Grayson Cash had a 22-yard run and a 16-yard pass from Adair to McElwain led to Cash’s 11-yard TD, his first of three on the night. The Huskies took a 14-7 lead.

Floyd then gambled, and Colburn executed a perfect onside kick that Creed Parker recovered. Eight plays later, Cash breezed in from the wildcat and Hewitt took a 21-7 lead with 11:35 left before halftime.

“That was a big play in the game,” Floyd said. “We’d noticed that on film during the week and decided to take a chance on it.”

The defense turned in the next big play, throwing Legas for a big loss on fourth down.

It took five plays for Hewitt to stretch the lead as Cash scored from the 1 to make it 28-7.

The Eagles went three-and-out and the Huskies scored on their fifth straight possession. Adair connected with Logan Pitts and Cash for nice pickups, then McElwain took it 10 yards to the 13. Igbinoghene cruised 13 yards and the extra point by Colburn made it 35-7 with 3:3o till intermission.

Oak Mountain benefited from three defensive pass interference calls n the next drive but turned it over on downs at the 19 with 48 seconds left in the half.

That was plenty of time for Adair and Company. The senior quarterback hit Cash for 19 yards, handed off to Cash on a draw for 39 yards and hit Pitts over the middle for 21 and the score. That made it 42-7 with just nine seconds left.

The Huskies squibbed the next kick. Instead of taking a knee and heading to the locker room, the Eagles tried to put a score on the board – and they did, but not how they wanted to. Legas’ wobbly deep ball was picked off by Trevor Sisk, who ran all the way across the field and sprinted into the end zone as time ran out. The PAT by Colburn made it 49-7, and all but over.

“It was an unbelievable pay by Trevor,” Floyd said. “They threw it up of grabs and Trevor saw it and is a ballhawk. And the return was impressive, made an amazing run, there were a few key blocks.”

But the Huskies finished it off when McElwain scored on a 1-yard run early in the fourth quarter and backup quarterback Grey Ryle scored on a 6-yard run as a drive of 90 yards, mostly executed by the seconds, pushed it to the 63-21 final.