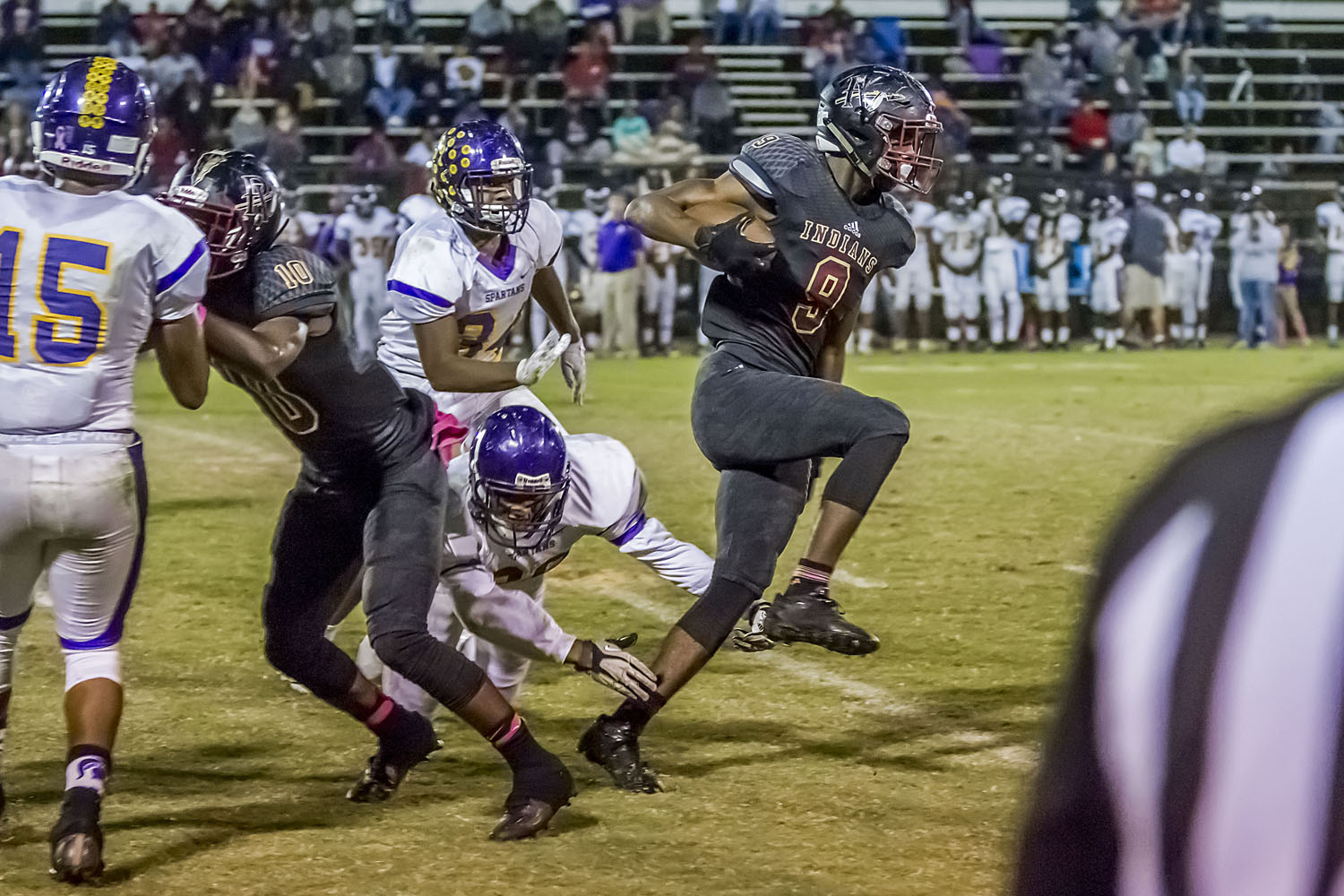 Pinson Valley end regular season with a win over Pleasant Grove, Indians are headed to the playoffs. Photo by Ron Burkett/The Trussville Tribune

Indians host Austin round two of 6A playoffs

PINSON – The Pinson Valley Indians have shot Friday night to do something their football program as never done: Advance to the third round of the state playoffs.

All that’s standing in the way of Matt Glover’s Indians is Austin. The Black Bears are a formidable obstacle, however. Glover knows the Black Bears. They beat Pinson Valley 35-7 in the first round of last year’s 6A playoffs in Decatur. Clay-Chalkville knocked them out in a 45-35 shootout in the semifinals.

“They were a semifinalist team last year. We have our work cut out for us,” Glover said, “but the good thing is we get to play another week.”

And they get a home playoff game for the first time since 2013. The Indians are 2-1 in home playoff games under Glover. In all, Glover’s teams have gone 4-6 in the playoffs in his eight seasons. Keep in mind, Pinson Valley had won just two playoff games against nine losses in the school’s 39 seasons of football before Glover became head coach in 2009.

The Indians are playing their best football at the best time. They dominated Jackson-Olin 31-5 in Ensley in round one. They’ve won seven of their last eight and three in a row.

However, when you get to this point, every team left in the bracket is playing well. Austin beat Pell City 41-19 last week in Decatur. The Black Bears (8-3, 6-1 in 6A, Region 8) have had a strange season.

They opened with a 14-10 home loss at Walker, which Pinson Valley later beat 25-14 in Jasper. But they rebounded the next week to beat 7A Bob Jones 29-14 and topped archrival Decatur 37-35 in three overtimes. Next came a 44-42 loss at Hazel Green, another puzzler. The Bears then strung together five straight wins to finish tied with Decatur at the top of the region and were champions thanks to the head-to-head win. They lost to 7A James Clemens 35-14 to end the regular season. Two of their three losses were to teams that didn’t make the 6A playoffs.

Pinson relies on the playmaking of quarterback Jackie Matthews and the running of Khymel Chaverst. When the Indians win, it’s due in large measure to the offensive line play. Receivers Liallen Dailey, Dilan Henderson and Orion Morris have been huge contributors.

Defensively, again, the line has been key. But safety CJ Rudolph and cornerback Tyus Woods lead a secondary that has been excellent.

Austin is led by running back Antonio Robinson, who has rushed for 1,276 yards on 187 carries and scored 18 touchdowns. Quarterback Paxton Montgomery has passed for more than 1,500 yards and has 18 TD passes to just six interceptions.

All four teams from Region 8 advanced to round two: Austin, Decatur, Hartselle and Muscle Shoals.