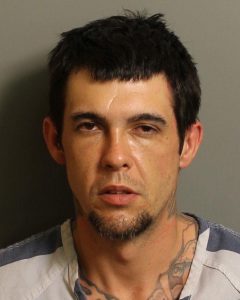 Man arrested on drug charge after chase on stolen ATV

FORESTDALE – Just after 12:30 Sunday afternoon, Jefferson County Sheriff’s Deputies received information that 33-year-old William Justin Cole was at his home in the 3500 block of McConnell Lane.

Cole was known to have an outstanding felony warrant for drug possession. He left his residence before deputies arrived, but they were given a description of his vehicle.

A deputy located the vehicle at a gas station and Cole was located inside the store. When he came out and spotted deputies, he fled on foot. Deputies lost sight of him in a backyard but found him as he drove by on a stolen ATV. He drove the ATV along Coalburg Road to I22, where he got on the interstate, and deputies followed. Once he left the interstate, Cole lost control of the ATV and wrecked. He was transported to an area hospital with minor injuries. After being treated and released, Cole was transported to the Jefferson County Jail.

Deputies later learned Cole had broken into a garage to steal the ATV in an attempt to escape.

Cole is in the Jefferson County Jail on the original charge of unlawful possession of a controlled substance, with no bond. Additional charges that are pending are burglary in the third degree, theft of property in the first degree and attempting to elude.