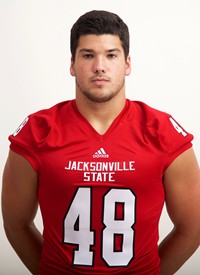 Roberts, a sophomore defensive end, and teammates Justin Lea and Dalton Campbell were named to the Academic All-District Team for District 4, which includes all Division I schools in Alabama, Georgia, Florida and South Carolina.

Roberts has been a huge part of the success in a JSU defense that leads the nation in total defense, allowing just 259.6 yards per game. They also lead the nation in third-down defense, allowing opponents to convert on third down just 23 percent of the time. The Gamecocks are second nationally in fewest first downs allowed, 16th in passing defense and seventh in rushing defense.

Roberts plays a key role in the JSU defensive front and pass rush while holding a 3.75 GPA as a business management major. The 6-foot-3, 251-pound redshirt has also started four games on the end for Jax State this season, notching 2.5 tackles for a loss and 1.5 sacks so far in 2016.

The Gamecocks are 8-1 with only a loss to LSU to blemish the record. They played Murray State on Saturday.