Huskies host Titans in rematch with semifinals on the line

TRUSSVILLE – The Hewitt-Trussville Huskies are just two wins away from a Class 7A state championship berth.

The Huskies (11-0) had no trouble with Oak Mountain in round one, handing the Eagles a school-record 63 points allowed.

That means nothing Friday night when the Titans run onto Husky Field for a 7 p.m. kickoff.

Neither does the fact that Hewitt beat its Region 4 foe 28-14 back in the third game of the season. It’s win or go home time, now.

The Titans (6-5) finished with four straight regular-season wins, then knocked off Mountain Brook 15-7 last week in what most would call an upset. 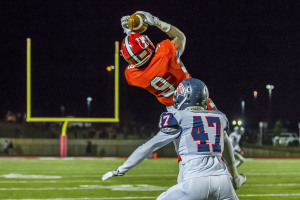 “Gadsden City, we knew when we played them, that if they got it together on offense, they have the weapons … and they did,” said coach Josh Floyd. “They’ve been scoring 40, 50 points a game the last four or five weeks. I’m not surprised at all they won. I really thought they had a good chance to win. Our region did well, I think it’s a tough region this year. I’ve been trying to tell everybody that Region 4 is tough. Unfortunately, we’ve got to play them again. It’s hard to beat somebody twice, but at least we get to be at home. And we’re still playing football.”

Gadsden City running back Damon Williams rushed for 183 yards and a touchdown on 35 carries against Mountain Brook. Quarterback Ryan Sparks threw only when necessary, accounting for 100 yards on 7-of-14 passing. Place-kicker Johnathan Kilgo delivered on field goals of 21, 32 and 46 yards. Joseph Tillis made a key interception late that sealed the win.

Interestingly, Region 4 teams won three of their four matchups, while Region 3 – the supposed toughest region in the state, with Hoover, Spain Park, Mountain Brook, went 1-3. Hoover’s 31-10 win over Bob Jones was the only win for 3 over 4.

Hewitt and Gadsden City have met 12 times. The Huskies own a 7-5 lead in the series.

The winner meets the Hoover-James Clemens winner. If the Huskies should win, they would host James Clemens or travel to Hoover.

Kickoff is 7 p.m. ay Hewitt-Trussville Stadium. Tickets are $8 for all and available at the school, through PrepTix, at Bryant Bank, Carroll Pharmacy and Nelms Pharmacy.