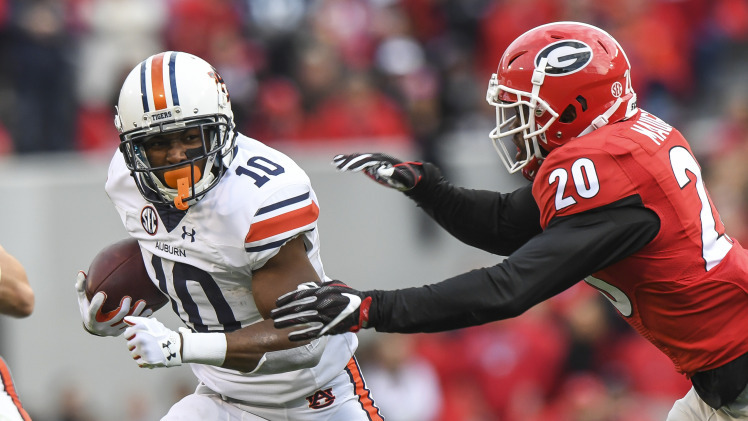 Auburn's Stanton Truitt makes a move on Georgia (via auburntigers.com)

Pettway, who has 1,106 yards rushing this season, didn’t dress for the game because of a leg injury. The Tigers stumbled without him, especially in the second half.

The Tigers finished with 164 yards as Georgia snapped Auburn’s six-game winning streak. The Tigers are 7-3 overall and 5-2 in the SEC.

Auburn led 7-0 at halftime, but Maurice Smith intercepted Sean White and returned it 34 yards for a touchdown just 23 seconds into the second half to tie it at 7-all.

The Tigers couldn’t find their way in the third quarter, gaining just 19 yards. Georgia used that to finally take a 10-7 lead early in the fourth quarter when Rodrigo Blankenship kicked a 45-yard field goal. Blankenship missed a 49-yard try a few minutes later. But Georgia got the ball back, ate up the clock and added a late field goal.

Kerryon Johnson assumed his duties as Auburn’s primary back, the one he had when the season began, with a workhorse 15 carries in the first half for 74 yards. He completed a pass and caught a pass, too. Auburn didn’t stop there. Without Pettway, the Tigers pressed their play calling with and end around to Eli Stove, a 16-yard run by White and a 6-yard run by H-back Chandler Cox.

Johnson took a direct snap and darted up the middle on a 3-yard touchdown run with 28 seconds left in the first quarter. The rest of the first half was played, mostly, between the 20s.

White was limited to seven throws and four completions. Georgia mixed it up with 17 pass attempts and 16 rushes. The Bulldogs won the stat battle in the first half by going for 161 yards.

But Auburn had the points and a 7-0 lead at halftime.