The incident occurred at Clay-Palmerdale Road and Alabama Highway 75. The driver refused to stop and a chase insued, traveling north on the highway into 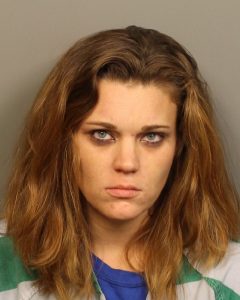 Blount county and through several residential neighborhoods. The chase then traveled back down Highway 75 to Miles Spring Road in Palmerdale, where the truck struck a parked sherrif’s office patrol unit, damaging the bumper. The chase continued south on Highway 75 to Tapawingo Road, where the driver lost control of the vehicle and wrecked.

Vineyard was transported to the Jefferson County Jail where she’s being held on probation violation of burglary in the third degree, resisting arrest, attempting to elude and reckless endangerment. There is no bond.

An adult male passenger in the truck suffered minor injuries and was transported to the hospital. No one else was injured during the incident.