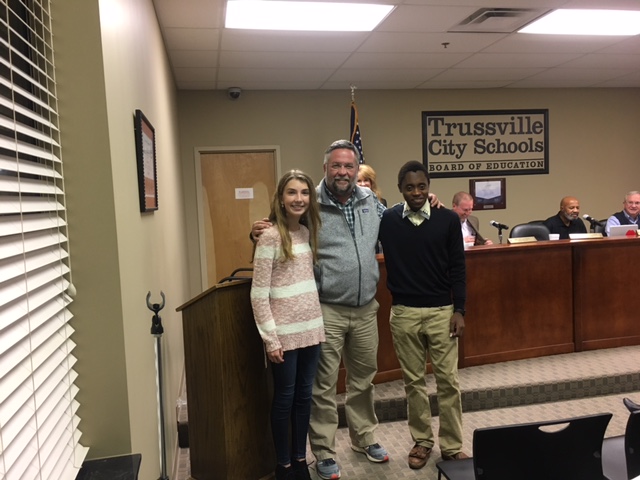 TRUSSVILLE – During Monday’s Trussville City Schools Board of Education work session, the bomb threat at Magnolia Elementary School on Nov. 16 was the primary topic of discussion.

Superintendent Dr. Pattie Neill said each Trussville city school has a crisis binder provided by the state, which is updated by the board of education annually outlining all procedures and policies. The board updated the binder in September, and this is what was used on Nov. 16 when Magnolia went into full lock down, and all other schools went into soft lockdown mode.

There are four components addressed in the crisis section of the binder, including structural recovery, fiscal and financial recovery, academic recovery and emotional recovery. The first two components didn’t need to be addressed, and Neill said she is confident that teachers will step up to make up time lost in the realm of academic recovery. However, parents and teachers alike have been most concerned about the emotional recovery of the children.

Dr. Autumm Jeter, principal of Magnolia Elementary School, said that no child was panicked, alarmed or uninformed, and no children cried during the incident, which is what most parents were concerned about. Jeter said that the lockdown went into effect at 10:03 a.m., and all children and faculty were safely in the shelter by 10:06 a.m.

“I went into all four rooms in our tornado shelter and read a statement distributed by the school system,” Jeter said. “The little kids didn’t know what a ‘suspicious package’ was, so I told them something weird was outside the school.”

Board of Education President Sid McNeal said of the children that checked out of school following the incident, they all had smiles on their faces.

“They didn’t understand anything other than they got to watch movies and eat an extra snack,” McNeal said. “It was exciting to see us in action taking care of something as important as that. We’re so thankful our public safety force was out in force, it was a great time for the city of Trussville at a time we hope will never occur again.”

Neill, McNeal and Jeter all agreed they were thankful that the school was equipped with a tornado shelter.

“The use of the tornado shelter for this kind of thing was a novel idea, but it went well,” Neill said.

The only area that Neill said needed improvement was communication systems inside and outside the shelter, as the wireless connectivity inside is weak. Neill said there will be a landline installed in every shelter to help with communication whenever the shelter needs to be used again.

The school system must have three debriefings following an incident like this. The first debriefing took place Monday with Magnolia administrators, the second will take place Tuesday with all TCS principals, and the final will take place next week with Trussville city officials.

“I don’t ever want to be part of a process where something happens in a perfect way, things can always be done better,” McNeal said. “This is a great way to bring about improvements when there’s no harm done.”

When the board moved from work session to the official meeting, it was standing room only to recognize a number of student athletes. 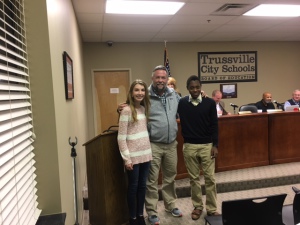 The HTHS lacrosse program is in its third year and went 12-2 this season, ranking number one in the last eight weeks of the season, going on to play in the state championship. The team had three All-State players, Carter McAlpin, Will Altman and Mitchell Peterson. Four athletes also signed lacrosse scholarships.

HTMS cross country runner Amelia Brady was the first place winner of the girls metro championship meet. She also ran for the HTHS varsity team for sectionals and the 7A championships, finishing 11th overall.

HTHS cross country runner John Ngaruiya finished the 7A championship in second place by one tenth of a second. Both Ngaruiya and Brady earned All-State honors.

The next Trussville City Schools board meeting will be December 12 at 6 p.m. Work session will precede at 4:30 p.m.