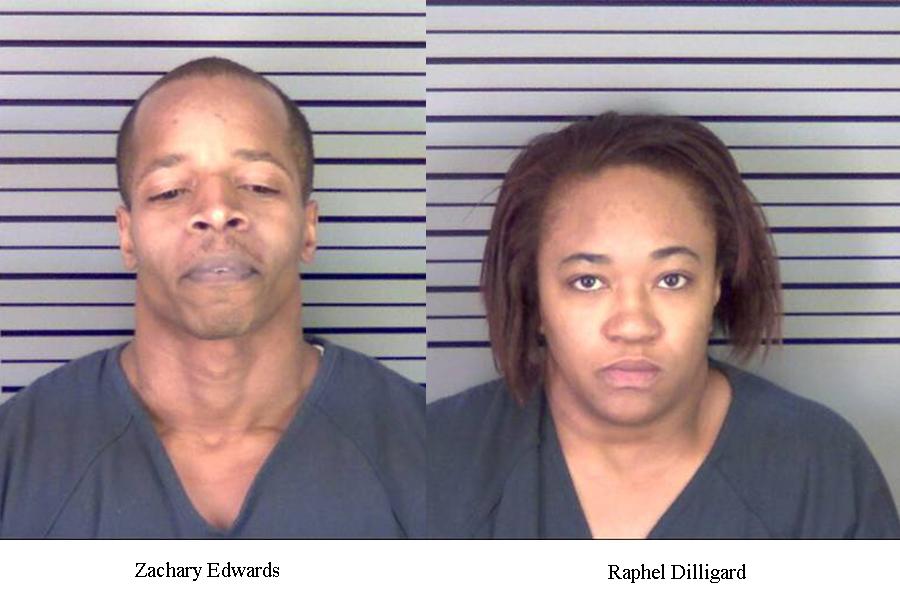 Zachary Edwards and Raphel Dilligard of Birmingham were charged with the incident involving a suspicious explosive package found at Magnolia Elementary in Trussville. Photo via the Trussville Police Department

TRUSSVILLE –The Trussville Police Department along with the ATF, and investigators from the Metro Area Crime Center worked together in the apprehension of Zachary Edwards, 35, and Raphel Dilligard, 34,  of Birmingham. According to Trussville Police Capt. Jeff Bridges, the suspects are in a dating relationship and live together.

Both subjects have been charged with possession of a hoax destructive device, rendering false alarm, and making terrorist threats for the incident that occurred on November 16 at Magnolia Elementary School, Bridges said in a statement released Wednesday. 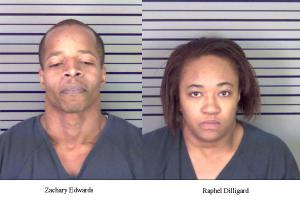 Zachary Edwards and Raphel Dilligard of Birmingham were charged with the incident involving a suspicious explosive package found at Magnolia Elementary in Trussville.
Photo via the Trussville Police Department

Bridges said investigators have obtained a confession of the incident that led the lock down of the elementary school and the soft lock down of all Trussville schools. Bridges said Edwards made the 911 call that caused the school to go into lockdown, disguising his voice as a female’s when he did so.

According to investigators, Edwards claimed to be a member of the Black Panthers and the Black Mafia. He allegedly said he intended to get the cops in one location to shoot them before saying he intended to use the incident as a diversion to rob a bank.

Bridges said the suspect told investigators that when he drove to a local bank, he aborted his plan because a Trussville patrol unit was in the parking lot.

“When the call about a suspicious package came in, we notified all of our school resource officers and told them to check the grounds at all schools for anything suspicious,” Bridges said. “Because we were concerned about the possibility of a diversion, we sent all available units to banks, jewelry stores or any other location that may get hit and told them to be as visible as possible. That’s why the suspect saw one of our guys in the bank parking lot.”

The cell phone used to make the 911 call was key in leading law enforcement to the suspects. The caller, that police now believe to be Edwards, said he knew what a bomb looked like and there was a bomb on a vehicle outside Magnolia Elementary School. The school SRO was sent outside to check the device. He photographed the suspicious package and sent the photo to his commanders who called in the Jefferson County Sheriff’s Office bomb team. Subsequently, the ATF and FBI joined the investigation.

The package contained a digital timer and wires that were visible from the outside. Inside, ATF agents found gunpowder and Play-Doh. The package was designed to resemble a bomb, but was missing a key element that would have caused detonation.

Bridges said the phone had previously been registered to the suspects who lived in the East Lake area of Birmingham, but they told investigators they no longer had the phone.

Investigators found that the timer used in the device was sold only at Walmart. The investigation showed that only three had been sold recently. Officers checked the one that had been sold at the Walmart in Irondale and a review of the security tape showed the female suspect purchasing the timer.

Edwards had been charged in 1999 and 2006 with attempted murder and was convicted on the 1999 charge. He served three years of a 15 year sentence before being released.

“These arrests indicate the collaborative effort by federal, state and local authorities realizing that explosive related incidents are a crime of violence by placing innocent people’s lives and property in harm’s way,” Michael Knight, Public Information Officer with the Nashville Division of ATF, said. “ATF’s Frontline strategy utilizes every available resource to make our communities a safer place to live.”

From the experience, Bridges said the Trussville Police Department learned that there is no day that is routine.

Choat opened the conference, saying it was both a good and a bad day for the city of Trussville.

“The work that was done between our local enforcement officers, the ATF, Sheriff’s Department, was all magnificent,” Choat said.

Choat said all parties involved reviewed what happened and were all satisfied with the work that was done.

“I can’t be more thankful to our local authorities,” Choat said.

Agent Hyche has worked in three major cities over the course of his 28 year career, and said he’s seen many hoax devices and suspect packages over that time period.

“I’ve never seen this well-orchestrated and rapid a response time,” Hyche said. “A lot of these times these things aren’t taken very seriously, but everybody treated this like this was a school with our kids.”

They are expected to be transferred to the Jefferson County Jail later on Wednesday. There is a possibility that federal charges will follow.