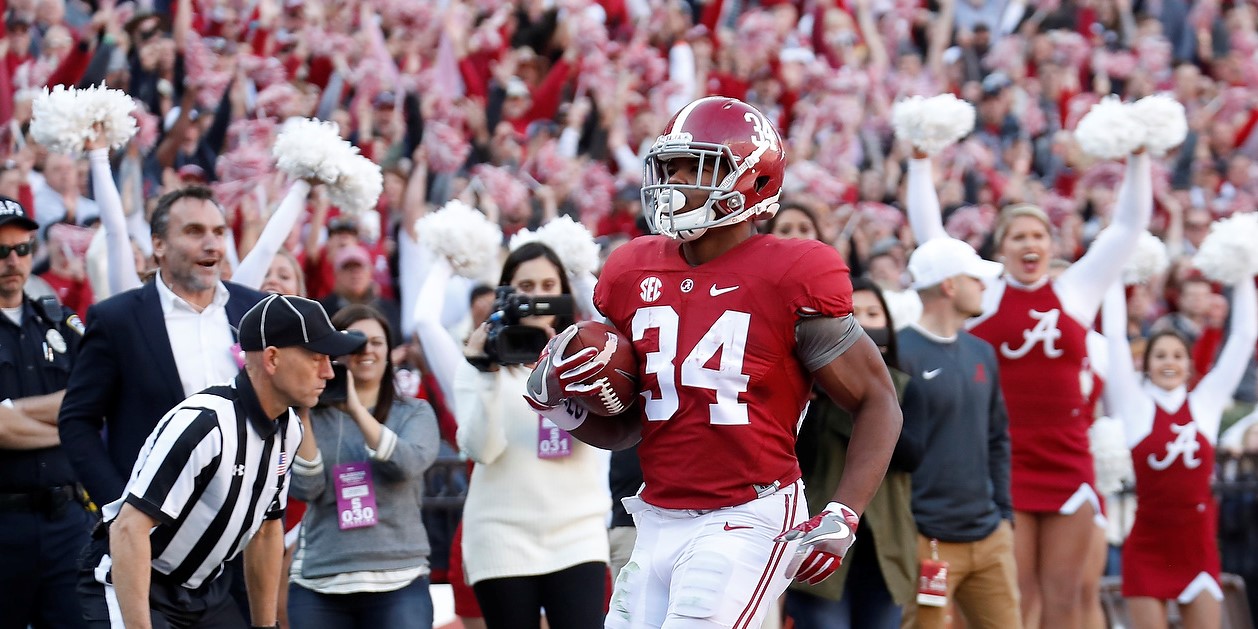 TUSCALOOSA  – The No. 1 ranked University of Alabama football team closed out its regular season with a 30-12 home win over No. 13 Auburn in front of a sold-out 101,821 crowd in Bryant-Denny Stadium.

As a team, Alabama covered 501 yards in total offense on 81 plays while the Crimson Tide defense held Auburn to 182 yards on 45 plays, including just one first down in the first half and seven total. Freshman quarterback Jalen Hurts through for 286 yards on 27-of-36 passing, with two interceptions and two touchdowns. Hurts also scored a rushing touchdown. 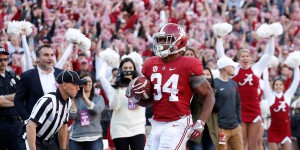 Alabama chose to receive the opening kickoff. Hurts opened the game with a 12-yard completion to wide receiver Gehrig Dieter, but the Tide gained only six more yards after that, all on a Damien Harris rush up the middle, forcing a punt. Auburn’s Stephen Roberts took JK Scott‘s 36-yard punt on the run at the Tiger 21 and raced past the pursuit 58 yards to the Tide 21. Scott shoved Roberts out of bounds to save a touchdown. From there, Auburn quarterback Jeremy Johnson threw two incompletions and a shovel pass from quarterback John Franklin to fullback Chandler Cox lost three yards, bringing placekicker Daniel Carlson on for a 42-yard field goal attempt, which was good, giving Auburn a 3-0 lead with 12:31 left in the first quarter.

After a touchback on the kickoff, Alabama moved 64 yards on 13 plays before finishing off the drive with a 29-yard field goal by placekicker Adam Griffith to even the score at 3-3 with 5:40 left in the first quarter. Hurts opened the drive with a seven-yard completion to wide receiver Trevon Diggs, followed by a one-yard run by Harris. Hurts lost four yards on the next play before picking up 17 yards and a first down with a rush up the middle. Harris was stopped for no gain before Hurts connected with Stewart on a shovel pass that picked up 19 yards and another first down. An eight-yard pass from Hurts to wide receiver Cam Sims gained eight yards before an offside penalty on Auburn gave Alabama another first down. Hurts flipped the ball to O.J. Howard in traffic for a 9-yard gain before the drive stalled at the Tiger 11, bringing out Griffith to tie the game with the field goal.

Auburn gained one yard on its next drive, going three-and-out and punting the ball 39 yards to the Tide 37, where Alabama’s Trevon Diggs returned the kick eight yards to set up the Tide on its 45-yard line. A one-yard shovel pass from Hurts to Stewart opened the Tide drive before the two connected for a 39-yard completion on a crossing pattern. Hurts then found Harris for a 17-yard touchdown pass. Griffith made good on the extra-point attempt, putting the Tide on top, 10-3, with 2:49 left in the first period.

After moving three yards in three plays, Auburn punted the ball 38 yards to the Tide 34 where Diggs caught the ball, fumbled it, picked it up and lost eight yards back to the UA 26. During the return, Alabama’s Tony Brown was called for targeting and ejected from the game. The ball was placed on the Tide 13-yard line. Hurts opened the drive with a seven-yard completion to Stewart before Harris carried for 12 yards to the Tide 32 before Hurts gained three yards on a quarterback draw to end the quarter.

On the first play of the second quarter, pass by Hurts was intercepted by Auburn defensive back Daniel Thomas, giving Auburn the ball on the Tide 41-yard line. Auburn moved the ball six yards following the turnover, before Carlson kicked a 52-yard field goal through the uprights to narrow Alabama’s lead to 10-6 with 13:38 left in the half. Alabama went three-and-out on its next possession. The Tide defense then forced the Tigers into a three-and-out. Following the Auburn punt, the Tide started its next drive on its own 19-yard line with 10:03 left in the half.

After moving 12 yards on its first three plays of the drive, Alabama picked up big yardage on back-to-back plays, including a pass from Stewart to Howard that gained 12 yards and a 20-yard rush by Harris to the Tiger 37. The drive was snuffed out when Hurts was intercepted by Thomas on the Tiger 30. Thomas returned the pick 29 yards to the Tide 41 before Dieter brought him down.

On first down, Auburn gained 13 yards to the Tide 23 on a Kerryon Johnson rush. He rushed for three more yards on the next play before Jeremy Johnson picked up eight yards on back-to-back passes, first to wide receiver Jason Smith and then to wide receiver Eli Stove. On fourth down from the Tide 22, Auburn sent out its field goal unit and Carlson converted from 39 yards out to push the score to Alabama 10, Auburn 9 at the 3:30 mark of the second quarter.

Starting on its 34, Alabama opened the next possession with two rushes by Harris which totaled two yards. Hurts then unloaded a 25-yard pass to wide receiver Calvin Ridley to the Tiger 39 and a first down. Hurts followed that with a 13-yard toss to Howard for another first down. Hurts then scrambled for nine yards to the Tiger 17. Scarbrough came in and rushed for four yards and a first down at the Tiger 13. Alabama managed three more yards on another Scarbrough rush before Griffith came on and made a 25-yard field goal, putting Alabama up, 13-9, with 16 seconds remaining in the half.

Auburn downed the ball on the next offensive play, ending the first half.

At the half, Alabama had gained 263 yards of total offense on 44 plays while Auburn had managed 31 yards on 20 offensive plays. Hurts was 18-of-25 passing in the first half for 182 yards and a touchdown with two interceptions. Harris led` all rushers with 39 yards on seven carries while Stewart led all receivers with 83 yards on eight receptions, including a long of 39. For Auburn, Jeremy Johnson was 3-of-9 passing for seven yards in the first half with Smith leading the Tigers with one reception for five yards. Kerryon Johnson was Auburn’s leading rusher at the half with 19 yards on three carries.

Auburn started the second half with the ball and a three-and-out drive that included a three-yard rush by Kerryon Johnson, an incomplete pass and a five-yard sack of Jeremy Johnson by Alabama linebacker Ryan Anderson. A 41-yard punt gave Alabama the ball on its 43 yard-line.

Tide running back Bo Scarbrough opened the Alabama possession with a one-yard rush before busting out over the left end for 20 yards, giving Alabama a first down on the Tiger 36. Another six-yard run by Scarbrough led to a six-yard pass from Hurts to Ridley for another first down. Scarbrough ran four yards to the Tiger 20, moving the Tide into the red zone. Hurts then connected with Howard for 14 yards to the Auburn six-yard line, bringing up first-and-goal. Hurts picked up two on first down before slashing to the right pylon, scoring on a four-yard run to notch his 12th rushing touchdown of the season. Griffith’s extra point was good and Alabama led, 20-9, with 9:58 left in the third quarter.

Auburn picked up its second first down of the game on the first play of its second drive of the half, when Jeremy Johnson completed a slant pass to Will Hastings for a gain of 27 yards to the Tide 48. It picked up another first down when a pair of Johnson rushes, the first by Kerryon for six yards and the second by Jeremy for four, moved the chains. A three-yard pick up by Kerryon Johnson, followed by a pair of incomplete passes by Jeremy Johnson, brought out Carlson and the Auburn field goal unit. Carlson’s kick from 52 yards out was no good, wide left, giving Alabama the ball on the Tide 36 with 8:20 left in the third.

After a five-yard offside penalty by Auburn started the Tide drive, Scarbrough bulled his way for 15 yards to the Tiger 44. From there, Alabama gained five yards on three plays, bringing up fourth-and-four on the Tiger 38. Hurts found Stewart with a 38-yard sideline pass that Stewart took into the end zone, turning up field to leave a defender flying before evading a tackler at the Auburn 5 before reaching the end zone. Griffith’s point-after kick was good, and Alabama moved ahead, 27-9, with 5:16 left in the third period.

John Franklin came in at quarterback for the Tigers and moved the ball 65 yards on nine plays, eating 3:05 off the clock and bring out Carlson for another field goal attempt, which was accurate from 27 yards. The big play of the drive was a 55-yard Franklin to Eli Stove pass that moved the Tigers to the Alabama 12-yard line. The Tigers managed two more yards before Carlson made his way onto the field.

Alabama had the ball at its 30-yard line to open the fourth quarter after moving 11 yards on three plays to earn a first down to close the third quarter. Running back Josh Jacobs broke free for a 26-yard run to the Tiger 44, then ate up another big chunk of real estate by hauling in a 30-yard pass from Hurts that reached the Auburn 14. Three straight plays for no gain brought out Griffith, who knocked home a 34-yard field goal, pushing the score to Alabama 30, Auburn 12, with 12:46 left in the game.

Auburn’s final possession began with another big Franklin to Stove hook up, moving the Tigers 30 yards to the Tide 45. The Tigers finally had momentum going in a drive when linebacker Shaun Dion Hamilton intercepted a pass by Cox on the Alabama five-yard line, ending the drive. The Tide proceeded to devour the final nine minutes of the game with 15 plays that gained 58 yards, stringing together four first downs on the march.

Undefeated Alabama enters the postseason next Saturday, December 3, by facing the Florida Gators in Atlanta, Ga., in the Southeastern Conference Championship Game. The game will be televised by CBS beginning at 3 p.m. CT at the Georgia Dome.