TRUSSVILLE –At 4:40 p.m. on Monday the National Weather Service in Birmingham issued a severethunderstorm watch for west and north Alabama, including Jefferson County until 9 p.m. 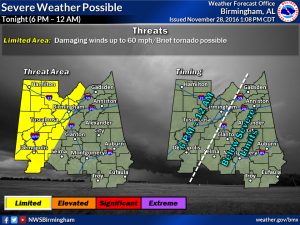 The severe weather threat that could include high winds, hail and possible tornadoes Monday night into Tuesday morning for the local area.

The threat for Jefferson will be from about 6 p.m. Monday night until about 12 midnight.  High, gusty winds from the south will raise the humidity from about 30 percent Monday morning to about 60 percent Monday afternoon which will set the stage for potentially stormy weather. The high wind gusts could knock down trees and limbs ahead of the storm line.

A second round of storms is expected on Tuesday night. There is the potential of three to four inches of rain between the two systems, a welcome sight for the drought stricken local area.