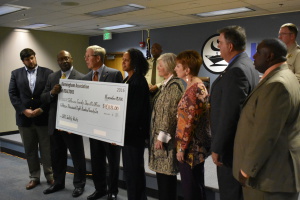 BIRMINGHAM — The Birmingham Association of Realtors presented the Jefferson County Sheriff’s Office with ,826 for the purchase of 23 bullet-proof vests for School Resource Officers Tuesday. The gift was announced during a press conference at the Jefferson County Board of Education, where Sheriff Mike Hale thanked the BAR for its generosity.

“This gift today gives us protection that can withstand multiple, high-powered rifle rounds into the chest area or the vest of a deputy sheriff,” Hale said. “It not only saves his life, it allows the deputy sheriff to keep protecting the children, keep pressing on to keep the environment safe, and– God forbid– rescue one of our students that needs help.”

Superintendent Craig Pouncey thanked the BAR on behalf of the Board of Education.

“While academics are important, athletics and other extra-curricular offerings are important, you ask a parent what’s the most important thing in their life, and they would tell you the safety of their children,” Pouncey said.

“We’re so thankful for the commitment of the Realtors’ Association, because these are some of the most valuable partners that we have,” Pouncey said of the county’s SROs. “Because they not only protect our children, but they give parents the security that they need, that they know they’re dropping their precious children off at a place that’s going to be protected and safe.” 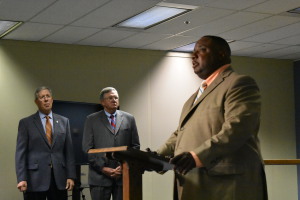 The body armor, which is designed to be seven times more effective than Kevlar vests, is equipped with a medical kit designed to stop bleeding, according to BAR CEO Cliff Long. The kits will help in emergency situations in which paramedics have not yet arrived.

Long explained that the gift came as the result of discussions between the BAR and law enforcement officers in Jefferson County.

“As we began to talk and explore about how to be a better partner in the community, we uncovered a need, and one of those needs were the protective vests,” Long said.

He encouraged other organizations in Jefferson County to look for ways to help schools in the area.

“There are many organizations who do great work in the community, but often times that community work stops short of our schools and it stops short of our resource officers,” Long said. “So I’d like to challenge every other organization like the Association of Realtors out there, step up this year in a time of need and provide a gift that keeps on giving, just as these vests.”

Long said that the gift was an attempt to create a partnership between the BAR, the Board of Education and the Sheriff’s Department.

“Together, we know that we can create safer schools and create a better environment here in Jefferson County,” Long said.